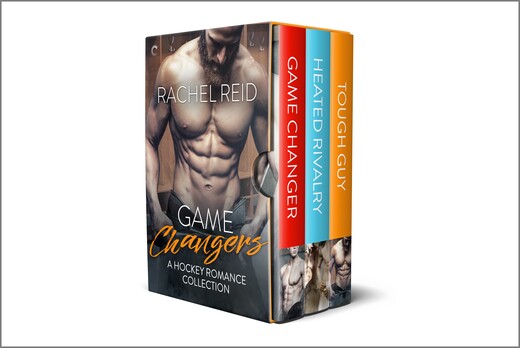 All three of Rachel Reid’s scorching M/M hockey romances, now in one volume!

“This is a sweet, satisfying romance.” —Publishers Weekly (starred review) on Tough Guy

Pro hockey star Scott Hunter knows a good thing when he sees it. When a smoothie made by juice bar barista Kip Grady precedes Scott breaking his on-ice slump, he’s desperate to recreate the magic...and to get to know the sexy, funny guy behind the counter.

Kip knew there was more to Scott’s frequent visits than blended fruit, but he never imagined being invited back to Scott’s penthouse. Or kissed with reckless abandon, nevermind touched everywhere. When it happens it’s red-hot, incredible and frequent, but also only on Scott’s terms and always behind his closed apartment doors. With playoff season approaching, the spotlight on Scott is suddenly brighter than ever. Kip is ready to go all-in with Scott—but how much longer will he have to remain a secret?

Hockey is Shane Hollander’s life. He’s got a spotless reputation, and now that he’s captain of the Montreal Voyageurs, he won’t let anything jeopardize that--especially the sexy Russian whose hard body keeps him awake at night.

Boston Bears captain Ilya Rozanov is everything Shane’s not. He’s the self-proclaimed king of the ice, and no one can beat him—except Shane. They’ve made a career on their legendary rivalry, but when the skates come off, the heat between them is undeniable. When Ilya realizes he wants more than a few secret hookups, he knows he must walk away. If the truth comes out, it could ruin them both. But when their need for each other rivals their ambition on the ice, secrecy is no longer an option…

Ryan Price may be an enforcer, but off the ice he struggles with anxiety. Recently traded to the Toronto Guardians, he’s determined to make a fresh start in the city’s dynamic LGBTQ Village. The last thing he expects to stumble upon in his new neighborhood is a blast from his past in the fabulous form of Fabian Salah.

Aspiring musician Fabian loathes hockey. But that doesn’t stop him from being attracted to a certain burly, ginger-bearded defenseman. He hasn’t forgotten the kiss they almost shared back in high school, and it’s clear the chemistry between them has only intensified.