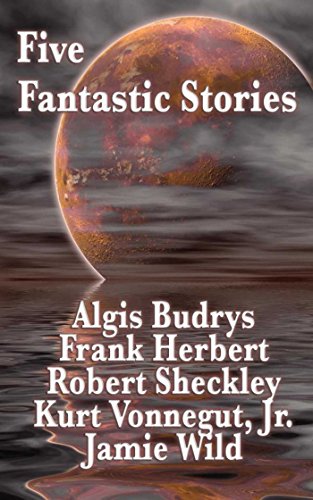 Collected her are five fantastic stories by Algis Budrys, Frank Herbert, Robert Sheckley, Kurt Vonnegut, Jr., and Jamie Wild. The Stoker and the Stars When you've had your ears pinned back in a bowknot, it's sometimes hard to remember that an intelligent people has no respect for a whipped enemy ... but does for a fairly beaten enemy. Missing Link The Romantics used to say that the eyes were the windows of the Soul. A good Alien Xenologist might not put it quite so poetically ... but he can, if he's sharp, read a lot in the look of an eye! Bad Medicine Elwood Caswell walked rapidly down Broadway with a loaded revolver hidden in his coat pocket. He didn't want to use the weapon, but feared he might anyhow. This was a justifiable assumption, for Caswell was a homicidal maniac. BR02B Got a problem? Just pick up the phone. It solved them all-and all the same way!