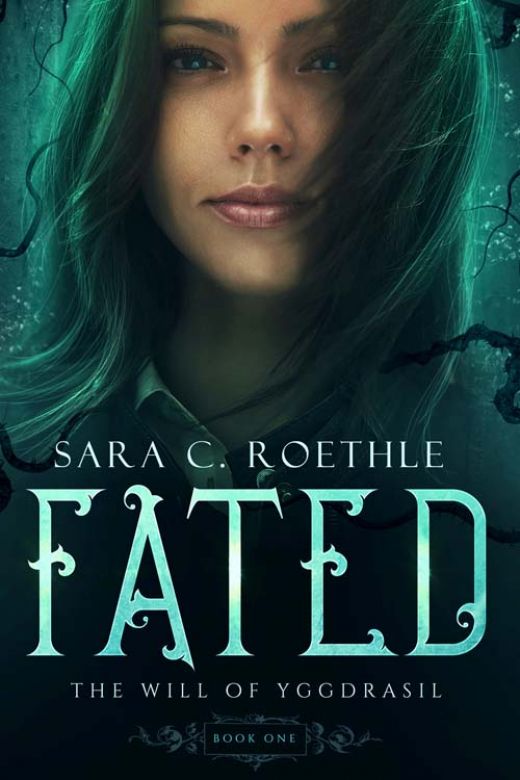 Previously the Bitter Ashes Series.The first time Maddy accidentally killed someone, she passed it off as a freak accident. The second time, a coincidence. But when she’s kidnapped and taken to an underground realm where corpses reanimate on their own, she can no longer ignore her dark gift.The first person she recognizes in this horrifying realm is her old social worker from the foster system, Sophie, but something’s not right. She hasn’t aged a day. And Sophie’s brother, Alaric, has fangs and moves with liquid feline grace.A normal person would run screaming into the night, but there's something about Alaric that draws Maddy in. Together, they must search for an elusive magical charm, a remnant of the gods themselves. Maddy doesn’t know if she can trust Alaric with her life, but with the entire fate of humanity hanging in the balance, she has no choice.FATED is Norse Mythology meets Lost Girl and the Fever Series.

Hot breath steamed across the side of my neck, tickling the tiny hairs. At first I snuggled deeper into my pillow, thinking it was a dream. Then the bed shifted as someone climbed up beside me. Fully awake now, I froze, my thoughts racing for an explanation. I lived alone, had no pets, and didn't have the type of friends that would stay the night. Whoever was sidling up beside me had broken in.

I opened my eyes to mere slits, not wanting to alert the intruder that I was awake. The room was nearly pitch black, but the curtained window let in enough moonlight for me to see the outline of a second form standing beside the bed. Judging by the build, I was pretty sure it was a man, though I was still unsure about the person in bed beside me.

I squeezed my eyes shut as the standing intruder bent at the waist, placing his hands on either side of my pillow. He continued to lean down until his face was only inches from the large artery in my neck. The one who had climbed onto the bed shifted a little closer to my feet.

The man hovering over me took a deep breath, almost like he was scenting me, then the presence lifted away. I let out a quivering breath that turned into a scream as suddenly both figures grabbed me. The one on the bed wrapped strong hands around my ankles, as the other pulled me up by my armpits into a vise-like embrace. A large, masculine palm clamped over my mouth to stifle my screaming, overwhelming my nostrils with the scent of soap and skin. I thrashed violently, but both men held fast.

My ankles lifted as the one at the foot of the bed reached the edge and stood. The intruders began moving toward my bedroom door. I screamed against the hand covering my mouth and struggled to kick my feet, hoping to loosen their grasp. I only succeeded in straining my back and a few other muscles as the figures carried me effortlessly through the dark house. I squinted to see in the dark as we neared the back door. Unable to take full breaths with the hand pressing against my mouth and nose, my screams degraded to whimpers. The other hand pulled painfully beneath my armpit. Trying to even out my body, I flung my free arm upward, but barely managed to slap at my captor’s face.

The figure carrying my feet put them both under one arm so he could fling the back door open, bathing us in a wash of chilly air. I tried to make out the features of the person holding onto my bare feet, but the clouds covering the moon stunted my vision. All I could see was the outline of broad shoulders and possibly wavy hair.

I turned my eyes skyward and began to cry, soaking the hand that covered my mouth. Stars twinkled serenely above me as we entered the woods that bordered my house. I gave up on my thrashing and let my body go limp, but it didn't slow my attackers any more than my previous strategy.

My captors continued gracefully through the foliage. I began to shiver with the cold, but it didn't seem to bother the man carrying my upper half. He radiated warmth, even though I could feel only the fabric of a thin tee-shirt against the back of my head and neck.

It seemed like we ran on for ages, but the men carrying me never tired. I closed my eyes and told myself that I was dreaming, yet the bite of cool wind and the ache in my back did their best to shatter the illusion. Eventually, we came to a stop, deep within the darkness of the woods.

I felt dizzy from moving horizontally so quickly, and didn't immediately react as I was lowered to the damp ground.

My back sank into a raised mound of earth, soft, like it had recently been turned, with loose rocks jabbing into me here and there. Moisture soaked into the back of the tee-shirt and underwear I'd gone to sleep in, chilling me further.

I tried to sit up, but hands instantly pushed me back down. Something slithered across my arm. My panicked breathing brought in the scent of damp earth and growing things while my two captors crouched over me. My first thought as the cold, rough skinned creature made its way toward my neck was snake.

My heart pounded in my throat as more things slithered over me. I pushed against the restraining hands, but I couldn’t budge them. I screamed, and one of the hands lifted from my shoulder to cover my mouth. It wasn't an improvement since now my head was being forced against the earth, hard enough that the soil scratched my scalp. Within seconds I was covered entirely with slithering objects. Some of the objects started reaching up toward the sky like tiny hands trying to grasp the moon.

The spindly creatures unfurled toward the dim light, casting eerie moon shadows onto my face. Something was wrong with them though. They had no heads, and instead branched off at the ends like no creature I'd ever seen. I wasn’t covered in snakes. They were vines. I was glad the things weren't snakes, but being slowly engulfed in living vines did nothing to ease my panic. I screamed against the hand covering my mouth until my throat went raw. I fought against the vines with increased desperation, a last ditch effort to not be buried alive, but they only bound me tighter, until I could no longer move at all. They crushed my lungs, forcing out my last gasping breath. In that moment I knew I was going to die. I managed to catch one last glimpse of stars as the last of the vines covered my face, obscuring my view completely.