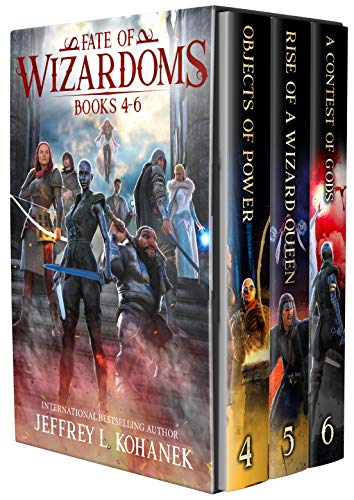 Forces of magic converge, placing the Eight Wizardoms on the brink of devastation.
The fate of the world hinges on a squad of misfit heroes caught in this conflict.
"Great storyline. Real page turner. I couldn't put it down. Excellent." - ★★★★★ Review

From Objects of Power, Fate of Wizardoms book four:

A ruthless wizard lord conquers a neighboring wizardom, increasing his magic far beyond mere mortals. The more power he gains, the more he craves.

While nations war against one another, the Dark Lord rises. An army of monsters invades, sending the world toward the brink of doom.

A team of misfits find themselves the fulcrum point of destiny, their world teetering upon their actions, certain to crumble should they fail. Led by cryptic passages from a dark prophecy, these heroes set off on two separate quests.

One expedition leads to the Enchanter's Isle, rumored to hide a mysterious object known as the Band of Amalgamation. The other involves the Arc of Radiance, a sacred object protected by a lost race of elves.

What powers might these two enchanted relics unlock?
Can they be recovered before it is too late?

This three-book box set brings the acclaimed Fate of Wizardoms saga to a spectacular conclusion.
Download and discover why readers rave about this epic fantasy series.