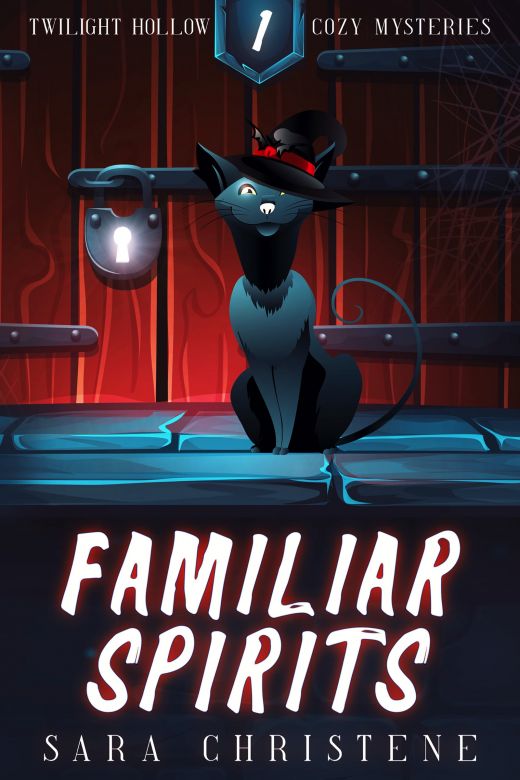 Welcome to Twilight Hollow, WA, a small forest town with three resident witches. Adelaide O’Shea runs the Toasty Bean, imbuing her coffee and tea with warm, cozy magic. When a black cat crosses her path, she worries her new pet might be unlucky, and her suspicions are confirmed when the next thing in her path is a dead man with her phone number in his pocket. And the cops aren’t the only ones breathing down her neck over it. There’s an old, dark magic in town, and it has its sights set on Addy. With the help of her two witch sisters, a handsome detective, and a charming veterinarian, can Addy solve the murder and escape the darkness? Or will her and her new spooky pet have to turn tail and run?

The last of my regulars had finally filtered out of the Toasty Bean cafe. It was 7 PM, an hour after closing time, but no one really paid attention to the hours. I turned the key in the lock, then started walking with a stack of books clutched in one arm. My house was only four blocks away, but that wasn’t out of the ordinary in Twilight Hollow, Washington. Everything was four or so blocks away.

I rounded the corner, jingling my keys in time with my low-heeled boots. I took a deep breath, reveling in the first hint of crispness that meant summer was almost over, and autumn was on its way. My curly red hair swirled around me in the breeze.

I passed the bank, and the laundromat, then headed west down Mueller Street.

I stopped walking, glancing both ways. I could have sworn I heard a cat, but I wasn’t used to seeing one on this route.

When no further meows presented themselves, I started walking again, but didn’t make it far before the toe of my boot caught on a crack in the sidewalk. The books I had clutched under one arm went flying, and I followed right after them, landing hard on my hands and knees. I nearly screamed at a sudden weight on my back.

Slowly, I craned my neck to look over my shoulder, feeling like I was in a horror movie.

A black cat stood atop my back. “Meow.”

I glared at the creature. “Can I help you?”

She, or he, I wasn’t sure, hopped down from my back and circled in front of me, sitting down near my fallen books. I was glad it was just a cat seeing my books and not one of my sisters. A natural which shouldn’t need to study witchcraft, but I was pretty sure I was defunct.

The cat watched me with amber eyes. It was skinny and a bit mangy.

I pushed myself up, sitting back on my heels. “It looks like you haven’t had a meal in a while. Do you want to come home with me?”

“I’ll take that as a yes.” I gathered my books, then stood and looked down at the cat. “Are you going to let me pick you up?”

I took that as another yes, and knelt beside the cat, scooping it up with my free arm. The cat did not protest, and we started walking.

“You know black cats are supposed to be unlucky,” I said as we continued on. “But I think that’s just silly superstition. Maybe having a black cat will make me a better witch.”

The cat and I both startled at the sound of a falling trashcan around the next corner. I stopped long enough to register what the sound was, then continued on, thinking little of it. That was, until I went around the corner. I saw the fallen trashcan, and beyond that a pair shoes. A pair of shoes still attached to feet, with the toes sticking up skyward.

I glanced down at the cat, then over to the pair of shoes. It was getting dark. My eyes had to be playing tricks on me. Holding my breath, the cat, and my books, I crept forward. I peered over the trashcan at the owner of the shoes. Neil Howard lay sprawled on his back, dead as a door nail.

I dropped my books as I stumbled back, but managed to maintain my hold on the cat. Fortunately the creature didn’t struggle, even though I was careening away like a mad woman. I glanced frantically around the street. I had heard that trashcan fall, and Neil’s death was not a natural occurrence. I could tell that much by the knife sticking out of his chest.

Keeping my eyes trained on my surroundings, I pulled my cell phone from my back pocket and dialed 911.

Before the woman on the other end could say her spiel, I blurted, “I need to report a murder!”

I followed her instructions and stayed on the line, and the cat stayed calmly in my arms. Eventually the sirens came, and I spotted the flashing lights. In a small town, cops responded fast. It was a perk I’d hoped to never experience.

The two uniformed officers, a man and a woman, barely looked at me and the cat as they rushed over to Neil. One checked his pulse, even though he was clearly dead. Ambulance sirens wailed in the distance.

The male officer walked toward me, while the female stayed with Neil, watching over the corpse like someone might come snatch it away.

The officer who reached me was mid-fifties, salt and pepper hair, a bit of a paunch hanging over his dark blue slacks. “I take it you’re Adelaide O’Shea?” At my nod, he continued, “What were you doing when you found the body?” He noticed my books on the ground, and proceeded to stare at them.

I chewed my lip, clutching the cat like it was my favorite stuffed animal. “I was just walking home from work. I heard the trashcan fall, and came around the corner to find Neil.”

His bushy brow raised. “Walking home from work with your pet cat?” His tone oozed skepticism. He looked down at my books again.

I felt my cheeks going red. Everyone knew that witchcraft wasn’t real. This cop clearly thought I was a nut, walking around with my black cat and spell books. It would serve him right if I hexed him, but I’m not particularly good at hexes. I could always ask my sister, Luna, to do it. She was the queen of hexes.

The ambulance arrived, saving me from answering any further questions for the moment. Along with the ambulance came an unmarked cop car. The officer questioning me looked at the car with a scowl, which deepened as a man stepped out.

The newcomer surveyed the scene quickly, his dark eyes ending up on me. He flashed a badge as he approached. “Logan White, homicide. Did you find the body?”

I snapped my mouth shut, afraid I might start drooling. He was the definition of tall, dark, and handsome. His skin, hair, and features hinted at Native American heritage. He was around six foot, a little on the thin side but definitely in shape. Maybe a runner.

I nodded a little too quickly as the paramedics exited the ambulance and walked toward the body. Though one still checked the pulse, it was clear they knew dead when they saw it.

“Did you see anything else unusual?” the detective asked, drawing my attention back to him.

My brows knit together. “You mean other than the knife sticking out of his chest?” I shook my head. “I heard the trash cans fall before I came around the corner, but I didn’t see anyone else around.”

He looked me up and down, his eyes first lingering on the cat, then on my fallen books. His eyes lifted back to me. “Give the officer here your details and head home. I’ll call you if I have any more questions.”

The officer opened his mouth as if to argue, but one look from Detective White made him shut it.

I set the cat down so I could gather up my books. The creature twined around my ankles while I gave the officer my information. With a final look at the body, I scooped up the cat, then hurried home.

Maybe the cat was unlucky after all, but I couldn’t bring myself to set it free. We both needed a nice meal and a warm bed, and things would be better in the morning.