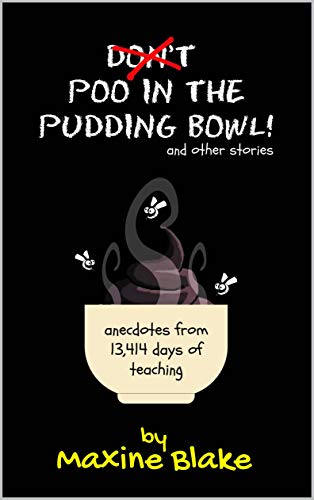 They never taught me how to handle this during teacher training at university.
I work in a world with hormonal teenagers, inappropriate proposals, the full spectrum of bodily odours and the odd indecent exposure.”

Ever wondered what life is like as a teacher? Or what happens on school or college trips? Perhaps you've speculated on what your teacher really thought about the students?

Don't Poo in the Pudding Bowl answers these questions and more! Including 34 real-life stories about teaching teens in Sheffield, this book reveals exactly what happens behind those school doors. Maxine Blake, a teacher for 37 years, takes the reader on a whirlwind tour of classrooms, school trips and student shenanigans, with plenty of awkward, embarrassing and laugh-out-loud funny moments along the way. From students escaping out of windows to conversations about farting pigeons, these stories will have you clutching your sides with laughter.

Captivating, moving and side-splittingly hilarious, Don't Poo in the Pudding Bowl is a must-read full of insights about the life of a teacher. Welcome to life in the classroom!

A collection of short stories describing teacher/student interactions interjected with comedy moments, drama and of course teenage toilet humour. Don't Poo, is a humorous memoir, collated throughout Maxine's years of teaching. Perfect for your coffee table , bathroom reading or a dinner party conversation starter.
A great gift for those parents who ever wandered what their children get up to in and out of their classrooms whilst at school or if you want to re live your childhood shenanigans with your friends. A reminder for teachers of what they've been through and more importantly, what is left to come.

(Word of the day. This one’s all about me)

It was a new academic year and the class of level three (pre university) boys were still showing me their best side and were a delight to teach. I had decided to give them an in-class assessment (cruel I know, as I didn’t have to) but just to be a little nicer, I allowed them access to textbooks for the latter half of the assessment.

I had just returned to work after a lengthy absence following my travels to Bolivia and Peru. I had picked up some bug or parasite, losing one and a half stone in the process over two weeks. I understand that many of you might say that losing weight is every woman’s dream, but after a few weeks of still having to use the toilet and sink for simultaneous expulsions, you can understand that I desperately needed an end to this.

(I apologise for that image, which may stick for a while).

That morning at home, I tried on a number of different clothing options, thinking, should I wear my favourite shirt? No. too big. Hmm. I didn’t need any more attention than is necessary when I had a class full of giddy hormonal seventeen-year-old boys. In the end, I chose a long knitted top that rested just above my knees (which helped to hide my out-of-control breast appendages) and teamed it with a skirt that settled nicely on my knees. You’ll soon see where I’m going with this. Once in the classroom with my level three boys, and that assessment, I chose to place them in rows (old-school style) facing the front of the class, as opposed to their usual groupings of four to six in tables around the class. I then set them off on their assessment task.

After twenty minutes, one of my colleagues walked into the class, or I should say hobbled in as she too had been absent recently but with a bad back (not a great start for the sport staff). She walked towards the back of the class, where the tambour units were situated, to retrieve the textbooks for her next lesson. The lock can be a little tricky, and I didn’t want her to aggravate her back any further, so I got up to help her.

As I stood up, I heard a rustling sound. The noise was unfamiliar so I couldn’t place its origin and thought that it was in my mind.

As I began to walk down the centre of the class, I realised that the sound wasn’t a figment of my imagination, as the noise was also travelling with me. The rustling continued to increase in both sound and pace, in time with my own strides. With each additional step, I my skirt was slowly making its way past my knees, almost Matrix style.

The noise, I soon realised, was my skirt lining succumbing to gravity and sliding down my legs. By the time my head had made the mental connection, my waistband had already passed my knees and was heading for the floor.

My head said, You have two choices. (I know what you’re thinking: really, at this stage? You gave yourself options?) Yes, I had options, or so I thought...

Step out of the skirt, put it over my shoulder and carry on walking as if nothing had happened (this was an obvious non starter).

Slow down, pull the skirt up, hold onto it for dear life and make the best of a catastrophic moment.

My inner voice said, thank God (and I really was) you’re a woman of colour or you would be a deep shade of red right now. Well, my whole body was on fire with embarrassment.

I chose option number two. Well, number one was a nonstarter. If at all possible, I needed to retain some semblance of dignity.

Remember I’d said that the boys were facing me? Slowly a few sniggers began to develop; my colleague Louise and I looked at each other. She noted my dilemma and looked mortified (we did that eye contact thing, my eyes said help, hers said s**t!). She quickly took control.

“What is your problem?...You’re supposed to be focussing on your assessment and impressing us with your knowledge. Just get on while me and Maxine sort out a little issue.”

All eyes went down. It worked, or so I thought. Remember the students were new to the college and hadn’t found their feet or voices yet.

Parts of my skirt had, by now, hit the floor. I carried on walking, stooped, and, with my left hand, grabbed my waistband that was now well below my knees. I lifted it up, closed the zip and continued slowly towards the tambour unit without a break in my stride pattern. I unlocked the unit, looked at Louise and exhaled then, after slowly returning to my seat, swivelled my chair towards the computer and stared at the screen as if it was normal practice.

Remember my clothing choices? Thank God for that long top.

The voice inside my head was gathering momentum (&*?>@<: *&^%  &^%$££ – I’ll let you provide your own interpretations here). There were really no words to express my emotions or situation.

Eventually, my inner voice said, Note to self, get a safety pin later.

I dismissed the class at the end of the session, knowing that facing them again a few hours later would be torturous.