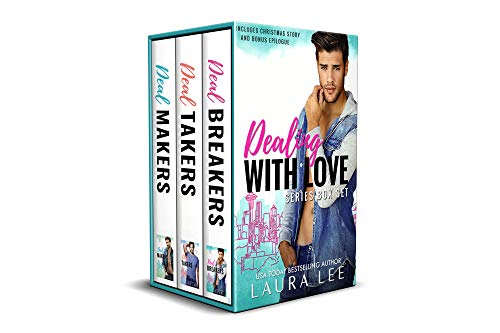 From USA Today bestselling author, Laura Lee, comes a series of sexy romantic comedies you're sure to love. This box set contains three full-length novels, a holiday story, and a bonus series epilogue! Find out why readers are saying these books are the perfect combination of sweet, swoony romance and laugh out loud hilarity!

What happens when your best friend accidentally becomes your baby daddy?

"I'M A VIRGIN AND YOU NEED TO RELIEVE ME OF THAT."

What respectable guy could say no to that? Yeah, she was my best friend. But she was also the hottest chick I'd ever known. I thought it would be simple. I thought we'd have a good time, then pretend like it never happened.

It turns out, I was an idiot.

Now, she wants nothing to do with me, but I'm determined. I've spent the last five years without her and I refuse to waste another day. I have a solid plan. All of my figurative ducks are in a row. I'm going balls to the wall, and I'm not stopping until I win back the only girl I've ever loved.

Too bad for me, Devyn Summers was sitting on a secret that nothing could've prepared me for.

Who knew a little blue pill would lead to a meet-cute you'll never forget?

MY DICK CAN BE A REAL BASTARD SOMETIMES.

When he takes charge, I've been known to do a lot of stupid shit, despite the fact that I have a genius IQ. Case in point: How I met the woman of my dreams.

Now, I'm going to let you in on a little secret: I don't regret that moment of idiocy one bit. It may have been one of the most embarrassing moments of my life, but you know what they say about first impressions, right? Well, I can guarantee that I made quite the impression that evening. (Don't worry; I'll tell you all the gory details later.)

Most days, she acts like she hates me--probably because I behave like an ass-- but we both know the truth: Rainey O'Neil wants me just as much as I want her--she just doesn't want to admit it.

Good thing I've never been one to back down from a challenge.

Waking up hungover in Vegas is bad enough. Finding out you accidentally married your best friend's sister is even worse.

I mean, not literally, because that would be disgusting. But I did break one of the cardinal rules of Bro Code, which is equally appalling. You see, I fell for my best friend's sister after he explicitly forbid me to go near her. As if that weren't bad enough, I went ahead and married her while sh*tfaced in Vegas.

I know that I should get an annulment and forget the whole thing ever happened, despite the fact that our wedding night was the hottest thing I've ever experienced.

The last thing I should do is go back for seconds.

And what I definitely shouldn't do, is say f*ck the consequences and give this marriage a real shot.

But here's the problem with that: I'm pretty sure that Charlotte Harris is the one. And if that's the case, nothing is going to keep me away from her. Not even her brother.

DEALING WITH CHRISTMAS: A Holiday Story

Join the Dealing With Love crew as they celebrate Christmas the only way they know how: Lots of laughs, love, and an overflowing swear jar.