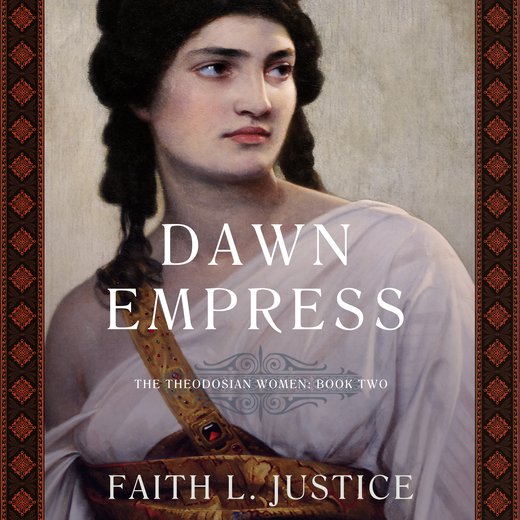 As Rome reels under barbarian assaults, a young girl must step up.

After the Emperor’s unexpected death, ambitious men eye the Eastern Roman throne occupied by seven-year-old Theodosius II. His older sister Pulcheria faces a stark choice: she must find allies and take control of the Eastern court or doom the imperial children to a life of obscurity—or worse! Beloved by the people and respected by the Church, Pulcheria forges her own path to power. Can her piety and steely will protect her brother from military assassins, heretic bishops, scheming eunuchs and—most insidious of all—a beautiful, intelligent bride? Or will she lose all in the trying?

Dawn Empress tells Pulcheria’s little-known and remarkable story. Her accomplishments rival those of Elizabeth I and Catherine the Great as she sets the stage for the dawn of the Byzantine Empire.

"A gripping tale…Justice chronicles, with a skillful blend of historical rigor and dramatic action, the extraordinary efforts of Pulcheria to outmaneuver her adversaries. The prose is razor sharp, and the tale is as impressively unsentimental as it is genuinely moving."—Kirkus Reviews

“The prose is beautiful, sprinkled with vivid descriptions…Dawn Empress is fast-paced and engaging, one of those novels that will keep fans of historical novels reading through the night.”—Readers’ Favorite (5-star review)