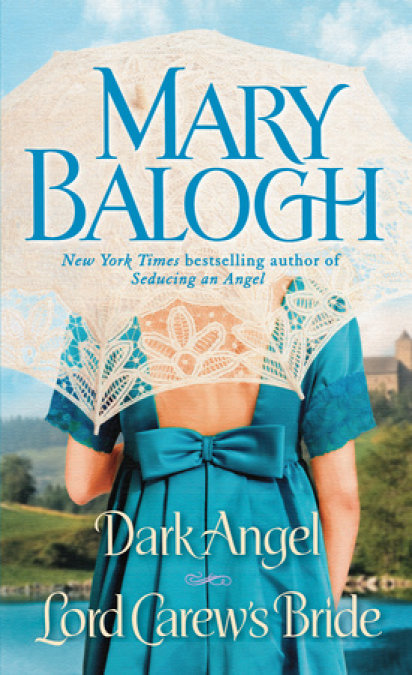 DARK ANGEL
Jennifer Winwood has been engaged for five years to a man she hardly knows but believes to be honorable and good: Lord Lionel Kersey. Suddenly, she becomes the quarry of London’s most notorious womanizer, Gabriel Fisher, the Earl of Thornhill. Jennifer has no idea that she is just a pawn in the long-simmering feud between these two headstrong, irresistible men—or that she will become a prize more valuable than revenge.

LORD CAREW’S BRIDE
Jennifer’s cousin Samantha Newman is smarting after she too is toyed with by Lord Kersey. In the midst of her heartbreak, she seeks solace from her new friend, the disabled gardener Hartley Wade. If only she knew that Hartley is secretly Lord Carew, and that he hides more than extraordinary wealth: a passionate secret held deep in his heart that only her love can reveal.


London was somewhat overwhelming to the two young ladies who entered it in an imposing traveling carriage late one April afternoon. Instead of talking and exclaiming over it as they might have been expected to do considering the fact that they had chattered almost without ceasing during the long journey from Gloucestershire, they gazed in wonder and awe through opposite windows as the crowded, shabby, sometimes squalid streets of the outskirts gradually gave place to the elegant splendor that was Mayfair.

“Oh,” one of them breathed on a sigh, breaking a long silence, “here we are at last, Jenny. At last! And suddenly I feel very small and very insignificant and very . . .” She sighed again.

“Frightened?” the other young lady suggested. She continued to gaze outward.

“Oh, Jenny,” Miss Samantha Newman said, turning her head from the window at last to look at her companion, “it is all very well for you to be so calm and complacent. You have Lord Kersey waiting here to sweep you off your feet. Imagine, if you will, what it must be like to have no one. What if every gentleman in town takes one look at me and grimaces in distaste? What if I am a total wallflower at my very first ball? What if . . .” She stopped in some indignation when the other young lady laughed merrily, and then she joined in reluctantly. “Well, it could happen, you know. It could!”

“And pigs might fly south for the winter,” the Honorable Miss Jennifer Winwood said quite unsympathetically. “One has only to remember how all the gentlemen at home tread all over each other’s toes in their haste to be first at your side at the local assemblies.”

Samantha wrinkled her nose and laughed again. “But this is London,” she said, “not the country.”

“And so the crushed-toe malady is about to spread to London,” Jennifer said, looking in affectionate envy, as she frequently did, at her cousin’s perfect beauty—short and shining blond curls, large blue eyes framed by long lashes darker than her hair, delicate porcelain complexion saved from even the remotest danger of insipidity by the natural blush of color in her cheeks. And Sam was small without being diminutive and well-shaped without being either voluptuous or its opposite. Jennifer often regretted her own more vivid—and less ladylike—self. Gentlemen admired her dark red hair, which she had never been able to bear to have cut even when short hair became fashionable, and her dark eyes and her long legs and generous figure. But she often had the uncomfortable notion that she looked more like an actress or courtesan—not that she had ever seen either—than a lady. She longed to look and be the perfect lady. And she never really craved gentlemen’s admiration.

Except Lord Kersey’s—Lionel’s. She had never spoken his name aloud to anyone, though she sometimes whispered it to herself, and in her heart and her dreams he was Lionel. He was going to be her husband. Soon. Before the Season was out. He was going to make his formal offer within the next few days or weeks and then after her presentation at court and her come-out ball their wedding was to be arranged. It was to be at St. George’s in Hanover Square. After that she would have to be presented at court all over again as a married lady.

Soon. Very soon now. It had been such a long wait. Five endless years.

“Oh, Jenny, this must be it.” The carriage had turned sharply into a large and elegant square and was slowing outside one of its mansions. “This must be Berkeley Square.”

They had indeed reached their destination. The double front doors were opened wide even as they watched and liveried servants spilled forth. Others jumped down from the baggage coach that had followed closely behind their traveling carriage throughout the journey. One of them lifted two maidservants down while the coachman himself was handling the young ladies down the steps of their carriage. It seemed a great deal of fuss and bustle for the arrival of two rather insignificant persons, Jennifer thought in some amusement. She had spent all her twenty years in the relative informality of country living.

But she was very willing to adapt. Soon she would be a married lady, the Viscountess Kersey, and would be lady of her own London home and country estate. It was a heady thought for someone who was only just now arriving in London for the first time. She was so very old to be doing that, so very old not to be officially out. But two years ago when she was eighteen and her come-out was planned and also the engagement and marriage that had been arranged three years before that by her papa and the Earl of Rushford, Viscount Kersey’s father, the viscount had been detained in the north of England by the severe illness of an uncle. Jennifer had shed many a tear that spring and summer, not so much at the lost Season as at the delay in her marriage. She had seen Lord Kersey so few times. And then last year disaster had struck again in the form of the death of her grandmother in January. There had been no question of either a Season or a wedding.

And so here she was, arriving in London for the first time at the advanced age of twenty. The only consolation was that her cousin Samantha, who had been living with them for four years, since the passing of her own parents, was now eighteen and able to come out at the same time as Jennifer. It would be good to have company and a confidante. And a bridesmaid at her wedding.

It had seemed an eternity, Jennifer thought, stopping a moment to gaze up at her father’s London house. She had not even seen Lord Kersey for over a year and even then only very briefly and formally in the presence of others at various Christmas parties and assemblies. She had dreamed of him every night since and had daydreamed about him every day. She had loved him passionately and singlemindedly for five years. Soon dreams would be reality.

Her father’s butler bowed to them with stiff deference from the doorway and conducted them to the library, where Jennifer’s father, Viscount Nordal, was awaiting them, standing formally before the desk, his hands clasped behind his back. He would, of course, have heard the commotion of their arrival, but it would have been out of character for Papa to have come out to meet them.

Samantha rushed toward him so that he was forced to bring his arms forward to hug her. “Uncle Gerald!” she exclaimed. “We have been speechless with the splendor of all we have seen. Have we not, Jenny? All we could do was peer out of the carriage windows and gawk with hanging jaws. Was it not so, Jenny? How lovely it is to see you again. Are you well?”

“I gather the speechlessness was not a permanent affliction,” he said with a rare sally into humor. He turned from her to hug his daughter. “Yes, quite well, I thank you, Samantha. It is a relief to know you have both arrived safely. I have been wondering if I should have come for you myself. It does not do for young ladies to travel alone.”

“Alone?” Samantha chuckled. “We had a veritable army with us, Uncle. Any highwayman would have taken one look and decided in despair that it would be certain suicide to risk an attack. A pity. I have always dreamed of being borne off by a handsome highwayman.” She laughed lightly to dispel her uncle’s frown.

“Well,” he said, looking closely at both of them, “you will do. You both look healthy and pretty enough. A trifle rustic, of course. I have a modiste coming here tomorrow morning. Agatha arranged it. She has come to stay and take charge of all the faradiddle of your presentations and the rest of it. You are to mind her. She will know what is what so that you are both suitably decked out for the Season and so that you will both know how to go on.”

“Well,” Lord Nordal said dismissively, “you will be tired after your journey, I daresay, and will be glad to rest for a while.”

“Aunt Agatha!” Samantha said a short while later as she and Jennifer were being conducted to their rooms by the housekeeper. “The dragon herself. I always have difficulty understanding how she and Mama could have been sisters. Will we have any enjoyment out of this Season, Jenny?”