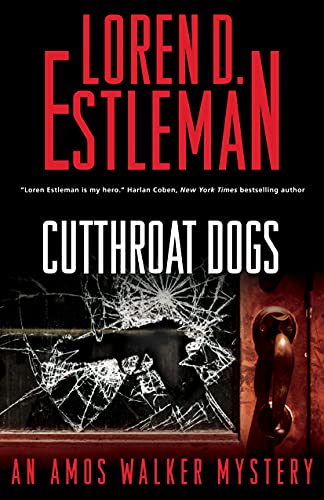 Cut-Throat Dogs is a new Amos Walker novel from a Grand Master. “Loren D. Estleman is my hero.”—Harlan Coben “Someone is dead who shouldn’t be, and the wrong man is in prison.” Nearly twenty years ago, college freshman April Goss was found dead in her bathtub, an apparent suicide, but suspicion soon fell on her boyfriend. Dan Corbeil was convicted of her murder and sent to prison. Case closed. Or is it? At the Publisher's request, this title is being sold without Digital Rights Management Software (DRM) applied.


I’d been arrested before, of course; in my line of work, having to make bail on occasion is a kind of business tax.

The department had worked innovations since the last time. A youngster who looked less like a cop than a pharmacist’s apprentice asked me politely to place my palms flat on a sheet of gray tempered glass. Something hummed and a beam of light swept the glass from side to side, recording my prints electronically and without ink.

I looked at my unstained fingers. “I’ll be damned.”

Officer Rexall had an infectious grin. “I know, right? Paid for itself the first month just in what we saved on Kleenex.”

I placed my free call in Receiving, with a cop standing by pretending not to eavesdrop; this one looked like a desk sergeant in a sitcom, blowfish-faced and bored half to death. For once Barry Stackpole answered on the second ring. He’d recognize the police number on caller ID. At this point in his odyssey through the techno-wilderness, he was hosting a podcast on the theme of organized crime and domestic terrorism. When I introduced myself, he asked what I’d been pinched for this time.

“Driving in the bus-only block on Woodward. They’re cracking down. You got any contacts left in print journalism?”

“One or two, if their livers are still functioning. Shouldn’t you be calling a lawyer?”

“What for? The cops already emptied my pockets. I want a reporter, a photographer, and Page One of the City section in the News and Free Press. You can’t buy this kind of advertising.”

What happened was this:

I’ve always had a laissez-faire attitude toward bank robbery. Now that the banks have laid off all the armed guards, eliminated teller’s cages, and order the employees not to offer resistance to criminals, what’s to stop you? Just send your gun and the note with your demands by way of the pneumatic tube in the drive-through and the cashier will send the money and return the weapon by the same route. Insurance covers the depositors. As long as you don’t intend to hurt anyone, why not rob a bank?

This character broke the rules.

It was in the downtown office of the Detroit Bank & Trust Building. I’d stopped trying to keep up with all the corporate aliases it had gone through since local tags went obsolete, so I still called it by its original name. It’s a lodestone of 1960s architecture: twenty-eight stories of tinted windows shaped like a box of shredded wheat.

It didn’t have anything to do with me, even if his hand came out of that case holding anything more lethal than the standard-issue note implying he was armed. Felons these days are getting to be bashful about brandishing weapons.

The game changed when his turn came and he leveled a Glock Nine at the pretty blonde behind the counter and shouted, “Gimme the cash, now!”

I don’t approve of people raising their voices in public, especially when they’re threatening someone with a gun. It’s redundant. I waited until the customers cleared from the line of fire, shouting and stumbling over one another, then slipped the Chief’s Special from my kidney holster and shot him in the leg.

I hit the bone that sticks out at the side of the knee. It’s the most painful place you can inflict an injury, and he hit the floor hard. His pistol sprang from his hand and scraped along the tile floor, spinning like a bottle. I made two long strides and kicked it into the far corner.

Alarms were clanging by this time, one in the bank, another in the nearest precinct house. The man I’d shot was still trying to rise, his gun hand clasping his bleeding leg, when the first siren ground down in front of the building and the uniforms came boiling in, pistols and riot guns raised. He was so pale now his wig and paste-on moustache stood out like the cheap Halloween costume it was. I just had time to let go of my .38 and throw up my hands before the cops tackled me. Of course I was the first one cuffed.

The blue-and-white they piled me into smelled like a urinal cake. It took a radio call from Dispatch and made a U-turn in the middle of Congress. I’d heard the instructions.

“Why the Second?” I said. “That’s Homicide. I just nicked his knee.”

The cop in the front passenger’s seat, light brown with dark freckles, told me to shut the fuck up.

Minutes later we swung into the small lot belonging to a low brick building that looked like a junior high school. Inside, a cross-section of the community sat in a row of orange plastic chairs, some bored, some fretful, like classroom cut-ups waiting to see the vice principal. The room was crowded with uniforms and hip guns. So far it still looked like school.

After I’d made my call to Barry, Sergeant Blowfish took me by the arm and led me in another unexpected direction. I’d hung around the Second Precinct often enough to know where the holding cells were. He took me down a different hall to a door I’d never been through, with an empty slot on the wall next to it where a nameplate was supposed to go. I knew the voice that answered his knock better than I knew my own.

My escort opened the door and gave me a gentle push. “Walker, Inspector.”

John Alderdyce sat behind a painted plywood desk reading a printed sheet. He shooed the sergeant on out and tipped a palm toward another orange plastic chair on my side of the desk. I took it and watched him take off his glasses. That brought out the jagged features of his Lego-built face. Whoever had assembled it hadn’t bothered with the finer details; he’d just stretched black skin over it and split.

“You know what the penalty is for carrying a handgun into a bank in the state of Michigan?”

“A five-thousand-dollar fine and a year in prison. When you get out, you won’t have an investigator’s license.”

“Are you sure you can yank it? Officially you’re retired from the department.”

“Starting slow, aren’t you? The pip-squeak who printed me could’ve done it.”

“You only got him because I had Dispatch re-route you to this precinct when I caught the squeal. You were on your way to Robbery Armed. Officially”—he stressed the word—“we could book you for intent to commit armed robbery on the evidence, and change the charge later; if we wanted to.”

“Until that Glock came out I forgot I had the damn thing on me. I just came off a security job and went in to deposit the check.”

“You forgot. Well, that changes everything.”

“You’re sarcastic, I can tell.”

I rolled a shoulder. “I’m pretty sure he was hopped up, the way he was yelling. A live cashier has to count for something.”

He glanced down at the sheet on the desk and signed it, leaning back to see what he was doing without putting his readers back on. Then he slid it into a letter tray. “Why do you think I stole you out from under Pollard at R/A? He sleeps with a copy of the department manual under his pillow and he’s got a hard-on against rental heat. That sheriff’s star you carry would be an extra piece of candy in his piñata. It’s a clear violation.”

“I’d junk it, only it opens some doors.”

“Personally I’d rather live with the case of hives I get knowing you’re walking around flipping off the law than risk an uptick in the homicide rate; but I’m getting to be in the minority. We’re in the showcase-bust business now: Sweep ’em in the front door, sweep ’em out the back. I’m jeopardizing my brand-new job first step out of the gate. You never know what side of the bed this chief woke up on today. I’m thinking of hedging my bet: Tank you on the weapons beef and put in a word with the county prosecutor, get you probation as a first offender. Then again, you never know what side she got up on.”

“It seems to be a contagious condition.”

“Nuh-uh. I had a good mood going until about an hour ago.”

Voices clamored outside the door. A vein throbbed in my temple. Only one segment of the population argued with authority in quite that tone.

“Jesus!” Alderdyce’s perpetual scowl spread to his hairline. “The press in this town can smell a byline like a bitch in heat. How the hell did they know we brought you here?”

I hoped the question was rhetorical. That spur-of-the-moment idea I’d had was beginning to look less like a stroke of genius and more like just a stroke. The Tuesday night special at County was a Band-Aid on a cracker.

Still glowering, he picked up his glasses, tapped a corner on the desk a few times, then dropped them again. He slid open a drawer, took out my wallet, ID folder containing the illegal county shield, keys, and the Smith & Wesson in its belt clip, and placed them on my side of the desk.

“Just make sure you tell them how fast we responded.”

“Made me proud of my city.” I put everything away and fled the scene.