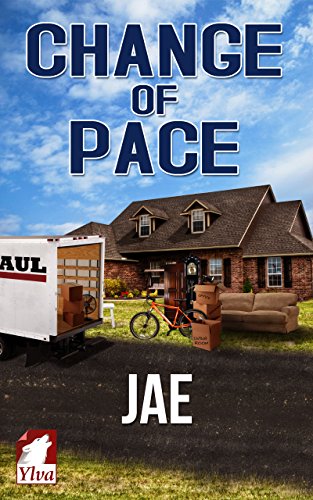 Sophie Matheson, Kade’s homophobic mother, is coming to Portland for a visit. Her timing couldn’t be worse. Not only is Kade newly in love with a woman, but she also promised to help her friends Aiden and Dawn move in together.

Instead of going to art museums and having lunch in an expensive restaurant, Sophie will now help U-Haul a lesbian couple. Kade tries to tell herself it’s going to be a nice change of pace, but she knows better.
Read more

“Of all the times to hold a motion hearing, she had to choose today!” Kade closed her office door with more vigor than necessary and strode to her desk. She put down her briefcase and sank into her chair to slip out of her high-heeled pumps for a moment.

A knock on the door made her jump and hit her knee on the edge of the desk. “Yes?”

“Del!” Kade rubbed her knee and looked at her with raised eyebrows. “What are you doing here?”

“I had to drop off a file for Stacy Ford and thought I’d pay my favorite DDA a visit.” Del grinned at her.

Kade found that smile irresistible, but even that wasn’t enough to improve her mood by much. “I’ve had enough surprises for today, thank you very much,” she grumbled.

Del walked over and bent to kiss her.

Heat shot through Kade, partly a physical reaction to their intimate contact, partly nervousness about this display of affection in her office. After allowing herself to enjoy the kiss for a moment, she pressed her hand against Del’s shoulder, gently pushing her back. “Not here. Not now.” She squeezed Del’s shoulder before settling back down behind her desk.

Del sat across from her without comment. She always respected Kade’s boundaries. “So what’s going on? Your day not going well?”

“It was—until Judge Linehan decided to have a last-minute motion hearing this afternoon,” Kade said.

Del canted her head. “Why’s that a problem? You usually love motion hearings.”

Even after dating her for two months, Kade was still surprised by how well Del had gotten to know her. “I do. But I had a call from my mother this morning. She decided to visit a week earlier than planned. I promised to pick her up at the airport this afternoon, but now I’ll be stuck in a hearing.”

“Then let another deputy DA handle it,” Del said.

“Beth Lawrence could probably take over, but she doesn’t have a lot of experience.” Kade sighed.

Del gave her an affectionate smile. “Control freak.” She managed to make it sound like an endearment, so Kade let her get away with it. “If you want to handle the motion hearing yourself, call your mother and tell her to take a cab,” Del said. “By the time she makes it downtown, the hearing will be over, and you can take her to dinner.”

“What about a car service? I’ve heard they have very nice limos. Maybe that’d be more her style?”

Kade would have gladly paid for the car service, but her mother wouldn’t like that either. “It’s not about the car. My mother told me in no uncertain terms that she doesn’t want to deal with a stranger picking her up.”

“What about your brother?” Del asked. “Can’t he pick her up?”

That had been Kade’s first thought. “No. He has back-to-back surgeries all day.”

Kade stared at her. “You want to pick up my mother from the airport?”

“Sure.” Del smiled bravely. “We met when we stayed in Ashland, so I’m not a stranger.”

A chuckle escaped Kade. “You more than met. You got your butt handed to you in a tennis match. And our visit didn’t end so well when she caught us kissing. Are you really sure you want to volunteer to be alone with my mother for up to forty-five minutes, in a small, closed space, during rush hour, with no way of escaping?”

“Really?” Kade was caught between relief and guilt.

“Really,” Del said. “Call me on my cell when you get out of the hearing, and I promise to keep your mother entertained until then.”

Kade wrote down the details of her mother’s flight. She picked up the note but hesitated to hand it over. “You’re sure you don’t mind?”

“You know I like doing little favors for my girlfriend.” Del plucked the note out of her fingers.

“Oh, you really enjoy calling me that, don’t you?” Kade wagged her finger at Del, but she actually didn’t mind—and she was sure Del knew it.

Del grinned unrepentantly. “Yep. I sure do. So, should I drop off your mother’s baggage at your apartment, or where is she staying?”

“No, she’s staying at a hotel, thank God!” Kade had been relieved when her mother told her that she had already made reservations.

Del glanced at her watch. “Sorry. If I want to leave early to pick up my future mother-in-law, I have to go now and get started on my to-do list.”

“You better not call her that to her face,” Kade said. She knew Del was only teasing. They were taking it slowly and were nowhere near the level of commitment that would make Sophie Del’s mother-in-law.

When Del strode to the door, Kade enjoyed the confident gait and the play of lithe muscles under the black slacks. An unexpected wave of emotion rushed over her. “Del?” she called.

“Yeah?” Del turned back around and looked at her expectantly.

Kade bit her lip. “Um…thank you.” It wasn’t what she had wanted to say, but since she couldn’t find the words, it would have to do.

Del smiled—not the polite smile that Kade saw all day from assistants, defense lawyers, and acquaintances, but an affectionate grin that lit up Del’s face and made her dark eyes sparkle. “You’re welcome,” Del said warmly. With another smile, she turned back around and reached the door in two more steps.

“Del!” Kade called at the very last moment before Del could open the door and leave.

“Not without this.” Kade hurried around her desk and wrapped her arms around Del, pressing their bodies together as she gave her a quick kiss.

“Mm-hm.” Del hummed in appreciation as the kiss ended and Kade stepped back. “I thought you said no hanky-panky in the office.”

Kade tried to look indignant but couldn’t pull it off. “I couldn’t let you go without a thank-you for picking up my mother.”

“If that’s how you thank me for spending time with your mother, she might become my new best friend,” Del said.

A knock on the door made them jump apart. Del moved away from the door as Kade reached to open it.

“See you later,” Del said and stepped past Kade’s assistant into the hallway.