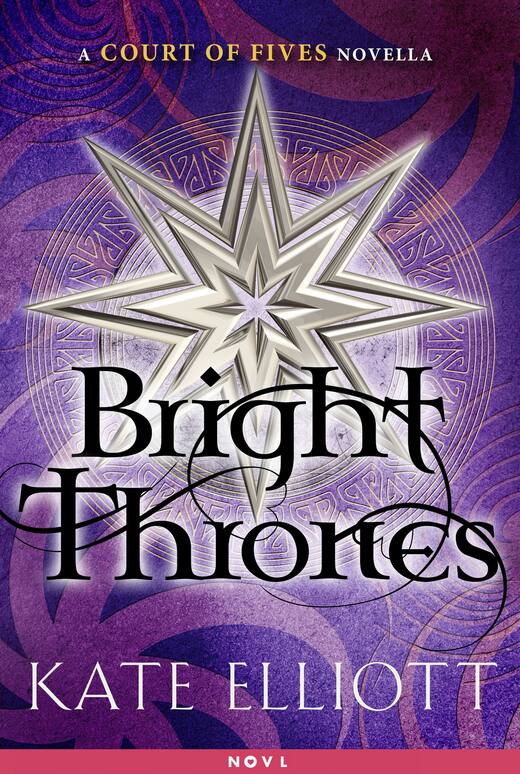 From World Fantasy Award finalist Kate Elliott comes a thrilling companion novella that links Poisoned Blade and Buried Heart, the final two books in the enthralling Court of Fives series. Bettany has always been an outsider in her family: the angry one, the wild one, the daughter who refused to accept the dominance of her Patron father's people over her Commoner mother. When her family is torn apart by a vengeful lord, Bettany makes a dangerous choice to accompany their household servants being transported to the mines, hoping she can keep them from suffering a fate worse than death. Their only chance lies with a stuffy foreign doctor who may be able to help them escape, but can Bettany trust him? Her instincts tell her there is much more to this man than meets the eye. Read the untold story of what happened to Jessamy's missing twin sister in this beautifully written companion novella to the New York Times bestselling Court of Fives!

He woke in a sweat, sat bolt upright in the darkness, and reached for his sister’s hand.

He felt around; her cot was gone. She was gone. This place smelled wrong; it stank of heat and stone and sand, not the fresh sea breeze and herb-soaked scents of the comfortable kitchen where his mother cooked and younger brother meticulously prepared plants for medicinal use.

The voice continued, someone speaking not in a dream but nearby. “No need for Lord Agalar to examine this one. Send the prisoner directly to shaft five with the other murderers.”

The mention of Lord Agalar jolted him into action. He swung his legs over the edge of the cot on which he’d been sleeping. He expected to touch worn floorboards or dusty stone but instead his feet sank into a soft carpet. The touch of luxury cleared his muzzy thoughts. He remembered in vivid, taste-soaked detail: a slice of lemon stings on his tongue to distract himself as he applies the exact amount of pressure it takes to cut open a larynx with a scalpel.

His limbs went clammy, his chest constricted, and a wave of dizziness caught him by surprise because he was sitting still, not cutting a man open, not fleeing with his sister on that blood-drenched day over a year ago. For several breaths he sat with face cradled in his hands as he had trained himself: slow inhalation, hold, slow exhalation.

When his pounding heart calmed and his hands were no longer shaking, he groped along the table placed beside the cot and found a basin, his shaving kit, and finally the oil lamp he was searching for. After lighting the lamp and getting dressed, he ventured past the folding screen that concealed the cot.

The large chamber beyond the screen was also hot and dark. It stank of blood, although the floor had been mopped last night and all the basins scrubbed with sand before being replaced beside the surgery table. A mirror caught the lamp flame and showed him a ghost of himself, like a reminder of who he once had been, years ago, his earliest memory: a young child standing terrified in the dark.

“Lord Agalar?” A man spoke from the other side of an outer wall concealed by floor-to-ceiling curtains.

The face that looked at him from the mirror had no voice, so he set down the lamp and thus banished the ghost. To save his sister and mother and younger brother, he had to shed the murky past. In diction, tone, mannerism, and conceit he had to become Lord Agalar of Nerash, a man utterly sure of his exalted place in the world, of his expertise, of how cumbersome it was to be surrounded by people less important than himself.

“Who has interrupted my morning routine? Where is my tea? Why are the curtains not open?”

The curtains were drawn aside by an armed guard. The space opened directly onto a covered porch supported by stone pillars. Agalar shaded his face as sunlight assaulted his night-adapted eyes.

Beyond the porch lay the mining settlement, a village nestled beneath the rocky slopes where the mining shafts cut into the ground. The mudbrick houses for the supervisor and visiting notables clustered off to the right. There was also a stable, a barracks for guards and free laborers, and a cookhouse built of quarried stone. Judging by the angle and length of shadows, he had slept to midmorning. Usually he rose at dawn, the only time of day to enjoy this blighted landscape. By now it was already uncomfortable.

Pearl entered bearing a tray with a pot of tea and a platter of freshly baked bread, peeled figs, and slices of melon. She examined him with a frown that reminded him of his mother.

“I can see you didn’t sleep well.” She set down the tray and without asking, straightened his clothes so he would look less like he’d tossed them on the carpet before going to sleep, which he had in fact done. Only after she tidied him up to her satisfaction did she gesture to the armed men who waited on the porch outside. He called the two guards Sunny and Flint because it irritated them, and they had to put up with it to keep up the pretense that he was really the esteemed Lord Agalar of Nerash, a rich and highborn physician traveling the world in pursuit of medical knowledge.

“Lord Eorgas requests an audience, my lord.” Sunny had the most cheerful of voices but in fact was a nasty man with not the tiniest gleam of light in his foul spirit. “A new lot of prisoners needs inspection for the mines because they may be ill.”

Lord Eorgas peered nervously into the chamber from the edge of the porch. The mine supervisor was a man whose skin was baked brown and leathery by a lifetime living under the unforgiving sun of the desert. Like most of the other upper-class Saroese men in the land called Efea, Eorgas kept his black hair shaved close against his head to keep it lice-free and his scalp clean.

Agalar stiffened his back and gave that confident twist to his voice that so impressed people who bent over backward to please any man titled “Lord.”

“Ah! Eorgas. Do join me. Pearl, do hurry up Ash with my wash water. I can’t eat before I’ve washed.”

She went out as Eorgas ventured in. Dust darkened the mining supervisor’s clothing but at least his face was clean.

“Blessings of the morning to you, Lord Agalar. I’m sorry to wake you so soon after all the work you did last night, and for nothing.”

“It’s never for nothing to make the attempt to save a life. I regret that my efforts were not enough to save the man. But perhaps the next patient will benefit from his death because your shift supervisors have learned how to properly tie off an injured limb with a tourniquet. Ah, Ash.”

Unlike Sunny and Flint, who had been hired separately to keep Agalar under observation, Ash and the rest of Pearl’s crew of thieves were the sort of people you could trust as long as they weren’t trying to steal from you. So Agalar felt safe enough to sit down and close his eyes without fearing he’d get spit on or hit. He wasn’t sure he would ever get used to the opulence of sitting passively as another person soothed the dry skin of his face with a hot, moist towel scented with rose water, then thoroughly washed his hands for him in lemon-scented coconut oil.

“This astounding heat sucks vitality as well as water from the body,” remarked Agalar to Eorgas. “And the ever-present film of dust is quite astonishing. I fear my surgery tools will never be properly clean while I am in residence here.”

“You waste a great deal of water. Your demands are taxing our well.”

“Clean wounds and clean surroundings lead to much improved chances for healing. Now, Eorgas, what brings you so urgently to my office this early in the morning?”

As the man began to ponderously explain about a newly arrived group of prisoners needing examination, Agalar’s attention drifted to two ragged figures standing in the full glare of the morning sun. One was a boy of perhaps twelve; he had the brown-black complexion common among the Efeans whose people had always lived in this region. Men like Eorgas called themselves Efean too, but their black hair was straight instead of tightly curled, and their skin was lighter, marking them as descendants of the Saroese who had sailed to Efea five generations ago.

The exhausted slump of the boy’s thin shoulders triggered a twinge of clotted memory.

A young child standing terrified in the dark in a field overrun with fighting.

He forcibly suppressed the memory by shifting his gaze to the creature standing beside the boy. It was a frightful thing draped in a baggy shift that had been enthusiastically smeared with a dried substance he hoped was not feces, but considering its matted hair and dust-blotched skin, he wouldn’t have been surprised. Still, a kind of feral intelligence shone in its dark eyes. It noticed him looking and, after a glare as staggering as a knife stabbed into his face, looked angrily at the ground.

“Bring those two in under the shade,” he said, interrupting Eorgas without compunction. “I wouldn’t leave a rabid dog out in this sun.”

“They might be carrying the fire curse. It will infest the whole mine if we’re not careful.”

“The fire curse! I don’t know this disease.”

“It’s a burning rash that eats into your skin until it weeps blood. Men in particular dread it because it often infests their tender areas in a most unpleasant way. They call it a curse because it’s said only magic can heal it.”

“Magic! We shall see about that.” Agalar walked out to the porch only to be stopped dead by the astounding stink. “Whew! I would recommend a bath for this beauty, Eorgas, but dare not risk your complaining about the waste of water. So which will it be? Endure the stench when I bring them into my surgery to examine the rash, or wash them first?”

“We do not need a wash. We are fine as we are.” The voice was low, scarcely more than a whisper. It startled him in its intensity and in the precise, educated diction of its Saroese, since he’d discovered most of the native Efeans either did not speak Saro. . .