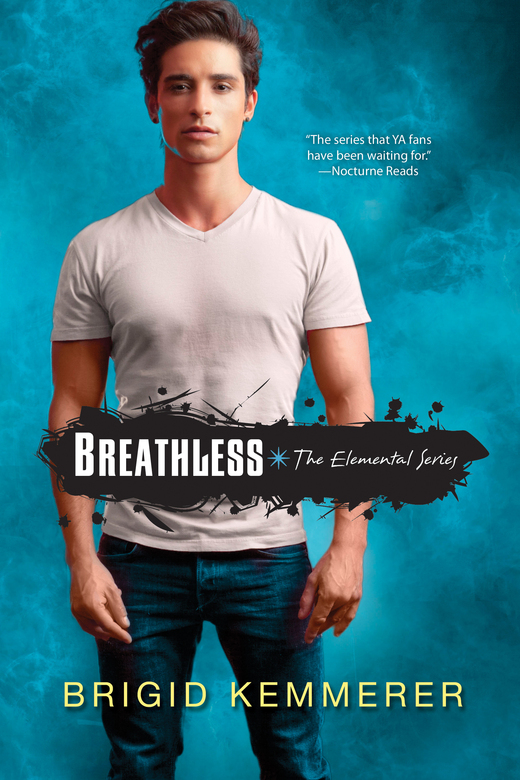 "The series that YA fans have been waiting for." -- Nocturne Reads Too many secrets. Not enough time. Nick Merrick is supposed to be the level-headed one. The peacemaker. Since it's just him and his three hotheaded brothers against the world, that's a survival tactic. But now he's got problems even his brothers can't help him survive. His so-called girlfriend, Quinn, is going quick as mercury from daring to crazy. Meanwhile, Quinn's dancer friend Adam is throwing Nick off balance, forcing him to recognize a truth he'd rather shove back into the dark. He can feel it--the atmosphere is sizzling. Danger is on the way. But whatever happens next, Nick is starting to find out--sometimes nothing you do can keep the peace. Praise for Brigid Kemmerer and The Elemental Series "Magic, suspense, and enough twists to keep you reading until sunrise. An incredible start to the series!" --Award winning author Erica O'Rourke "A refreshingly human paranormal romance. . . Read fast and keep that heart rate up." -- Kirkus Reviews on Storm 14,598 Words

Nick Merrick sat on his bed and ran his thumb along the edge of the sealed envelope.

He didn’t want to open it.

He probably didn’t need to. It was thin, and thin letters from universities typically meant one thing: rejection.

It wasn’t his first-choice school anyway. He’d applied at University of Maryland because they had a solid physics program and it was an in-state school. If they rejected him, he didn’t really care.

He’d thought applying early at a few local schools would be a safe bet, just to get himself into the rhythm of it, seeing what kind of feedback he’d get.

Apparently it meant he’d get used to rejection right off the bat.

The worst part was the twinge of guilt in his stomach.

Not because he might have to go out of state.

The guilt was because he wanted to. Sort of.

A new town would mean anonymity. No one would know about his powers.

No one would know him as Gabriel Merrick’s twin brother, half of a unit.

A new town meant he could just be Nick.

Whatever that meant. Sometimes he worried that he’d get his wish, that he’d end up in some strange town, surrounded by new people, and he’d realize that there was nothing there, that his entire being was based on his brothers’ expectations of him.

Well, it wasn’t like he didn’t have options. A local school would have meant he could still stay home and help Michael with the business. If he couldn’t go to Maryland, he could go to the community college down the road. Nothing wrong with that.

Except . . . he didn’t want to go to the community college.

The colored balls in the Galileo thermometer on his desk started to shift, and Nick glanced up. He was changing the temperature. His blinds rattled against the window frame, too, as a gusty breeze tore through his room.

This was stupid. He should just open the envelope.

If only his powers gave him X-ray vision.

Not like he really needed it. He could imagine how the letter would begin.

Dear Nicholas, We regret to inform you that you’re a selfish bastard—

Yeah, right. Nick swore and shoved the letter between two textbooks on the desk. He could read it later.

Michael had asked him to reconcile a stack of invoices anyway. Better to let numbers steal his attention, especially since his oldest brother would be pissed if he got home and found a stack of paperwork still waiting for him.

The kitchen was empty, but he’d passed his youngest brother in the living room, along with his girlfriend. Chris and Becca were watching a movie, but from the glimpse Nick had gotten, there wasn’t a whole lot of watching going on. Not like Nick needed a glimpse: the air was more than happy to whisper about their activities.

Gabriel was out, doing something with Layne, and Michael would be on a job for another hour, at least.

Nick tore into a foil package of Pop-Tarts and fired up the laptop. With a toaster pastry between his teeth, he began to sort through the pile of carbon credit card slips, invoices, and canceled checks.

Michael was great about documenting what he was doing and how much it cost.

He wasn’t so great about making sure he was actually paid for it.

Nick had been doing most of the bookkeeping since he was thirteen. Now he could do it in his sleep.

His brain kept drifting to that letter, sandwiched between those textbooks on his desk.

At least he’d been the one to get the mail today, so no one else knew. God, that would have been a disaster. Hell, Gabriel probably would have put him in a headlock until he tore the envelope open.

Gabriel wouldn’t be upset. He didn’t want his twin to go.

That was another big part of the guilt.

He caught himself entering line items twice, and he pulled his hands off the keys to rub at his eyes. School was closed this week, thanks to the recent fire in the library, but he should probably be using the extra time to study. There was no money for college, so grades were everything right now.

His cell phone buzzed against the. . .