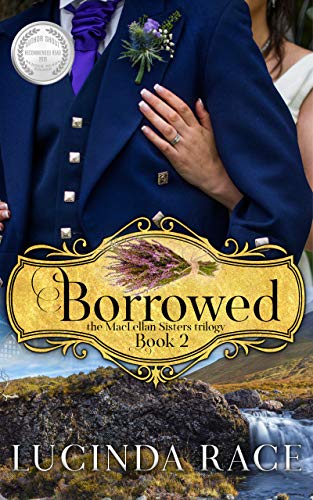 When three single sisters inherit their Scottish great-grandmother's wedding dress, they also inherit the legend that comes with it: put on the dress, look in a mirror, and reveal their future. The dress is more than just silk and lace, for magic has been stitched into the seams of the heirloom. For the MacLellan sisters, the enchanted wedding dress promises a legacy of everlasting love.

He's just a borrowed boyfriend. He might also be her true love.

Gym owner Kenzie MacLellan has always been the most independent of her sisters. Spunky and self-reliant, she vowed to stay single, just like them. But when her newly married sister passes their grandmother's enchanted wedding dress to Kenzie, she can't resist trying it on. What she sees when she looks in the mirror shakes her to her core. Robbie Burns? Childhood buddy, best friend, occasional borrowed boyfriend? That's the future the dress predicts for her?

Robbie Burns has tried for years to pry Kenzie from his heart. She'd never see him as more than her manager at the gym, her camping pal, the guy she borrowed when she needed a date for dinner or the movies. That hasn't stopped him from being in love with her. But on their annual hiking trip in the White Mountains, Kenzie tumbles. Just not in the way either of them planned.

For the first time in her life, an injured Kenzie is forced to lean on someone else for a change. Robbie's tender care for her, and her growing attraction to him, is setting off all her alarm bells. Robbie would never a change a thing about her, but is Kenzie willing to risk it? Has a borrowed wedding dress really revealed Kenzie's borrowed boyfriend might be the love of her life?