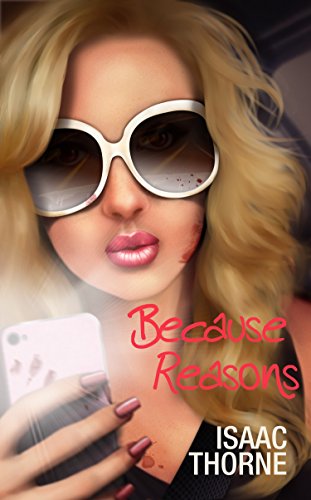 Tiffany is an above average girl, an all-American dream. Her mother is a successful lawyer. Her father is CEO of two different tech startups. Her social skills are exemplary. Her mind is sharp. Her instincts? Killer.

But Tiffany has a problem. She's bored. So bored. She has no idea what she's going to do with her life. That is, until the night her mother dies right before her eyes.

That night Tiffany decides she's going to go out and have some real fun. Some blood-soaked fun. Because fun is powerful and power is legit.

Because being bored is worse than being dead.

BECAUSE REASONS is a short tale of dark comic horror from the mind of Isaac Thorne, a nice man who simply wants to provide you with a few fun frights. Most young people attempt to find themselves by changing college majors or working a variety of jobs, but Tiffany is not most young people. BECAUSE REASONS follows her on her murderous romp down a lonely desert highway, perhaps to her own destiny.