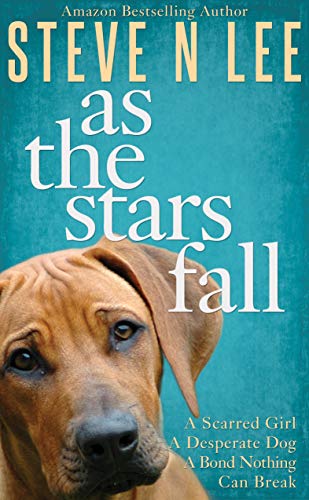 A Desperate Dog. A Scarred Girl. A Bond Nothing Can Break.

★★★★★ “Emotional, heart-wrenching and heartwarming. I was lost in this story from the very beginning. It's beautifully written and will stay with me for a long long time.” Curled Up With A Good Book (book blog)

An injured, young dog trudges the city streets, trembling from cold, from fear, from lack of food. Battered by the howling wind, he searches desperately for his lost family, yet day after day, week after week, all he ever finds is heartbreaking loneliness. But then, one magical spring morning...

Across town, a little girl sobs into her pillow in the dead of night. Her life devastated by a family tragedy, she can't understand how the world can just carry on. Her days once overflowed with childhood joys, yet now, despair, darkness, and emptiness smother her like a shroud. But then, one magical spring morning...

In a tale as heartwarming as it is heartbreaking, As The Stars Fall explores how compassion can make us whole again and friendship can heal even the most broken of hearts.

★★★★★ “A great story with a beautiful, heartwarming ending.” Tom Kiker, Amazon
★★★★★ “Thought provoking and well written. [I] loved it so much I've bought 2 paperbacks to give as Christmas presents! It'll break your heart and rebuild it again.” C. Johnson, Amazon
★★★★★ “A story that is equal parts intense beauty and heart wrenching agony... I know I'll still think of this story years down the road.” Insatiable Readers book blog
★★★★★ “A heartwarming, touching, and poignant novel about the love between a dog and a young girl.” Paula, Amazon
★★★★★ “A perfect book for dog lovers. It is a story of courage, determination and love.” Library Lady, Amazon
★★★★★ “I almost laughed myself into an asthma attack during certain scenes and cried at the end of this book, all the while wondering if this is how my own dog perceives me.” Kathy Banfield, Goodreads
★★★★★ “[I] highly recommend it especially if you like books like Marley and Me, The Art of Racing in the Rain, and similar stories.” Storeybook Reviews book blog

Special Edition
With this special edition, you get: As The Stars Fall is an Amazon Bestseller (Sep 2020) ★★★★★ “Loved this book from beginning to end. Had smiles, tears and everything in between. Fabulous writing and the characters and dog came to life as I read.” genie, Amazon

If you love dogs, you need to read As The Stars Fall right now.

Dribs and drabs of people meandered from a green fast-food truck with a giant glowing hot dog hanging over the serving hatch farther down the street. Dog had found food in this area a number of times before, so was today going to be another lucky day?
The scent of succulent cooking pork wafted over: sausages, burgers, hot dogs. Saliva pooled in Dog’s mouth. He passed the truck every day, and the smell always drove him nuts. Not just because it was so heavenly, but because he dreamed of how the warm, fresh meat would taste compared to the occasional cold, decaying scraps he found nearby.
Unfortunately, no matter how many times he dreamed of a fresh hot dog, that was all it was — a dream.
Once, Dog had found the truck’s back door open, so he’d ventured inside. Big mistake. A man in a white apron had screamed and kicked him so hard his ribs hurt for a week, so he’d never tried again and had given up all hope of ever tasting a fresh hot dog. Like anyone was ever going to take someone like him to such a place for a hot meal.
Though his paws ached from tramping the streets since dawn, he quickened his pace, the thought of food — real food, not dream food — powering his weary legs.
A young man and woman strode toward him hunched under an umbrella together. Walking arm in arm, each stared down at a small flat black board in their free hand on which they tapped with their thumb. Too distracted by whatever was on their boards, they didn’t see him but marched on as if he wasn’t there.
Dog jerked sideways to avoid being trampled, then hugged a building’s wall to avoid people as much as possible.
He scampered along, the giant hot dog glowing brighter and brighter as the scent grew stronger and stronger.
He couldn’t get too close to the truck because, following the kicking incident, the aproned man always shooed him away, yet he didn’t have to get close because this smell wasn’t a hot, fresh smell. No, it was different. Old and cold, it meant only one thing — the food had been dumped because it was unwanted. Unwanted by anyone except him.
It really was his lucky day. At last, all the bad times were going to balance out with good times.
Dog drooled.
Forgetting about the food truck and what he could see, he focused on what he could smell and allowed his nose to guide him past the vehicle.
Ahead on the left, the mouth of a dark alley loomed. He stepped away from the wall toward the middle of the sidewalk, putting some space between him and it as he approached. Except for his own, he didn’t like alleys. Too many bad things had happened in them.
As he got closer, he slowed to a shuffle. Sniffing the air, he shuddered. Maybe his nose was wrong this time. Maybe he wasn’t just hungry but sick, so his nose was misleading him. Or maybe the bird attack had hurt him so his nose was off its game. Whatever it was, this time, his nose was wrong. It had to be.
Creeping along the curb to stay as far away as possible from the alley, he tensed and dared to peer into the shadow-strewn depths. He didn’t want to go in there. He was not going in there.
However, now so close to the entrance, his nose confirmed his deepest fear — the food he so desperately needed was hiding down in the darkness.
But that wasn’t his biggest problem.

Dog hobbled along the sidewalk, holding his left forepaw off the ground. He winced as his right landed on the ground, the impact sending shockwaves through his body, jarring his injuries.
The streetlights cast an eerie yellow light over the dark buildings that walled him in. He never liked to be on the streets this late, but it was taking him longer than normal to struggle back after his encounter with Hound.
He strained to pry his right eye open to better watch for dangers, yet he could manage only a squint through the stinging pain.
Shivering, he gasped for air as he composed himself before pushing himself to take another step. After a few seconds, he lurched forward again, and again he winced at the sharp pain that drove through his body like a stake.
With every step he took, the night sky seemed to sink lower, closing in around him, as if trying to smother him. Its blackness seeped into his body, draining every last drop of his strength and hope as it fought to squash him into the sidewalk, to leave nothing but a stain the rain would wash away.
His legs gave way and he slumped against a brick wall. Though his chest heaved, there wasn’t enough air in the entire world to give him the strength to carry on to his alley.
This was it. The end.
He slid partway down the wall, the dark, damp ground seeming so welcoming.
His mother flashed into his mind.
Dog gritted his teeth. A good dog never abandoned its pack. What if she came back and he wasn’t there waiting for her?
He pushed to stand once more, yelping as pain stabbed his shoulder.
Panting with the effort, he lumbered another step, battling his way along the sidewalk as clouds skittered across the moon. Finally, he turned a corner, and there, only feet away, was a moldy old box lying on its side.
Home.
Swaying, Dog had to focus to stop himself from toppling over with the relief.
The sight of the filthy box energized his beaten body. He staggered toward it as fast as he could and collapsed inside. He was home. Home!
He hadn’t eaten today. Again. Neither had he found a message from his mother or any of his brothers. Again. As if that wasn’t bad enough, now he could barely walk.
Every day was nothing but struggle — struggle for food, struggle for warmth, struggle for companionship. And every day was disappointment. Every day. There was no such thing as balance. No win one day, lose the next. It was all lose, lose, lose. Was that really all there was to life? There had to be more than an endless struggle. Surely.
Dog gazed up at the blackness still straining to smother him, now so close he could all but bite it.
There had to be something. Anything. But what?
He stared up at the pinpricks of white set in the darkest of heavens. What were they? So many tiny lights in a wilderness of black, it was almost as if they were lights left on to guide lost loved ones home.
Dog didn’t have a light to guide anyone to him. He whimpered.
Starving, cold, and so alone, he did the only thing a dog could do — he howled. He prayed his mother or his brothers might hear, because if they did, he could guide them home and they’d be a family again. A proper pack.
While the night grew blacker and colder, he howled. And howled. And howled.
And waited. And waited. And waited…