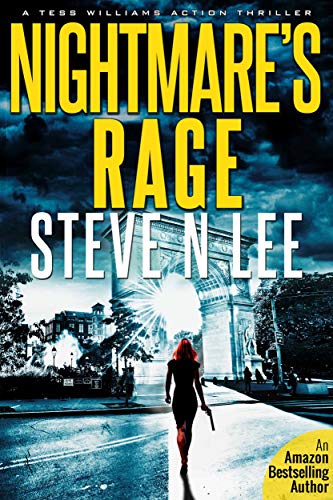 A serial killer. A mob boss. A vengeance-fueled battle to the death.

Killers aren't born, they're made. Seventeen years ago, a savage murder ripped Tess Williams's world apart. Today, she finally gets a lead on the killer, so after seventeen long, torturous years, she's out to meet her maker. All guns blazing.

Unfortunately, that monster is now a feared crime boss, surrounded by brutal gangsters, hired thugs, and ruthless assassins. If Tess is to reach him, she must go through all of them. But how?

Outnumbered and outgunned, Tess knows this will be the job that puts her in the ground, however, she doesn't care as long as she nails her target first. Not a problem, if she had a small army. But alone?

And just when she thinks things can't get any worse, the killer discovers she's tracking him – the hunter becomes the hunted.

Today, Tess's violent story will come to an electrifying end. But whose end will it be?

★★★★★ “This was a roller coaster of a read... I Could Not Put it Down” Hillel Kaminsky
★★★★★ “Wow! An explosive installment... A great read with real insight and wisdom from a strong and very likeable protagonist” Julie Elizabeth Powell
★★★★★ “Talk about a nail-biting ending! Whew, I was exhausted by the time I had raced through this one.” Jan Simmons
★★★★★ “A breath-taking thrill ride. Don't start this one until you have time to read it through to the end because you won't want to put it down.” Mouse
★★★★★ “Steve Lee has created the perfect storm: action - strong characters - and well developed storylines. I try to read slowly because by the last page I do NOT want this book to end.” Sheryl Painter
★★★★★ Over 700 5-star reviews across the series! ★★★★★

If you love a troubled hero with a dark past, love pulse-pounding action and electrifying suspense, you MUST READ this series.

You get Black File 07 free with this book (see the Table of Contents for details).

Can I read the series in any order?

Nightmare's Rage (book 07) and Shanghai Fury (book 08) are best read after books 01-06 because small subplots that span the series come together in these books, but this isn't vital - each is a thrilling story in its own right.

This series is gritty, action-packed crime fiction, not Miss Marple, so expect some violence, occasional strong language, and every so often, a scene of a sexual nature.

The paperback is 200 pages long.