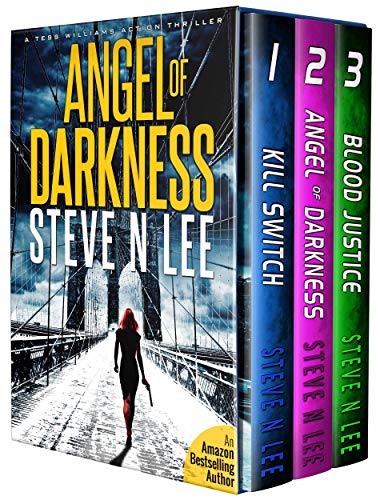 Vengeance is a woman. She never forgets. Never forgives. And never fails to get even.

Rogue assassin Tess Williams preys on killers, pimps, gangbangers, rapists... the monsters that ruin lives. Haunted by a tragic past, Tess will risk everything to protect the innocent and avenge the dead.

In Krakow, Poland, the disappearance of a young woman thrusts Tess into an impromptu investigation. Before she knows it, she's plunged into a life-or-death battle with an international gang of people traffickers.

With the clock ticking, Tess races to save the woman before all trace of her disappears forever. And that's when the body count starts to rise.

Outnumbered, outgunned, and out of options, Tess discovers that victory sometimes comes at a price too terrifying to pay.

A crazed sniper blasts another innocent bystander from a rooftop, proclaiming on social media that he's on a mission from God. Tess had hoped the police would nail this psycho, but a shocking revelation thrusts her into a full-throttle investigation to bury him herself.

Tess clashes with street thugs, white supremacists, and gun smugglers, but just when she thinks she's got a lead, disaster strikes.

Out of time and out of hope, Tess must face a terrible possibility — she can't stop the killer. But can she save the next victim?

When a loving father is murdered in a botched car theft, Tess leaps in to nail the killer at any cost. But with no clues, no witnesses, and no evidence, how can she?

Tess plunges into the perilous underworld of chop shop thugs, car thieves, and mob bosses, yet no matter how hard she fights, she uncovers nothing but hints of a dark secret that lurks at the heart of the murder.

Then a startling discovery stops her dead...

One man holds the key. A man even Tess can't challenge.

Will the killer escape justice or can Tess sacrifice everything she believes in to bury the cold-blooded monster?

Reviews for the books in this set:

★★★★★ “Fast-paced and action-packed, it takes you on a ride you don't want to stop!” J. Alexander
★★★★★ “A good fast-paced read with a fabulous female lead.” Julie Elizabeth Powell
★★★★★ “I read the other reviews and being a big Jack Reacher fan found it hard to believe that there could be a female version! How wrong was I!!! Brilliant action packed book. It really is for fans of Jack Reacher!” Stephen
★★★★★ “The depth of Tess, the lead character is surprising ... I'd recommend these to any fan of action-thrillers.” John Mariotti
★★★★★ “Great non-stop action. Why does it always feel good when the bad guy gets what's coming to him?” C. A. Gisone
★★★★★ "Fast paced thriller with suspense packed onto every page. Loved it." Michael Miller

This series is gritty, dark crime fiction, not Miss Marple, so expect some violence, occasional strong language, and every so often, a scene of a sexual nature.

The paperback edition is 603 pages long.

★★★★★ “Check out this series it's awesome. If you like the Jack Reacher books this is for you.” Bryan K Roschi