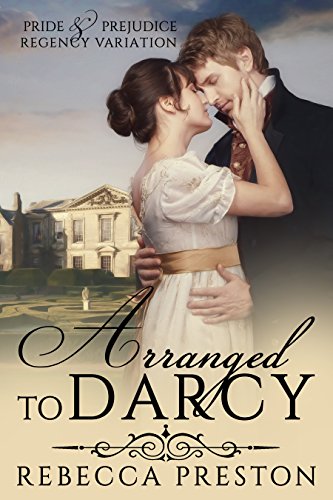 Rebecca Preston Founding author
Follow
He will need to gain her trust and her love in order for them overcome any prejudices and misunderstandings.
Genres: ClassicsHistorical Romance
Buy now
Available in:

After Elizabeth overheard Mr. Darcy call her too plain, she dismissed him as being pompous and proud. But then at the Netherfield Ball, Mr. Bennet announced to everyone that Elizabeth was going to be arranged to marry Mr. Darcy. Even though this caught Elizabeth by surprise, she knows she has no choice and accepts this is her fate.As the days go by she gets more and more furious at her situation of marrying Mr. Darcy. But she will need to fall in love Mr. Darcy in order to live a happy life after marriage. Mr. Darcy will need to gain her trust and her love in order for them overcome any prejudices and misunderstandings with each other and live in harmony.Arranged To Darcy is a full-length clean and sweet romance novel that tells another Pride and Prejudice retelling between Darcy and Elizabeth.

Elizabeth Bennet surveyed the room with trepidation. She and her sisters were only there at the behest of her mother, who insisted they attend whether they wanted to or not. Of course, Kitty and Lydia had prepared for the ball by flitting around the room, chatting excitedly about who they might see there. They teased Jane that Mr. Bingley would most certainly be in attendance, which irritated her to no end.

Mary and Elizabeth had both begged their mother to let them stay home. They weren’t interested in socializing with the Bingleys, or anyone else for that matter. But Mrs. Bennet insisted, so they were both standing in a corner, watching their sisters flirt with every available man in the room.

“Why do you suppose Mother insisted we be here tonight?” Elizabeth asked Mary, though she didn’t expect her sister to know. “Why must be we attend every event?”

Mary shook her head. “I am certain she has her reasons.”

Elizabeth grunted softly. “Oh, yes, she has her reasons.”

“I’d like to go home,” Mary continued. “I’m in the middle of a very interesting novel and would like to finish it tonight.”

Elizabeth scanned the room for her mother. “There she is. I’m going to ask her when we can go. Surely, she won’t insist we stay now that we’ve made an appearance.”

Much to Elizabeth’s dismay, Mrs. Bennet didn’t let them leave the ball. She insisted they stay until the rest of the family was ready to go. The two girls stood in the corner, waiting with as much patience as they could muster.

Once they crossed the threshold of Longbourn, they headed to their rooms without looking back until Mr. Bennet called to them.

“We must meet in the drawing room, as I have an announcement to make. You can retire afterward.”

“Oh, dear.” Elizabeth shook her head, but did as her father asked. She and Mary looked at each other, but said nothing. They reluctantly followed the rest of their family into the drawing room, where Lydia and Kitty seemed to be the only ones of the five Bennet daughters with any energy left. They were regaling their mother with stories of the ball and the interesting people they had talked to.

“We saw you dancing with Mr. Bingley, Jane,” Lydia teased her eldest sister. “You’re quite taken with him. I understand why.” She lifted her small hands and clasped them together in front of her chest, a dreamy look in her eyes. She looked up at the ceiling for a moment and then cast her eyes upon Elizabeth. “And you, dear Lizzy, I did see you dancing. With Mr. Darcy, of all people, whom I believe you said would never have the chance to spin around the floor with you.”

Elizabeth blushed furiously and shook her head, frowning at her sister. “I was being polite, Lydia. Don’t think more of it than it is.”

“It’s interesting that you danced with Mr. Darcy, Lizzy.” Mr. Bennet gave her a warm smile. The look on his face brought Elizabeth to attention and she tilted her head to the side.

“What I have to announce concerns you. And Mr. Darcy.”

Elizabeth clenched her jaw and steeled herself. If her father had anything to announce that involved both her and Mr. Darcy, it couldn’t be anything she wanted to hear. She didn’t think much of the man, as he was arrogant and pompous beyond comprehension. She was introduced to him by Charles Bingley, who was showing interest in her sister, Jane. She had immediately found him to be of distinctly low moral character, and was less than pleased about having been asked to dance by him at the ball that evening. But she couldn’t say no, as her mother was watching and would disapprove if she turned the gentleman down. Mr. Fitzwilliam Darcy, master of Pemberley, the nephew of Lady Catherine de Bourgh, was an honest and intelligent man, but had an ego that reached a heavenly level. His feelings of self importance caused him to look down on those he considered inferior to him. It was the first thing Elizabeth had noticed about him. She hadn’t enjoyed a moment of their dance that evening, having to bite her tongue the entire time to keep herself from telling him what she thought of his outlandish behavior.

He had been cordial enough but now, to be teased about it by her younger sister, she considered it to be one of the worst experiences of her life.

“I can’t imagine what you could have to announce that would involve both myself and Mr. Darcy.” She dropped herself on the settee, looking into the fireplace and admiring the flickering flames. They had such freedom; they could dance on their own and not be worried about affairs of the day. “He’s a prideful man. His arrogance knows no bounds.”

Her father looked at her with loving eyes. “I’m sorry to hear you say that, my dear Lizzy. You will be married to him within the month.”

Elizabeth felt all the blood in her face drain and her stomach turn over. She suddenly felt faint. Her reaction was quiet compared to that of her sisters, who immediately raised their voices with questions and concern. Jane was at her side immediately, sitting and taking her hand. She patted it gently.

“Mr. Bennet, when was this decided?” their mother asked, both shocked and delighted at the same time. She didn’t seem to notice the dismay on her daughter’s face. “You’ve kept this important event to yourself?”

Mr. Bennet shook his head. “No, Mrs. Bennet, only tonight did this arrangement come about.”

“Why would Mr. Darcy want to marry me?” Elizabeth asked breathlessly. “We have no money, no station in society.”

“We are a well-loved family, Lizzy,” Mr. Bennet protested. “And it will be quite profitable for our family for you to wed this young gentleman. And he spoke highly of you when we discussed this earlier this evening.”

Elizabeth raised her eyebrows. “He did? What did he have to say about me?”

Jane squeezed her hand, looking at her sympathetically. “Oh, Lizzy.” She glanced at her sister, shaking her head.

“He said that you’re a fine young woman with good breeding and manners. He believes you to be strong-willed, but competent in many ways.” Her father went to the bar and poured himself a glass of brandy. “I believe those are accurate assumptions of your character, my dear.”

Elizabeth pulled in a deep breath. She could refuse to marry Mr. Darcy, but she had her family to think of. His income would be a boost to them all, especially since, upon their father’s death, the deed to Longbourne would be taken up by Mr. Collins, whom everyone expected to somewhat ruthlessly take possession of the manor and force her, her mother, and her sisters to leave. This might prove difficult, should any of them still be unmarried. And what might happen to their mother? Mr. Bennet’s death was not approaching quickly, but it was best to be secured in case such a thing happened unexpectedly. She turned the idea over in her mind several times, trying to picture herself married to Mr. Darcy.

“You have decided for me,” Elizabeth murmured, lowering her head.

“I apologize, my dear,” Mr. Bennet responded, approaching to stand in front of her. “It’s for the best. Mr. Darcy is a gentleman with money and class. He’ll be a good husband for you.”

“He’s a disagreeable, arrogant man. And I don’t love him,” Elizabeth said weakly. “I don’t even like him.”

Her mother came to sit on the other side of her, putting her arm around her shoulders. “You’ll learn to love him, my dear. Think of what it means to this family. You’ll be in a position to provide assistance should it be needed, if something tragic were to happen.”

Lizzy put her hands over her face, trying to keep back the tears. Her future… bleak, dark, unhappy. Bound to a man who looked down on nearly everyone, spoke very little, had few positive opinions, and enjoyed insulting those he didn’t understand. Elizabeth loved her father, but it was hard to believe he had sacrificed his own daughter for the money that could be made because of it.

“Don’t weep, my dear,” her mother whispered. “You’ll be happy. Eventually. You’ll learn to love him. I’m quite sure of it.”

Her sisters gathered around her, embracing her and whispering comforting words in her ears.

It was going to be a difficult evening for Lizzy. She wasn’t going to get any sleep at all.