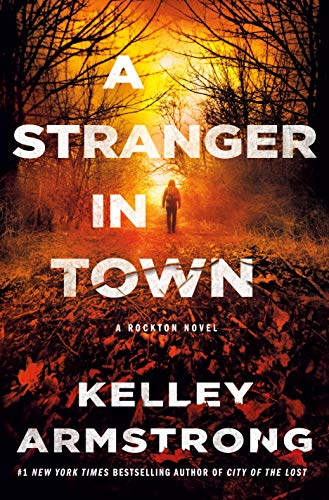 In #1 New York Times bestselling author Kelley Armstrong's next Rockton book, A Stranger in Town, the biggest mystery is the fate of the town itself.

Detective Casey Duncan has noticed fewer and fewer residents coming into the hidden town of Rockton, and no extensions being granted. Her boyfriend, Sheriff Eric Dalton, presumes it’s the natural flux of things, but Casey’s not so sure. Something bigger is happening in the small town they call home.

When an injured hiker stumbles from the woods, the sole survivor of a hostile attack, it’s all hands on deck. Even a member of the elusive Rockton council comes in to help. This council member also comes bearing news: Rockton is being shut down due to the hostile situation.

Casey and Eric must now race to save the town that has allowed residents to have a fresh start, away from the mistakes of their past, while also getting to the bottom of this latest attack. 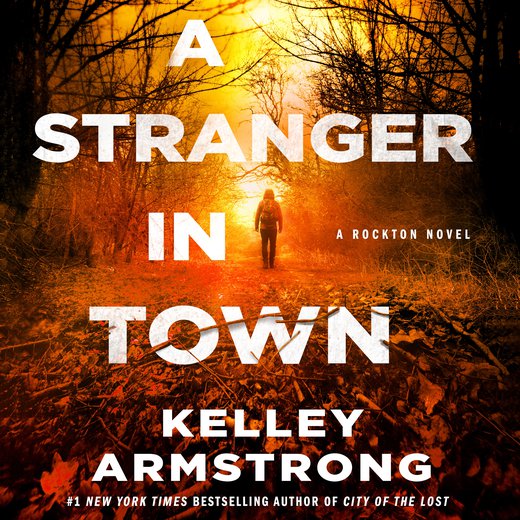 
As we hitch our horses to a lodgepole pine, shouts and laughter float over on the night breeze. Teenagers partying in the forest. At their age, I’d longed to be invited to a party like the one we hear. I didn’t yearn for the beer kegs or the drug buffet or the awkward couplings in the bush. What I’d wanted was something deeper: the fantasy of sitting on a log, a boy’s arm casually slung over my shoulders, the warmth of his leg against mine. A crackling fire filling the air with the smell of woodsmoke as it spiraled into a star-blazed sky. Charred, sticky marshmallow on my lips. The laughter of friends, telling stories I’ve heard a million times, and I don’t laugh because they’re funny—I laugh because they are a shorthand between us, warm and comforting.

Getting back to nature is at the core of that fantasy. Leave the world behind and connect with others on a level impossible to find in busy lives. Abandon the cell phones and the laptops and the tablets, and sit around a fire, drinking and talking and feeling heard. Finally feeling heard.

As a teenager, I might have fantasized about that lifestyle, but if asked to consider it for more than an evening party, I’d have laughed. By the end of the night, I’d be scratching my bug bites and blinking smoke out of my eyes and dreaming of a hot shower to wash away the grime.

Now, at thirty-three, I have lived that life for nearly two years, with no end in sight, and I have never been happier.

As I tie up my horse, Cricket, she nickers. It’s an idle complaint. They’re tied to sapling pines, easily broken, meant only to convey the message that they are not to wander. We would never secure them firmly in these woods. That’s staking out dinner for grizzlies.

I give Cricket an apple and one last pat. Then we’re off, and I’m walking toward the sound of laughter with a guy’s arm loosely over my shoulders, a mirror of that long-ago fantasy. Of course, what mattered even then wasn’t the pride of having a boyfriend but this feeling, like wearing a favorite pair of jeans, a perfect fit, deeply satisfying and comfortable.

In my teen fantasy version, there would also be a dog. I was never allowed pets growing up, so if I pictured that bonfire party, I’d show up with my dog, who’d race through the forest, getting her fill of freedom before dropping in exhaustion at our feet.

I have the dog now, too, a Newfoundland gifted to me by the guy at my side. The guy who makes sure I get what my soul needs most, no matter how much I protest.

When the smell of smoke wafts over, I think my imagination is in overdrive, supplying all required elements of that adolescent fantasy. Beside me, Dalton sighs and shakes his head.

“Is the ice still thick enough for a bonfire?” I ask.

The trees open to a scene that even my teen imagination would have dismissed as too fanciful. Which is silly really. The point of fantasies is to dream big, imagine things beyond our reality. Yet I’d always edited my dreams into the realm of possibility. Reach high … but not too high. Keep yourself safe from the inevitable disappointment of wanting too much. That was the message my parents imparted to their younger daughter.

Before me lies a bonfire on a frozen lake, against a backdrop of evergreens and snow-topped mountains. Yet the four teens wear short sleeves as the sun beats down, though it’s nearly nine at night. It makes no logical sense … unless you’re in the middle of the Yukon wilderness, during an unseasonably warm spell in early May.

We had snow just last week, and the remains still frost the treed edges of the lake. The sunny side is thawing fast, the ice so dark it looks black. The kids stay close to the shady side as they lounge on storm-felled logs. A makeshift fish rack shows off the day’s catch of Arctic grayling and lake trout. Three of the teens hold beer bottles, while the fourth sips water.

From here, they look like ordinary kids, a day of fishing serving as a fine excuse for the beer and bonfire. Obviously the fourth is abstaining to drive the group home. Yet there’s no need for designated drivers here. No cars, and no roads to drive them on.

Draw closer, and something about the group seems odd. One boy wears a T-shirt, jeans, and hiking boots, with a plaid jacket around his waist for when the sun drops. One girl also wears jeans … paired with a hide shirt and homemade knee-high boots. The other girl is dressed in hide trousers, moccasins, and a modern sweatshirt with the sleeves pushed up. And the remaining boy is completely in homemade garb, all gorgeously tanned and decorated hides. It also becomes apparent why the second girl isn’t drinking—she holds a baby on her lap.

Three of these teens have never set foot in a clothing store. Never shopped online. Never seen a computer or a cell phone or even flicked on a switch and had light fill the room. They were born out here, raised out here, and, as far as I can tell, intend to die out here.

Some people would look at these kids, happy and laughing, and credit lives free from the evils and burdens of the modern world. That’s bullshit. You can walk into any park and find teens just as happy and carefree, with cell phones tucked in their back pockets. The modern age brings seemingly endless sources of anxiety, but this life has its own worries and dangers, set at the base level of “Will I survive the winter?”

We find our joy where we can, and it doesn’t matter whether kids are taking a break from hunting for food or from studying for exams, they will find happiness in those moments of peace and freedom.

As for the fourth member of the group, he may have grown up with all the modern amenities, but in his way, he’s as lost down south as the other three would be. At the age of eleven, Sebastian went to prison for murdering his parents. He got out when he turned eighteen.

Sebastian is a sociopath. He lacks that little thing we call a conscience. He wanted a normal life, and his solution was to poison his parents and stage it as a suicide in which they realized the emptiness of their lives and ended them, bequeathing most of their fortune to charity and leaving their son just enough to get by on.

Say what you want about the penal system, but sometimes, it does what it’s supposed to: rehabilitates. Sebastian is the poster boy for that. Years of therapy—and a genuine desire to change—means he’s learned tricks to overcome what he lacks.

Sebastian sees us first and comes running like an eager puppy. Bouncing at his heels is an actual puppy—year-old wolf-dog Raoul. A fitting companion for a boy who is part feral himself. Raoul spots Storm—our dog—and gallops in for a greeting.

“Is everything okay?” Sebastian asks as we head onto the ice.

“Everything’s fine,” I say as I scoop up the baby from Sidra.

The dogs head off to explore. As I cuddle Abby, Dalton hoists a case of soda pop.

“We come bearing gifts,” I say.

“Point is,” Dalton continues, “that the venison variety, while perfectly serviceable, does not make our detective happy, and it is in my best interests to keep her happy. You two apparently know where to find our local herd of wild boar. So she’s bribing you with soda pop.”

“Oh, I have more than that, but we will start negotiations with this.” I hand Abby to Dalton and tear open the case. It’s a variety pack—orange and grape and root beer and cream soda—and I hold out two cans to Sidra. “An alcohol-free alternative for the nursing mother.”

“What does it taste like?” Sidra asks as I hand her a can.

“Oranges,” he says with a grin. When none of the other three respond, he must realize they’ve never had citrus fruit. “It tastes sweet. Really sweet.”

Sidra turns the can over, trying to figure out how to open it. I do it for her. She takes a gulp and sputters.

“It bites,” she says, staring into the can with suspicion.

“It’s fizzy,” Sebastian says. “Carbonated water.” He grabs a root beer, and they all take a can.