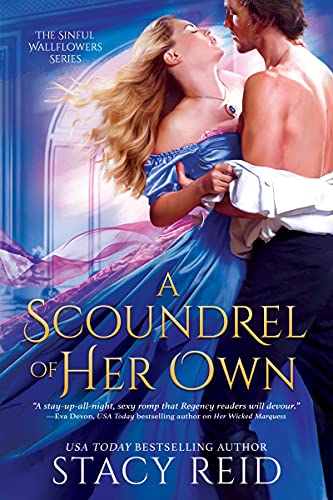 A Scoundrel of Her Own

Lady Ophelia Darby exists in two worlds. In one, she is the impudent, willful daughter of a powerful marquess and darling of the ton. In the other, she moves through the underworld's shadows as songstress Lady Starlight, protected only by the notoriously wealthy scoundrel Devlin Byrne. But when she stumbles upon her beloved father's darkest secrets, the line between her two worlds quickly blurs. Now she needs the help of the one man a lady should never trust.

Devlin Byrne stands on the edge of London society, knowing he will never be accepted. No one else knows that his obscene wealth and ruthlessness aren't without purpose. Or that his purpose has golden-brown eyes that shimmer with mischief, the palest of skin, and a lush mouth that beckons to be kissed, and deeply. But having Ophelia is only the beginning of Devlin's plans.

It's undeniable that Devlin Byrne is a dangerous temptation—but just as Ophelia begins to trust him, maybe even fall for him, she discovers she's not the only one with secrets. And his would lead her down more than just the path of scandal . . .