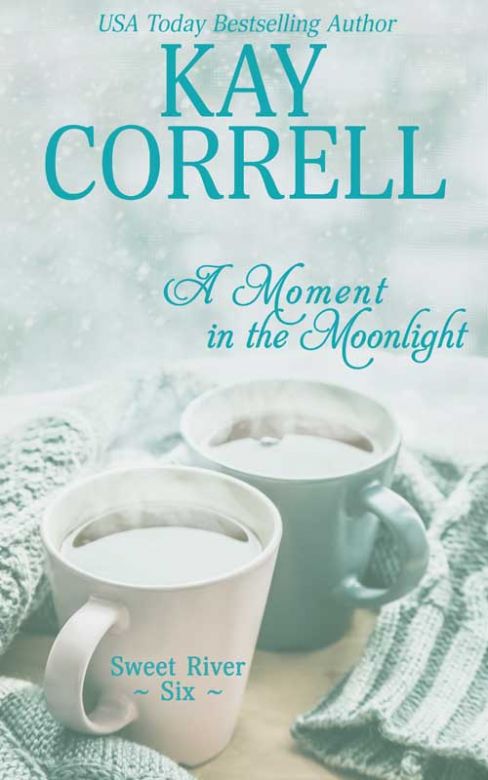 Nora Cassidy wants nothing more than to run Sweet River Lodge on Lone Elk Lake. But change is coming to the lake.Harrison Stanworth is certain his mother is not getting a fair deal on the sale of their family property on the lake and travels to Sweet River Falls to see what shenanigans his cousin is up to with the sale.While staying out of sight of his cousin, Harrison stays at Nora’s lodge and they begin a tentative friendship. A Moment in the Moonlight leads to unexpected deeper feelings.Then Nora finds out that Harrison’s family is at the heart of all her problems on the lake.Harrison’s attempts to help may not be enough and all may be lost… his family’s cabin, the peaceful lake… and Nora.A charming conclusion to the Sweet River series.THE SWEET RIVER SERIES:A Dream to Believe InA Memory to CherishA Song to RememberA Summer of SecretsA Moment in the MoonlightCOMFORT CROSSING SERIES:The Shop on MainThe Memory BoxThe Christmas CottageThe LetterThe Wedding in the Grove: a short storyThe Christmas ScarfThe Magnolia CafeThe Unexpected WeddingLIGHTHOUSE POINT SERIES:Wish Upon a ShellWedding on the BeachLove at the LighthouseCottage near the PointReturn to the IslandBungalow by the BayINDIGO BAY:(multi-author series)Sweet Days by the Bay—Kay’s Complete Indigo Bay Collection

Nora Cassidy wandered along the narrow trail that threaded beside Sweet River, watching and listening to the musical gurgling and splashing as the water slipped over the tumbled rocks. She loved autumn in Sweet River Falls. The aspens turned delectable shades of orange and yellow, and the rustle of their leaves wove an enchanting melody around her. The air held a crisp, clean, refreshing quality. She sucked in a long, deep breath, filling her lungs with the vibrant air.

She loved this daily walk from her cabin to the main building at the lodge. Her time to regroup, recharge, and run through her plans for the day. She had a busy schedule, as usual. There was a wedding this weekend at the new chalet they’d finished this summer. The Stuart sisters had that mostly under control, though.

She turned at the point where the trail veered away from the river and headed toward Lone Elk Lake. As she neared the lake, a great blue heron sat on a small outcropping of rocks. A blue heron, her late husband’s favorite bird. She smiled and waved to him.

The majestic bird stared at her.

“I miss you, you know. Every single day.”

The heron gave her one more look as if he were checking up on her and telling her to have a good day, then spread his large wings and took off, soaring above the lake.

Yes, it was going to be a great day. But she thought that every morning. Who could want more from life than all the blessings she’d been given? Running the inn with her son. Her two children happily married. And she had two healthy grandsons. And her best friend, Annie, had married the love of her life. Yes, things were going very well these days. Very well.

Okay… except for the whole rezoning of Lone Elk Lake. That was going to be a disaster if she didn’t find some way to stop it.

Things couldn’t get more screwed up if Harrison Stanworth tried. He did not have time to go gallivanting across the country, but he knew it was the right thing to do. He had responsibilities too numerous to count, but his mother would always get his top billing.

“So, you’ll go to Sweet River Falls and check out what’s going on? I’d be so sad to see the property leave our family’s hands. Generations of the Dobbs family have owned the land. I would miss going there if it’s sold. I’d go check it out myself but my silly doctor has refused to let me fly.” A frown creased his mother’s wrinkled face, though her eyes were sharp and crystal clear. “He treats me like an old woman.”

“You’re not an old woman and, I can go for you.” He tried to sound enthusiastic, but he’d already started a mental list of all the things he’d have to cancel in the next week.

“I appreciate you doing this. I do know that your cousin, Walter, wants to sell the property. He sent me the paperwork. It seems like a fair price for the place, doesn’t it?” His mother took a sip of tea from a dainty, floral teacup.

No, it didn’t. But he wasn’t going to say that to her now. He needed to do some more research.

“I still can’t imagine some other family owning the land. I just can’t. But you and Walter are the last of the family left. Well, except for me. Without another descendant of Jeremiah Dobbs to inherit it, since neither you nor Walter have children, I know someone else will own it eventually… but I didn’t think it would be so soon.”

No, he didn’t have children. He’d been too busy with his career to invest time into any relationship when he was younger. Then he’d just gotten comfortable being a bachelor.

And as far as he was concerned, Walt had done the world a great service in not procreating and passing on his genes. The world didn’t need another Walter Dobbs.

He leaned over and kissed his mother’s cheek. “I’ll wrap things up here and try to get a flight out tomorrow.”

“Thank you, dear.” She smiled. A weaker smile than usual. Her usual bright, perky self had dimmed a bit. He supposed that was expected at seventy-plus years old. Not that she’d ever admit how many years over seventy. But he’d always assumed his trim, athletic mother would outlive him.

That is until this last summer when she’d slowed down significantly. She’d given up a seniors’ exercise class that she’d done for years with the same group of women. He couldn’t imagine a room of seventy-something women doing their exercises, but it had made her happy and kept her moving. She’d even been an avid tennis player up until a few years ago.

But he’d do anything for her. It had just been him and his mother for years now. His father had died over twenty years ago.

He had to admit he was curious about how the town and their cabin and property would be now. He remembered it as a sleepy little Colorado town. His grandparents’ cabin was right on the edge of Lone Elk Lake. It was an ever-growing cabin where each generation had added on until the rambling additions had taken on a twisted, though charming, quality.

His cousin Walt lived in the cabin now. Had for years. Not that it mattered. There were no other family members who wanted to live there.

He pulled himself away from his thoughts. “I’d better go.”

“I really appreciate you doing this for me. I’m not quite up to the travel yet. This silly virus that hit me this summer, then the pneumonia. I’m not used to feeling so… unhealthy and not fit.” A determined look crossed her face. “But I’ll get over this. Just need a bit more time.”

“I’m sure you will, Mom.” He was sure. Mostly. He’d seen his mother do anything and everything she put her mind to. No reason to think this time would be any different.