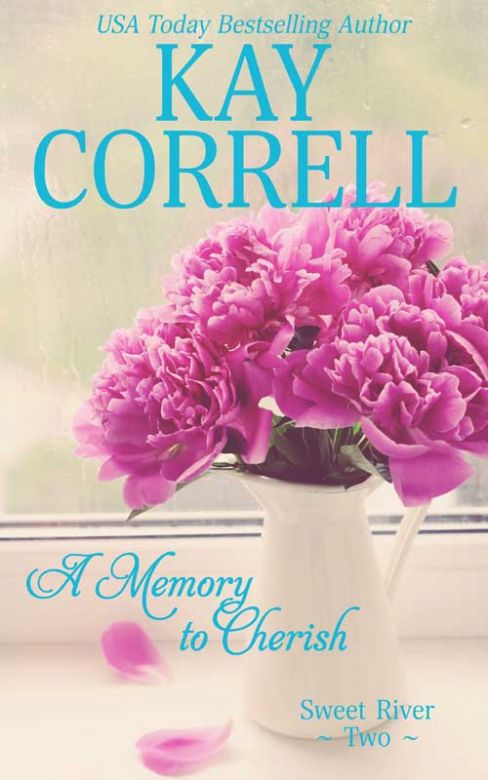 Beth Cassidy is out to prove something. To the town and herself. When she decides to run for mayor, the one thing she doesn’t count on is bad-boy Mac McKenna showing back up in her life. Mac moved away from Sweet River Falls and has no desire to have anything to do with the town that always considered him an outsider, but he can’t fight his growing attraction for the woman trying to overcome her own reputation in town. The town that seems to be having its fair share of trouble.And Mac seems to be right there every time something goes wrong. The cops and the town will never believe he’s innocent. Even when Beth’s best friend, Sophie, believes in Mac, it doesn’t totally alleviate the doubts in the back of Beth’s mind. Is Mac as innocent as he claims?Mac vows to wipe the dust of Sweet River Falls from his boots, and leave the town far, far behind. For good this time. He means it.Mac leaving for good is probably for the best. Beth is sure of it. Pretty sure…Will Beth and Mac find a way to have more than just A Memory to Cherish?A Memory to Cherish is book two in the Sweet River series. Annie and Nora, along with Nora’s daughter, Beth, and her best friend, Sophie, navigate life in the charming town of Sweet River Falls. Book two is a heartwarming story of redemption and trust.A Dream to Believe In - Book One (January 2019)A Memory to Cherish - Book Two (February 2019)A Song to Remember - Book Three (March 2019)

The tapping at the car window started again.

The rain poured down, obstructing any clear view of the man. Yes, she needed help. No, she wasn’t going to open her car door to an absolute stranger while stuck out in the middle of nowhere. That’s the stuff that always started segments of those Unsolved Mystery shows.

“It’s Mac McKenna. I live in that town you just passed a few miles back.”

Mac McKenna? Opening the car door to him might be more dangerous than inviting a complete stranger to rescue her. But she did need help, and she needed it quickly.

She rolled the window down slightly to get a look at him.

Mac McKenna in the flesh. And very well put together flesh if she remembered correctly.

“I have a flat,” she said, as though he weren’t standing practically next to the deflated front driver’s side tire.

“No, I’m quite capable of changing it myself, but it’s pouring down rain, and I’m late for an important meeting.” She sounded like a pompous jerk. He probably thought she was one.

She peered out through the pouring rain, scrutinizing what she could see of him not hidden by his cowboy hat and his rain slicker, which wasn’t much.

“I could give you a lift.” His crooked smile suggested he knew she was giving him the once over.

Accept a ride from him? What, did she look crazy? Of course, her options were slim to none. If she missed the meeting, her chances of making a good impression at the town council meeting were going to be washed away with the rain.

She’d go with him. With any luck, not a soul would see them.

“Okay. Thanks for the offer. I need to get to Watson Elementary School.”

He delayed an almost imperceptible moment in answering. “Sure, no problem.” He tipped his well-worn cowboy hat farther back on his head to keep the rain from dripping down on her as he swung open her door.

Beth grabbed the box resting beside her and piled her purse and some books on top of it. She tried to maneuver out while balancing the box.

“Here, let me get that.” He confiscated the box, tucked it under one arm, and reached out a hand to help her.

She ignored the hand and quickly slid out of the car, carefully locking the door behind her. He spread his rain slicker out to the side and tucked her close under his arm. Safe. Dry. She couldn’t squirm away without being obvious… and wet.

He led the way to an old red pick-up truck parked behind her car, opened the passenger side door, and she slipped inside. He unceremoniously dumped the box on her lap and closed the door.

The inside of the truck was meticulously clean. Worn leather seats, cleaned and polished. Dashboard clear of the bits of paper, receipts, and pens that cluttered her own car.

He paused as he started to haul himself in on his side. “What’s wrong?”

“I have one more file in the trunk that I need.” The file had facts and figures she’d painstakingly put together for tonight’s meeting. She couldn’t show up without them.

He reached out his hand while she used every ounce of her concentration to keep from shrinking away from it. “Give me your keys. I’ll get it.”

“In case you’ve forgotten, it’s raining out here.  Just give me the keys. I’ll be right back.”

She handed him the keys. “It’s on top of a stack of stuff on the left side of the trunk.”

She squinted, trying to watch through the window. She saw him dash through the rain, open the trunk, grab the file, and hurry back. He climbed in, pushed the file at her, then coaxed the truck to life. He pulled the truck onto the road and concentrated on driving through the pouring rain. The radio played country music quietly in the background. He nodded his head at her. “Seatbelt.”

“What? Oh, sure.” She grabbed the belt and buckled up.

The wipers swished back and forth, trying their best to clear the window. She didn’t know how he could even see the road, and this wasn’t a mountain road to mess with. Knowing the luck she was having today, she’d end up in the ditch with him out here in the middle of nowhere, no better off than she’d been back there with her flat. Well, actually, quite a bit worse off.

Just what she needed right now, another complication.

He drove on in silence. Not a word since the admonishment to buckle up. The air in the truck crackled with tension. Was it just the strain of driving in the torrential rain, or was he upset with her? She hadn’t meant to jerk away from his offered hand when getting out of her car. But all her instincts were in overdrive. This was Mac McKenna. Trouble. With a capital T.

She’d been a few years behind him in school, but his reputation was legend. The same school district that now employed her. The school where the town council meeting was being held tonight in the gymnasium. That school.

She turned toward him in the cab of the truck. She hadn’t even told him her name. Maybe it was safer that way. An anonymous face. No, she was being paranoid. “I don’t know where my manners have gone. I haven’t even introduced myself. I’m Beth Cassidy.”

“You do?” Did he remember her?

But he supplied no further information. Instead, he stared out the window, squinting in an effort to see through the shower of rain descending on the windshield.

He stole a quick glance at her. “After I drop you off, I’ll go back and fix your flat.”

“No thanks, Mr. McKenna. I’ll get someone to drop me back off by the car.

“Mac. Just Mac. Not Mr. McKenna. And suit yourself on the car. I was just trying to help.”

“Thanks anyway… Mac. I’ll take care of it after the meeting. I do know how to change a tire. I just don’t want to be late to this meeting.” Or show up bedraggled in sopping wet, muddy clothes. She needed to look organized, efficient, and competent.

Then the hail started, bouncing off the roof of the truck and sounding like God was pouring down buckets of stones on them. Mac pulled the vehicle off the side of the road at a small turnoff that she knew overlooked the town of Sweet River Falls. It also had a steep drop-off. She hoped he knew that. She caught her breath as the truck rolled to a stop near the edge.

He seemed oblivious to her angst. “Can hardly see anything. Let’s give it a few minutes to let up.”

She glanced at her watch but realized there was nothing else they could do. It was suicidal to drive on these mountain roads in this storm. Hopefully, it would let up soon. She had to get to that meeting. For the hundredth time, she berated herself for taking the shortcut home from Denver. She had wanted the grant forms signed and didn’t want to wait for them to be mailed. She wanted them in her hands, signed, so she could… Well, so she could show them off at the meeting. Prove that she always had the town’s best interest at heart.