When the ghost of a murder victim appears in Last Chance Books, middle-aged bookstore owner, Willa Chance, must find the ghost's killer or risk being haunted with its unwanted advice forever.Too bad the ghost suffers from amnesia and only has a few scant clues as to the identity of the killer. That's okay, though, because Willa has a pretty good idea who did it ... until her investigation turns up additional suspects with curious motives.Meanwhile her cat, Pandora, is on the hunt for a mystical kitten that the cats of Mystic Notch must bring into the fold before the kitten is enticed to the side of evil by a powerful foe.When Willa's own life is threatened, she enters into a race against time to figure out the identity of the killer before she becomes the next victim.

“I just know I’ll win first prize with these,” Paisley Brown's red-tipped nails clawed the pages of the binder open to reveal the most unfocused and unappealing photographs I’d ever seen. “Don’t you think so, Willa?” She searched my face with heavily mascaraed eyes.

“Umm … sure.” I stared at the photos. Win? I didn’t think so. The pictures were horrible, but I couldn’t say it to her face no matter how abrasive and annoying Paisley was.

Besides, I was just there to collect the portfolio, not to pass judgment. That would happen next week at the fifth annual Mystic Notch Art Show, of which I’d had the unfortunate honor to become one of the judges. We had a last-minute spot open up and Paisley seemed to be under the impression that her work was just the thing to fill it.

“I’ve titled the series Main Street Reflections.” She flipped the binder shut and held it out to me. “The photos are all of reflections in the Main Street windows during some of the town events.”

“How clever.” That explained why they were so blurry.

I took the binder and she brushed past me, her cheap perfume tickling my nose as she wriggled down the aisle of her photography store in a tight jean skirt and short-sleeved pink cashmere sweater bursting at the buttons. My brows jumped up a fraction of an inch as I watched her. I was no prude, but her clothing choice was a bit revealing for someone her age, which I guessed to be mid-forties. But then, I’d heard Paisley liked to flaunt it.

I couldn’t help but glance down at my own choice of attire. The faded jeans and loose gray tee-shirt provided a sharp contrast to Paisley’s outfit which, I had to admit, didn’t look all that bad on her. She had a good figure. Curvy. Mine, while not as curvy, wasn’t too bad either, especially considering I had a good six or seven years on her.

I could have looked good in her outfit if I’d wanted to. It just wasn’t my style.

I brushed a smudge of dirt from the hem of my shirt. Being a bookseller that specialized in used and antique books, I came in contact with lots of dirt and it frequently found its way onto my clothes. You wouldn’t believe the condition of some of the books people brought into my store—straight out of the attic or basement and loaded with decades of grime. But that was what made the job so much fun. You never knew when you’d find a rare book under all that dirt.

I glanced across the street at Last Chance Books, the bookstore I’d inherited from my grandmother. The name was a clever play on our last name, ‘Chance’, and the fact that the store sold used books, giving them a last chance at being read.

A feeling of pride washed over me as I admired the books stacked in the squeaky-clean display windows. The oak door sat in the middle of the two windows with my name, Wilhelmina Chance, Proprietor, proudly displayed. My feelings of pride soon turned to trepidation as I saw my cat’s face pressed against the glass of the bay window to the left of the door. She was glaring back across the street at me, a gleam of malice in her golden-green eyes that promised some sort of retribution for leaving her alone in the store.

That reminded me—I’d better get going to the meeting so I could get back in time to open my store before the morning rush of tourists looking for something to read was over.

“I’ve already bought the tents and tables for my display and am putting these frames together so they will all match.” Paisley had made her way to the center of the studio and was pointing to a pile of wide, black lacquer frames.

“Those look expensive.” I inched my way backward toward the door.

“They were, but I think the investment will pay off in spades, especially if I win the blue ribbon.”

I took another step backward, my heart tugging just a little for Paisley because I knew she had probably wasted her money. I didn’t know why I felt the urge to help her out. I barely knew her and what I did know, I didn’t like. Guess I was getting soft in my old age.

“Maybe you should wait until we award that last spot before you spend more money,” I suggested.

The art show was a juried show that ran for a week before the judges voted and awarded the twenty thousand dollar prize to the best in show. We’d actually already picked twelve artists, but one had to bow out and we had a last-minute opening. There had already been several prospective applicants whose portfolios we’d reviewed. Paisley was the last one we would look at before making our decision.

I thought of Neil Lane, the reclusive artist. Rumors abounded about his secretive past. I didn’t know what he had done before, but now he painted gorgeous watercolors. He was the favorite so far for that open spot and I was sure he would beat out Paisley.

“Oh, don’t be silly. I know I’ll get a spot in the show,” she said with the certainty of a snake charmer who has an ample supply of anti-venom.

“Honey, I’ve learned that to get ahead in life a girl has to do whatever it takes to get what she wants.” She winked one mascara-clumped eyelid at me. “I want that spot in the art show, and I’m pretty sure I’ll be getting it.”

The door to her shop opened and she turned her attention to her new customers, leaving me free to make my getaway. I gladly exited and crossed the street to my Jeep. I tossed her portfolio on the passenger seat, my forehead wrinkling as it flipped open to one of the pictures—a shot of the reflection from the double windows behind the sidewalk tables in front of the Mystic Café. It must have been taken during the Founders Day parade because I could see the sign announcing the café's Founders Day specials. The photograph was neither artistic nor interesting. Barely better than a child could do. There was no way this work would be chosen for the art show, would it?

Yet, Paisley had been so certain and I got the impression it wasn’t just her overly inflated self-confidence talking. Glancing back across the street, I couldn’t help but wonder just what Paisley Brown had done to be so sure the judges would vote for her. 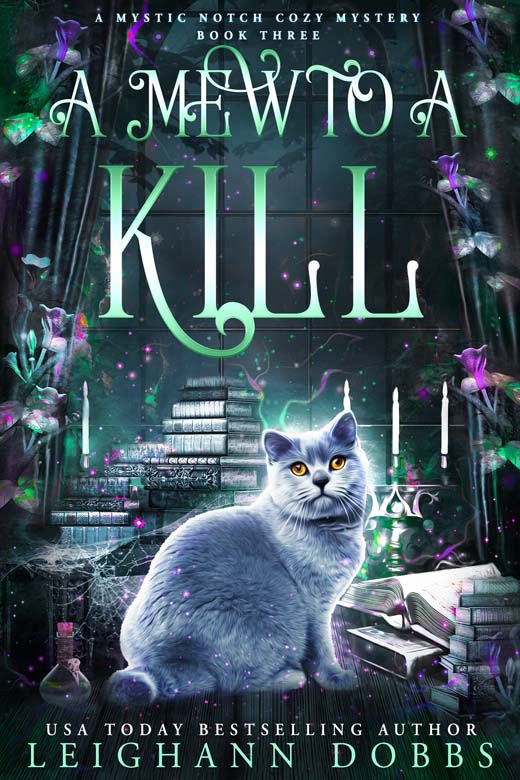