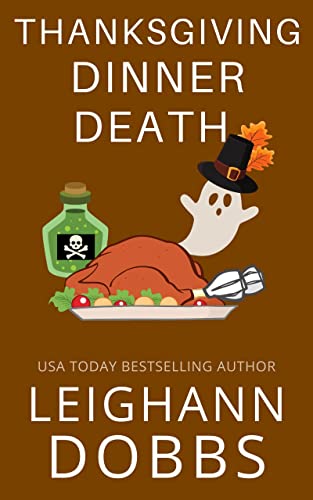 A new month, a new holiday, and Juniper Holiday is ready for stuffing to happen!

This year, Juniper has invited most of Crescent Cove to her Thanksgiving feast. Even that annoying Detective Mallard and his gang of ducklings.

The mansion is decorated. The table is set. The cooks (both living and ghostly) are trying new recipes. Everything is perfect until someone ends up face-down in the pecan pie.

Juniper is determined to solve the case before Detective Mallard can ruin her fun with his rules, but will she manage it before the killer decides to try again, or will this Thanksgiving meal be Juniper’s last supper? 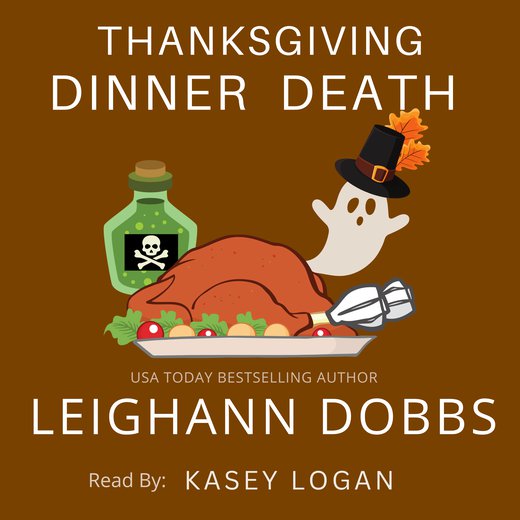 The Holiday mansion was currently a madhouse. Thanksgiving was the next day, and there were dozens of people in Juniper’s kitchen, running around like chickens with their heads cut off in their haste to get everything ready in time. Naturally, Sabrina couldn’t be expected to cook for hundreds of people on her own, so Juniper had called in Bite-Sized Catering to help out with the spread, and Sabrina was ordering them around like a general on the battlefield. Her mother would have been proud.

The savory aroma of roast turkey mingling with cinnamon and spices made Juniper’s mouth water. Golden-crusted pies had been set on the table to cool, and the helpers were chopping and mixing to prepare some of the food ahead of time.

Up until a few minutes ago, Juniper herself had been helping, too, but she could sample the fare only so many times before she was ordered out. Which, honestly, was totally fine with her. She needed some fresh air anyway.

Before she could make it out the door, Jacobi, her ghostly cook, stopped her. “Why do you continue to let that woman butcher my family’s recipes, Juniper Holiday? Do you know how long it took us to perfect them? Hmm?”

Juniper had to bite her tongue quickly in order to keep from saying the exact wrong thing, which would set Jacobi off. The last time she’d spoken without thinking very carefully about her words, he’d thrown a ghost-sized tantrum, and everyone had suffered for it. She still couldn’t eat lemon meringue pie without tasting salt.

She cleared her throat. “A very long time?”

“Indeed,” Jacobi affirmed, puffing his chest out with pride. “Every ingredient was carefully chosen in order to perfectly complement the dish.” His bushy brows suddenly lowered over his ghostly eyes. “And that woman is ruining everything!”

Juniper sighed to herself. He had to be talking about the dressing. “Jac, honey, I’m sure Sabrina didn’t mean to butcher the recipe,” she said, “but you have to understand that she’s under a lot of pressure right now. She’s got dozens of people in her kitchen who don’t know how she runs it, and you shouldn’t blame her. Besides, you should at least try her improve—er, changes to your treasured recipes before you complain they’re ruined. That’s fair, ain’t it?”

Jacobi continued to stare at her in ghostly anger, his form slowly bobbing up and down in front of her. Then, with a great

sniff, he began to rise toward the ceiling, glaring at her the whole way—and there was a good fifteen feet to float—until he disappeared.

At least he didn’t make the food explode, she thought, rubbing her temples.

Remembering her original plan, she scooted down the hall to the foot of the main staircase, taking time to admire the holiday décor as she went. She hadn’t gotten too carried away because she planned to break out the Christmas decorations right after Thanksgiving, but she wanted the place to look festive for the dozens of guests who would arrive for the meal.

Displays of pumpkins were set about in various places. Big pumpkins, small pumpkins, orange pumpkins, white pumpkins. It was quite a display. The fireplace mantels had been draped in garlands of fall leaves in bright red, yellow, and orange, and colorful flower arrangements completed the look.

“Tori!” she yelled up the stairs, which had been draped in a fall-themed garland, “I’m going into town. You need anything?”

Three sets of feline eyes blinked back at her. The housecats, Loki, Luna, and Finn, had been banished from the kitchen and dining areas for the dinner. No one wanted cat hair in their gravy. The cats were quite annoyed at this, and Juniper could see the recrimination in their luminescent gazes. She knew she had better be on her guard, because she was sure they would find some unpleasant way to pay her back.

“What are you going for?” Tori yelled back.

“I’ve been banned from the kitchen.”

“Ha! Bring me back a coffee and I’ll love you forever.”

“You’ve promised me that dozens of times already.”

“All right,” Juniper called back, shaking her head and rolling her eyes as she made her way out. Her dear goddaughter liked those sticky-sweet concoctions from WitchRoast Café, whereas Juniper preferred a bold, dark roast with a hint of cream and a touch of sugar.

At least Tori didn’t like stump water, which was what Juniper called any coffee that wasn’t so strong that a spoon could stand up in it on its own. She would have had to disown her for that.

Peeling out of the drive in her pretty little GT, the radio blasting “Killer Queen” by Queen, Juniper made the trip into town.

The smell of fall was heavy in the air, touched with a hint of winter waiting around the corner, and Juniper breathed it in as she got out of her car and headed into the warm, cozy interior of the cafe. The smell of coffee and pastries was strong as she stepped inside, and she nearly moaned at the delicious aroma.

“Hey, June!” Quincy Gilbert greeted her from behind the counter.

She raised her hand in a wave. “Hey, Quince.”

“Yep,” she said with a nod. “And Tori wants something sweet, so maybe that unicorn-looking drink on the menu for her.”

“You got it,” he said with a chuckle.

Juniper moved to sit at one of the tables next to the window to wait. Not long after she’d sat down, a young woman with long dark hair took the seat across from her and slid something across the table to her.

“Put that on,” the girl said, lifting her hand to reveal a small sterling silver ring fitted with a black stone.