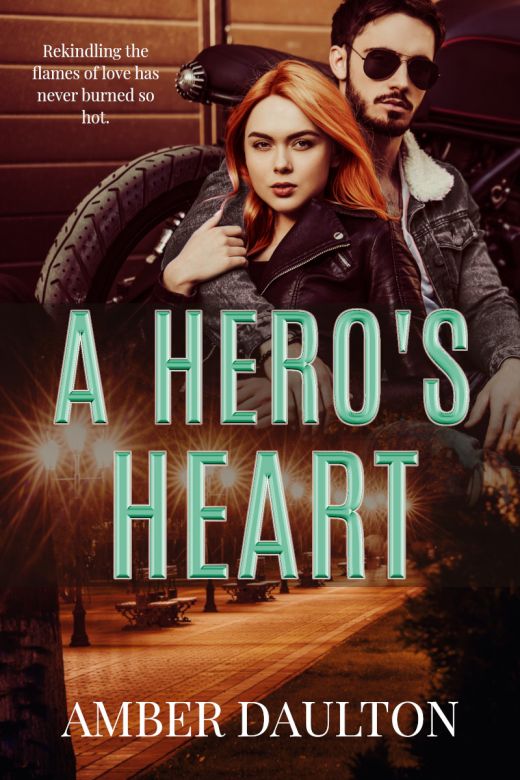 After an undercover mission goes awry, DEA agent Jarrett Brandt hides out in the last place he wants to be—his hometown. Now he’s stuck with his judgmental parents and the memory of his perfect brother hanging over his head. His one bright light? Marissa Reinn Brandt—his high school sweetheart and former sister-in-law.

Marissa lost Jarrett once before. No way will she let him back in; then her son offers him their guestroom. His wicked charm and smoldering stares are hard to resist, but she’ll make him work to reclaim his spot in her bed.

When his enemies close in, how will Jarrett keep Marissa and her son safe, or will he lose his shot at redemption?

I love redemption stories, family drama, and tortured, unconventional heroes, so A Hero’s Heart hits all the sweet spots. Jarrett and Marissa have dealt with a lot of heartache—much of their own making—but what’s life if not to love and learn, and try again? I enjoyed giving them their long-awaited happily ever after, and I hope you had a blast reading it.

Anyway, I have an exciting opportunity to share. You can sign up for my bi-monthly newsletter absolutely free. You’ll be the first to see photos of my cats (because who doesn’t love pets?!), have the chance to win awesome prizes and vote in contests or polls, and hear about my cover reveals, new releases, sales, and exclusive excerpts.

As my thank you gift for you hanging out with me, you have the chance to download a FREE short story that you can’t buy anywhere. It’s so much fun!

“You can trust me, Jarrett. I won’t tell your parents anything you don’t want me to.” She sighed and stood as well. “You used to tell me everything. We never kept secrets.”

Jarrett paced between the coffee table and fireplace. “My parents’ opinion doesn’t matter. Dad would still throw up my juvie record or the fact that I’m not a cop, even if I was a model citizen. I’m not that lost, angry kid anymore. I know who I am now, and it’s not someone you’d want to know.”

“God, you don’t understand. Marissa, I’ve missed you so damn much. I’ve laid awake so many nights wondering what my life would’ve been like if I’d stayed here.” When he made love to other women, he imagined Marissa beneath him or above him, panting his name. When the nightmares of blood and gore faded, he dreamed of her. Those bittersweet memories and what if scenarios were almost worse than the nightmares. “I’ve done things I’m not proud of.”

“I hated you after you left, but I’ve gotten over it. Everyone feels regret and guilt over something. It’s all about being human.” She dashed away her tears. “I told you mine last night. Will you please show me the same courtesy?”

“At least tell me what you did last Christmas. Jason made it crystal clear that he didn’t want you alone. He wants you to have a tree.” She pointed at the Douglas fir. “Well, there you go. What did you do last year?”

Jarrett licked his dry lips, heat swelling in his cheeks.

He’d joined the Consuelo gang last December and spent the holiday in a slummy apartment with five thugs who sold cocaine on the streets of Albuquerque. Living around his drug of choice had nearly destroyed him.

“What about your last birthday?” Marissa blocked his path and braced her hands on her hips. “Did you have cake or go out with a bunch of buddies and get drunk? Did something horrible happen? Why won’t you tell me anything?”

He shoved a hand through his hair. “Damn it, Marissa. Yeah, I got drunk. A few of us went to a strip club where I fucked two dancers in a backroom. Is that what you wanted to hear?”

Her eyes widened as she stepped back.

Way to go, you fucking idiot. He brushed his shaky hands on his button-down shirt to steady them. “Marissa—”

She strode past him with a high head and left the room.

Her cold shoulder skewered him, but he didn’t deserve better.