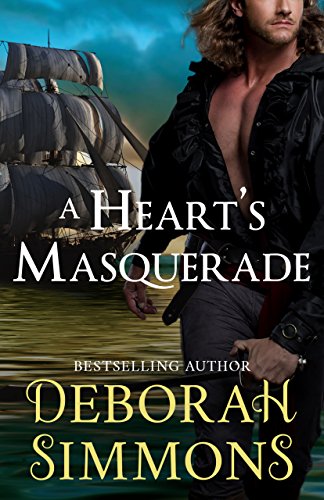 "This is a fun-filled adventure with pirates, villains, lords and ladies, suspense, romance, and much more."

Romance and Adventure on the High Seas

An attempt on her life forces Catherine Amberly to flee her manor house for the role of cabin boy on a ship bound for the Caribbean. But the threats she thought left behind follow her into the heat of the tropics, and soon she faces a more potent danger in the form of Ransom Duprey. When she finds herself falling for the privateer captain, Cat abandons ship for the life of a lady once more.

Ransom has his own enemies—and suspicions about the beautiful young woman in the Barbados ballroom. Although they've never met, she seems to know him better than he does himself, and the more she denies him, the more determined he is to uncover all of her secrets...

Catherine Amberly felt her horse shy nervously at a rustling in the dry leaves underneath the great oaks. “Easy, Jackson,” she whispered. She was riding the great hulking beast for the first time, her own horse having been sold, but she was surprised at his jittery behavior. She was an expert rider who normally handled even strange horses with ease.

Against her will, Catherine felt a measure of the animal’s disquiet transfer to her as she heard the noise again. And she was not relieved to recognize the sounds that heralded another rider. It could be the groom or another servant sent to fetch her, Catherine thought, only to dismiss those possibilities. For where among the acres of Wellshire Manor would they know to find her? Unless she had been followed.

The answer was swift in coming as the sounds grew louder, and she sucked in a breath when she saw a black gelding appear along the path. “Oh, Edward, you startled me!” Catherine said. Although she tried to keep her voice light, it sounded strained even to her own ears, and her heart pounded with fear.

“Sorry, dear cousin,” Edward said with his most insincere smile as he edged closer.

Forced to tighten her grip on the reins as Jackson backed away, skittish at the presence of another horse, Catherine felt a stab of irritation at her mount for demanding her attention when she needed all her concentration to deal with her cousin. Taking an unsteady breath, she looked across the few feet that separated the two horses and studied the man she suspected of murdering her stepfather.

He was as dark as Catherine was fair. Her golden hair fell about her shoulders in a shiny mane, and her pink cheeks glowed unfashionably. The green color of her eyes, similar to those of more than one feline, had earned her the nickname Cat. Although they had sparkled with mischief for most of her sixteen years, now they were devoid of luster as she regarded her cousin.

Edward’s heavy-lidded black eyes, close-cropped black hair, and full lips give a sensual cast to his face that was not lost on the female population, but Cat had never found him appealing. She thought his skin too pale and his dark eyes too menacing. And she suspected the smooth polish of his manners disguised a core so rotten that he had killed his own uncle without remorse.

Still, she was not ready to accuse her cousin, especially when they were alone in a deserted stretch of forested land, so she struggled for an innocuous subject of conversation. Before she could speak, however, Edward’s voice, thick with loathing, broke the stillness.

“I congratulate you, cousin. You are a better rider than I expected. I see that you handle the stallion well, but then you are full of surprises, aren’t you?’

Her gaze never leaving Edward’s face, Cat tried to ease her horse away as he continued talking, his mouth twisted into a leering smile. “This sudden interest in your stepfather’s death, for example. I never expected a little thing like you to cause me such trouble. I had hoped to profit from our relationship, but I can take no chances now. I want this to be neat and tidy.”

“What are you talking about?” Cat asked with only partly feigned surprise as she struggled to hold her horse.

“A poacher’s stray bullet killing both Lord Wellshire and his stepdaughter would be stretching credulity, wouldn’t you say? That’s why I’m so glad I got you that horse. A riding accident will be just the thing. And she broke her pretty little neck...” Edward laughed aloud as Cat urged Jackson toward the edge of the woods.

“It will do you no good,” Edward said as he watched her maneuvers. “Even you, dear cousin, won’t be able to handle that nervous brute much longer. You see, he doesn’t like enclosed spaces like these woods, and he especially dislikes loud noises.” Edward’s grin widened as he reached into his cloak.

Cat barely glimpsed the pistol before she kicked in her heels, sending the horse toward a break in the trees, desperately hoping to reach the open fields before Edward could fire. She’d made it to the border of the forest when the shot rang out, ricocheting off wood close behind her. Jackson reared, his forelegs pawing the air. Ducking to avoid tree limbs, Cat struggled with the reins as the stallion tossed and pranced, then suddenly broke free of the woods, flying onto the pasturelands, Edward on their heels.

Counting on her cousin’s poor horsemanship to hold him back, Cat struck for the road and the village, where she hoped she would not be murdered in broad daylight. She was thankful for her years of riding and her strong mount as Edward fell behind. Although the village lay some distance ahead, the road came into view, revealing a lone rider whom Cat prayed would deter Edward from his pursuit. She held on for dear life as Jackson, still frothing with fright, raced down the hill. Fighting to keep the horse along the beaten track, she shouted for help.

Either her words reached the horseman or he simply deduced from her flying hair and billowing skirts as she clung to the horse’s neck that her mount was a runaway, for she soon heard the other horse charging along beside her and she felt Jackson finally slow, his sides heaving.

As the horse was brought to a halt, Cat’s heart, nearly bursting, stopped its painful racing. She opened her mouth to speak, but the world suddenly seemed clouded in gray. With embarrassing certainty, Cat, who viewed swooning females as idiots, knew that she was about to join their ranks. Without even catching a good look at the stranger who had come to her aid, she fainted dead away into his arms.