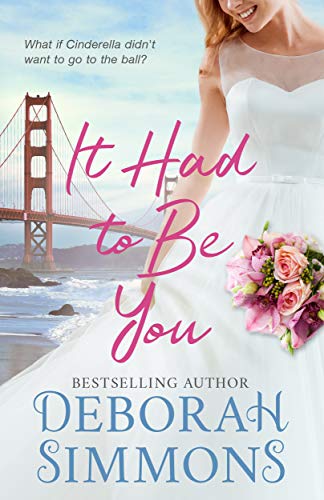 "Unique and romantic, It Had To Be You by Deborah Simmons will capture you and delight you from page one until the last line."

What if Cinderella didn't want to go to the ball?

Wedding planner Paige Porter doesn't believe in fairy tales. She's seen too many bridezillas, randy grooms, and short-lived marriages. But would-be fairy godmother Beatrice Maitland has other ideas. Her grandson Siegfried is one of the city's most eligible bachelors—if anyone could drag him away from his computer lab.

As CEO of The Maitland Company and the latest in a family of inventors, Siegfried might forget to eat or sleep, but he can't forget Paige Porter. He might even have to put aside his all-consuming research for a new venture: Project Paige.

Because when he saw her he knew: It Had to Be You.

The bride was having a meltdown.

It had not reached reality show levels yet, but Paige was not about to stand by and watch when she knew how quickly things could go south. Or even more south. Although the young woman in a diaphanous gown and veil might resemble an angel, she was shrieking like a banshee while brandishing the four-inch heel that had once been attached to her strappy sandals.

Wading through the horror-stricken bridesmaids who gathered around feeding the frenzy, Paige made her way to her client.

“Don’t panic,” she said as she wrested the stiletto from the young woman’s fierce grip. “What about your backup shoes?”

Paige was a firm believer in backup shoes, simply because so many brides chose really uncomfortable ones for the ceremony. Afterward, most were more than happy to don a less painful pair.

“I can’t wear those!” the bride practically screamed.

Okay, so that was not an option. “Where did you get these?” Paige asked. A minute after hearing the reply, she had turned away and was speaking softly into her headset, connecting to the shop. But the style was gone. Every single size.

Turning back to her client, Paige reached for the sandal. “I’ll take care of it,” she said in her most reassuring tone.

“I’m not wearing any other pair,” the bride warned, her flawless face red with fury.

“Of course not,” Paige said soothingly. Her calm, businesslike manner was usually enough to settle an erupting bridezilla, a television creation that had spread alarmingly to ordinary women.

Paige took care not to mutter to herself or even shake her head as she headed out the open door of the church dressing room. At times like these, she began to dream of an easier line of work, like bar bouncer or snake handler.

Although both seemed an improvement, she had a job to do. And once alone in the vestibule, she dug into her satchel for what she needed.

Her secret weapon was the most powerful of glues, and she used it on everything from broken jewelry and headpieces to decorations. Although she had never tried it on shoes, she did not doubt its miraculous abilities.

However, since the bride might not share her confidence, Paige applied the remedy out of sight, then held the pieces together. After waiting several precious minutes, Paige slipped out of her footgear to test the results.

Although she wobbled in the ill-fitting high heels, the repair held. And just in time, she thought as she glanced at her watch.

Out of the corner of her eye, Paige saw a figure and hoped she hadn’t been caught out. Putting her own shoe back on, she straightened and turned as if nothing were wrong. She’d rather be taken for a foot fetishist than admit to any problems with a wedding she was handling.

The genteel older woman who faced her did not appear dismayed but eyed her closely. Perhaps a little too closely.

Paige flashed a professional smile.”May I be of help?”

The woman shook her head. “Thank you, dear, but I’ll find an usher,” she said, waving Paige away with an airy gesture. “You carry on.”

Nodding, Paige hurried back toward the dressing room, but something made her glance over her shoulder. The well-dressed lady was staring after her, a knowing expression on her face.

Paige felt a pang of alarm. Would proof of the shoe debacle find its way online? But no. The guest held no phone. Nor did she look like the sort who would post an embarrassing moment for all to see. And yet, there was something odd about the encounter...

A whispered shriek from behind closed doors reminded Paige that she had more important things to worry about, and she forgot about the stranger. For now.

By the time the reception was nearly finished, Paige was setting her shoulders to keep from slumping over. But, despite a few glitches, the show had been a success, which could only do her business good. She savored that accomplishment even as she watched for any last-minute troubles.

Paige turned to see the woman she had spoken to earlier in the vestibule, and her uneasiness returned. She braced herself for some kind of complaint about the seating, the food, the loudness of the music, etc., even as she summoned her professional smile.

But the woman did not look annoyed. At Paige’s nod, she reached out to take her hand in a gentle clasp. “I’m Beatrice Maitland.”

Her white hair was fashionably cut, her simple suit was tasteful, and she held herself in a manner that spoke of old money. Gesturing toward the linen-draped tables, festooned with white roses and crystal, and the gorgeous views of the bay beyond, she smiled.

“Thank you,” Paige said, enjoying the rare praise. If anything went wrong, the wedding planner was always to blame, but few people noted a job well done.

The older woman studied her closely. “We need someone like you.”

Paige’s tiredness evaporated at the prospect of a new client, especially one like this woman: elegant, classy, moneyed...

“And perhaps you need us as well,” Mrs. Maitland said.

“Well, we’ll see,” Mrs. Maitland said, with a graceful wave of her hand. “In the meantime, my granddaughter is engaged, and we could use your expertise. Nothing too elaborate. For several hundred guests, I would imagine.”

Paige blinked at this unexpected opportunity, which might provide her the cachet she’d been lacking, an entrée into a more exclusive market.

“I’m sure you’ll be able to manage quite nicely.”

Paige nodded, trying not to look too eager. “Shall I give her a call?”

“Oh no,” Mrs. Maitland said. “You had better come out to the house. You’ll have to meet Siegfried, of course.”

Mrs. Maitland smiled. “Oh no, dear! Siegfried is my grandson. He’s the one paying for it all.”

Paige kept her face impassive as the woman handed her an elegant business card.

“Can you come tomorrow at five o’clock?”

Paige nodded, glancing down at the handwritten number on the back. And when she looked up, Mrs. Maitland was gone. Paige blinked but could not find her among the guests who were drifting off now that the bride and groom had been whisked away.

With a shake of her head, Paige realized the party was winding down and soon she could make her escape. As if on cue, her assistant Zoe appeared, hurrying toward her on ridiculously high heels.

Dark where Paige was fair, Zoe was the artistic heart of their enterprise. She had but one real goal: to marry well. Meanwhile, she enjoyed trying out her wedding day ideas on others. Her dream ceremony had blossomed accordingly, so that in order to pull off the envisioned event, she really would have to marry well.

Paige did not share her assistant’s objective. Coming from a single-parent household, she was determined to rely on herself, not any man. And she’d been building her business with no other thought in mind, except perhaps the vague wish for a house of her own, which in the Bay Area required more cash than she had... yet.

“What were you doing with Bebe Maitland?” Zoe asked, breathless from her race across the grass.

“Maitland family?” Paige echoed. As a displaced Midwesterner, the finer points of the city’s social structure were sometimes lost on her.

“Hello? They’re the Bay Area’s resident clan of eccentrics, rich eccentrics,” Zoe said, looking exasperated. But Paige was used to that look, which came when she didn’t know the name of San Francisco’s current Most Eligible Bachelor or what club was the hottest of the moment.

Paige felt the air leave her lungs at the prospect of arranging such a wedding. This could be the opportunity she’d been waiting for, she thought, turning over the card in her hand.

“The Maitland Company,” she read aloud.

“Duh!” Zoe said. “The family founder was an inventor, plastics or explosives or something. Anyway, they’ve been raking in the money ever since.”

The name did sound familiar. Paige stood staring at the lettering while Zoe expounded on how much Bebe gave to charity and how little anyone ever saw of the scions of the city, the “truly important,” which in Zoe-speak probably meant “really eligible.”

Paige tried not to get her hopes up too high, which was probably a good thing because Zoe suddenly fell silent. Since her assistant usually talked nonstop, that was never a good sign.

Paige glanced up to see that Zoe was wearing her thoughtful face, a sort of scrunched-up frown that would make anyone else look bad, except that Zoe was too gorgeous to ever look bad.

“What?” asked Paige, wondering if there was a catch. Was the granddaughter the sort of demanding, spoiled heiress who could make her job a living hell? Or was Bebe herself difficult? She had seemed a bit odd, though not in a bad way.

Zoe bit her lip. “Well, they are eccentric,” she said.

“And what does that mean, exactly?” Paige asked, her eyes narrowing.

Zoe sighed and gave her an apologetic smile. “They’re probably one of the weirdest families San Francisco’s ever seen, and that’s saying a lot.”