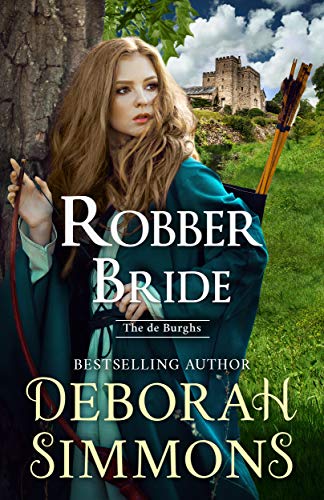 "A delight to read... Robber Bride has an interesting plot, lots of tension between Simon and Bethia, and a few interesting secondary characters, including Simon’s brothers and the steward of Baddersly Castle. The hero is unique and the heroine wonderfully capable."

Rebecca Ekmark
All About Romance

“The de Burgh series just keeps getting better and better with its gripping tales of love, power, passion, and adventure.”

The battle has been joined...

Hardened warrior Simon de Burgh has no use for women and their wiles until he's waylaid by one. Now he plans to best the wench who dared capture him—and his heart.

Bethia Burnel leads a band of outlaws, striking from the fastness of the forest at the tyrant who holds her father prisoner. Although she knows how to deal with those who trespass in her woods, this arrogant knight threatens her very existence—and her heart.

But all's fair in love and war.

Simon de Burgh was looking for a fight.

Although he would have denied it, Simon deliberately took the forest road, as if daring brigands to attack his train. He was bored, and routing a band of ruffians—should they be foolish enough to attempt a raid—would remedy that complaint.

When he had taken on this errand for his brother Dunstan, it had promised an escape from the peace of his father’s hall. But after endless uneventful days on the road, Simon was restless. Although his destination, Baddersly Castle, lay not far ahead, the prospect of overseeing his brother’s lands like some glorified steward held little appeal.

All his life Simon had felt in competition with his six siblings, especially the elder Dunstan, who had served King Edward in Wales and had been rewarded with a demesne. Although the driving need to prove himself had eased in the past two years as he took on more responsibilities, Simon still felt impatient for challenges, for something he was missing.

And whatever he needed would not be satisfied by a foray into the woods, he thought as his destrier moved under the huge elms. The men behind him fell quiet, and for a while the only sound was the creaking of leather and mail and the tramp of hooves over packed ground.

His brothers would not have chosen the forest road. In fact, Simon could almost hear sensible Geoffrey reminding him that he did not have a large train, just a small group of horsed guards. Did he intend to be so reckless with their lives? The warning, like a prick from his conscience, soured his mood, and he spurred his mount onward.

But it was too late to regret his course, for in the shadowy darkness in front of him, Simon could see the shape of a huge tree lying across the roadway. Knowing that its placement was no accident, he suspected that his hoped-for fight was at hand. Silently, he raised a hand in the air as warning to those who followed. Then he reached for his sword.

“Hold and state your purpose here.” The voice rose in challenge from behind the wide trunk, and Simon wished he could trade one of his knights for a good archer. He watched through narrowed eyes as the speaker rose to stand on the fallen wood.

A rogue, indeed, the fellow sported a dark brown tunic and braies so as to blend in with his surroundings. He brandished no weapon, but stood with his legs spread apart and his hands on his hips in a cocky manner that made Simon grit his teeth. He wore a small sword and some sort of shortened mail, no doubt stolen from a fallen knight, Simon thought, and the knowledge infuriated him.

“Move, knave, for I answer not to you,” Simon called out.

“State your name, your allegiance, and your business in these woods,” the ruffian responded. He appeared to be no more than a lad, and a foolish one at that, Simon thought. For unless the forest hid scores of men better equipped than this shabby fellow, he could hardly hope to prevail against hardened warriors.

“I am Simon de Burgh, loyal to my father, the Earl of Campion, and my brother, Baron of Wessex, and my purpose is none of your concern. Do not make the mistake of challenging me. Now begone or be killed.”

“Nay! It is you who has made a mistake in coming here, Lord de Burgh, if that truly is your name. Lay down your weapons, for you are surrounded!”

Simon rasped out a laugh at the absurd order, couched in fair speech for a brigand. “And by what are we surrounded, beyond yon leaves?” he asked. Even if the youth had a host of  fellows behind him, they could do little against armed and mounted men. Surely, this brash boy must see the folly of his challenge and be on his way.

“Greenery, yes, my lord, and archers, as well,” the youth said. His claim was followed by a rustling and low murmurs among the men in the train. With a scowl, Simon glanced upward and saw several rogues poised high in the branches like birds, arrows at the ready. Archers? How had ordinary outlaws become so well trained and well organized? Simon gritted his teeth, for he could almost hear Geoffrey’s rebuke for endangering his men needlessly.

“Lay down your arms,” the youth repeated with a boldness that infuriated Simon. He was not accustomed to taking orders from anyone, let alone some brash bit of brigand. Arrows be damned! He was not going to surrender without a fight. Lifting his sword, he let out a mighty roar and sent his horse forward, intent upon separating the braggart’s head from his body. Here, at last, was the battle he had been seeking and, along with his rage, Simon felt the familiar surge of excitement, like no other, that came with the clash of weapons.

Dimly he heard the echoing war cries of those behind him as he leaned forward, eager for blood, but his sword arced in the empty air as the boy leapt out of the way. Before he could charge again, Simon felt a blow to his back. It was so sudden and forceful as to knock him from his mount, and he hit the ground hard, his sword struck from his hand and his breath buffeted from his body. Dizzy and dazed, he nevertheless rolled to a crouch, shaking off the man who had landed upon him with a heave and a grunt.

Arrows were flying, but he could see the youth shouting orders to his fellows from behind the relative safety of the fallen oak, and the boy’s cowardice enraged Simon further. Uncoiling from his low stance, he launched himself at the slim form, sending it sprawling into the dirt behind the tree.

“Get off me!” The braggart’s voice rose to a high pitch with his panic, and Simon knew a moment’s satisfaction before he felt the prick of a blade at his throat. It might have given another man pause, but Simon had never been known for his cool head.

With a roar of outrage, he dashed the dagger aside, ignoring the pain as it sliced through his skin on its way to the earth. When it landed out of reach, he grabbed his opponent’s neck, eager to choke the life from him. The boy wiggled like a fish out of water, thrashing wildly, and Simon grunted as a knee connected with his groin.

Doubled over in pain, Simon nevertheless managed to keep hold of the youth, and, vowing to give one better than he got, he reached for the fellow’s bullocks. A quick squeeze would have the lad singing in an even higher voice. But it was Simon who gasped when his fingers found nothing but empty braies. Baffled, he tightened his grip only to feel the smooth contours of a woman’s body against his palm.

“Knave!” his opponent whispered heatedly. Startled, Simon lifted his head, but before he could get a good look at the strange creature in his grasp, he felt the sharp impact of a stone above his ear. He blinked once in astonishment as the boy’s features faded into those of a woman, and then the world went black even as he ground out a protest.