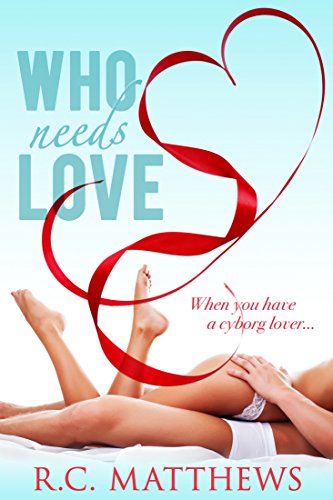 R.C. Matthews
Follow
My cyborgs are a galactic sensation. Everyone wants one except me. Am I too late to win my assistant's love?
Genres: Science Fiction FantasyErotic & Steamy Romance
Buy now
Available in:
Keywords: science fictioncyborgscientist
Share

My cyborgs are a galactic sensation. Human relations are out. Cyborg lovers are in. Everyone wants one ... except me.

I'm Natalie Naughty—Sexy Scientist Extraordinaire—and I delivered the man and woman of your dreams. Jack and Jackie are smoking hot, naked, and programmed to please. I would know because I tested them myself from February through December.

But now all I can think about is the feel of my computer programmer's lips on mine under the mistletoe. The caress of his hands against my exposed skin. The warmth of his body permeating the thin silk of my dress. What is he feeling? Thinking? Wishing? Dreaming? I have no idea. Mark Matters is human. I can't program his thoughts. Or make him say the words I want to hear. And that's sexy as hell.

I want him all for myself. But am I too late?

I’d really done it this time! Natalie Naughty – sexy scientist extraordinaire. That’s what they would call me after my latest invention became a galactic sensation. But before I shared the exciting news, I needed to perform a series of tests. Being a sex scientist definitely had its benefits.

Jack lay perfectly still on the table before me. His features stood out against the black surface and his skin felt as smooth as the epoxy resin on which he rested. I’d had the table made especially for him in order to accommodate his height. Damned expensive! But it was well worth it.

He was stunning from head to toe. Broad shoulders. Smooth chest. Taut abs. Large hands. And a mouth-watering penis tucked between his muscular thighs. My panties dampened as I imagined the thick head thrusting in and out of me. The slight curve of his cock was ingenious—sure to stroke my G-spot and elicit a screaming orgasm… every... single… fucking… time.

Licking my lips, I glanced over at my assistant. Mark Matters folded his arms and leaned casually back against the counter across from me. A smirk tugged slightly at the corner of his sensuous lips. “Damn shame if you ask me. Poor Jack. If he could talk right now, he’d beg you for a bigger dick. Go big or go home! You’re a cruel master, Natalie. Why not twelve inches?”

“Seriously?” Lifting my brow, I stared at him and sighed. Men. They were clueless when it came to pleasuring women. “Because the average vagina is three to four inches long. If aroused properly—and that’s a big if where most men are concerned—the vagina expands to twice that length.”

“And your point is?”

“You may dream of having a foot long dick,” I said, planting my hands firmly on my hips to refrain from smacking him upside the head, “but most women don’t dream of being impaled. Twelve inches hurts. You’ve single-handedly proven why I decided to invent Jack.”

He pushed off the counter and sauntered around the table until he stood directly behind me, caging me in with his hands braced against the table. The warmth of his body permeated my thin lab coat and silk dress as he pressed his chest against my back. Warm breath caressed my neck as he whispered, “It only hurts if the man is an asshole. Let me prove my point. Tonight. My place. You and me.”

Did he ever give up? After more than a handful of rejections, I would’ve expected him to move on. Testosterone must run as thick as oil through his veins. I twirled around in his embrace, wrapping my arms around his neck. Perhaps I was taking advantage of the situation, but I wasn’t completely immune to his charms. Mark could be downright sexy—sometimes. And I was in a flirty mood…warming up for my first meeting with Jack.

“Are you claiming to have twelve full inches?” I asked, pursing my lips. “For that, if you show me yours, I might consider showing you mine.”

“Maybe not twelve,” he said with a wink. “But more than seven. That’s for damned sure. You don’t need a toy, Natalie. You need a real man. Flesh and blood.”

I snorted at his lame attempt to lure me into his bed. “Been there…done that…”

“He can if you did your job right,” I said, arching one questioning brow as I lifted my hand palm up. “Well? Give me the chip. The moment of truth has arrived.”

“Please don’t do this—” He closed his eyes and let his head fall back. A deep breath exhaled from his body.

“Why not?” I tugged on his lab coat until he gazed down at me. “Are you afraid for the future of mankind?”

“The chip is that good?”

He placed it in my hand with a sigh. “Yes. I’m fucking amazing at everything I do—which is why you need to come home with me. Let me give you the ride of your life. And change your mind before you destroy the world with your unrealistic expectations. Men already measure up woefully short. If you unleash Jack, it’s game over.”

“Oh, my God.” Tingling sensations ran up and down my spine at his declaration. “You figured out voice activated control, didn’t you?”

Twining my fingers through his hair, I pulled his lips down to mine for a hard kiss. Euphoria cursed through my veins and I felt higher than a kite on a windy spring day. This was going to be the best fucking Valentine’s Day EVER!

Mark pulled me closer and the kiss softened as he parted my lips gently with his tongue. Silky. Soft. Smooth. Masterful strokes of his tongue sent shivers racing through me. He promised to be a skillful lover, but nothing could compare to my cyborg. How would Jack’s tongue feel vibrating across my skin or lapping away at my clit? I mean, seriously, a tongue that vibrates?

Somewhere in the back of my mind I knew I shouldn’t let Mark kiss me this way. I was his boss. But he was a genius and I wanted to celebrate. Besides, this was my last farewell to all human males. We sucked face until his hands began a stealthy exploration of my backside and his cock hardened against my belly, sending warning bells ringing in my ears. Whoa! Definitely more than seven inches down there.

“Thank you for the chip,” I said, pulling back and dragging in a lungful of air.

He panted as he gazed at me with passion blazing in his crystal blue eyes. His rich auburn locks were tousled from my fingers and I was forced to admit how adorable he looked. Cute and frustrated. Because tonight I had a date with Jack. Who wanted cute when they could have smoking hot? Thick black hair and mesmerizing violet eyes; that’s what awaited me once I put the final touches on my cyborg.

Prancing around the edge of the table, I leaned down and searched for the tiny latch behind Jack’s right ear. “I owe you big time, Mark.”

A chuckle bubbled up my chest and I ventured a glance at him. He smiled and waggled his brows.

“Not happening…” The latch sprung open and I carefully placed the chip in the small compartment. “I’m your boss; it might be viewed as sexual harassment.”

Laughing out loud, I shook my head and trotted over to the computer. “Nice try. But you know…and I know…that no one else pays as handsomely as I do.”

My fingers flew across the keys, entering in the secret code that would unlock the program housing Jack’s personality. The essence of the perfect man I had created. Years of research were about to be unleashed in a living…breathing…cyborg. My cyborg lover—Jack.

Just as I was about to press enter, Mark grabbed hold of my hand.

“You can still turn back—” His finger crooked under my chin and forced my face towards his. He wore an expression that was dead serious. “You’re sure this is what you want?”

Tilting my head, I glanced at my future lying on the table and nodded. “Without a doubt.”

He pressed enter and we both sprinted over to meet Jack.