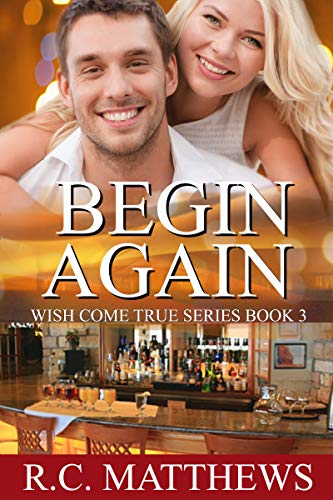 What started as a silly joke may end up a defining moment in her love life.

When Tyler Johnson spends the evening at a bar celebrating her cousin's pseudo bachelorette party, she boldly takes on a bet. A note on a napkin, placed provocatively in their waiter's back pocket, and two minutes later he's calling Tyler's cell phone asking her for a date. Bet won! It was all in good fun. So when things start to heat up on their first date, she suddenly has cold feet. He works at a strip club and picks up babes on a regular basis. No thanks.

That is until college resumes in the fall and Mr. Hottieshares her English class and turns out to be everything she has ever wanted in a boyfriend...but can't have now...because she judged the book by its cover. Unless she can convince Chase Bronson to begin again.

Begin Again is the flirty third book in the completed Wish Come True romantic comedy series. If you love smoking-hot attraction and snappy dialogue, you'll want to grab your copy today and indulge in a few hours of fun!

Sex on the Beach

“I highly recommend sex on the beach,” I said, maintaining eye contact with Tyler. When her brow rose, the corner of my mouth twitched slightly, but I kept a straight face. “It’s one of my favorites.”

“Really?” Her eyes traveled the length of my bare chest, down to where the rise of my jeans hung below my belly button, and back up again to meet my steady gaze.

Her eyes crinkled as a smile crept over her face and she glanced away, probably in an attempt to hide the hot flush suffusing her cheeks. Something told me she wasn’t accustomed to open flirting, which made me oddly happy.

“I’ll take your word for it,” she said. “Bring a round of sex for everyone, please.”

Leaning in, I reached to clear the empty glasses from the table, bringing my chest within inches of her bare shoulder. My stomach clenched as I got a whiff of her sweet scent before she leaned out of the way to give me space. And for the first time since working at Dirty Dick’s, I wished she would lean in closer to me.

Flirting with customers in my line of business was a terrible idea. Dating them was even worse. Because two types of women frequented a male entertainment club: cougars and cheaters. Neither was desirable. Both sought the same end game—an easy lay. And believe me, there were plenty of guys on stage and working the tables who welcomed the opportunity.

But not me. When I was young and raging with hormones, my dad had pulled me aside for the talk. According to him, any self-respecting guy didn’t stick his wood into everything walking on two legs—or his penis might fall off. He reinforced his message with a medical book full with pictures of venereal diseases.

His method was effective. By the time I was old enough to realize a condom could protect me against contracting herpes, gonorrhea or HPV, it was too late. The disgust was already deeply rooted.

Even if I wasn’t turned off by the idea of finding miniature crabs crawling through my pubic hair, I still wouldn’t jump in the sack with every woman who made a pass at me. Just knowing my own mother frequented establishments like this one was a total turn off. So I’d rather vomit for twenty-four hours straight than hook-up with a customer.

“Hey, Nathan,” I said, leaning against the padded leather bar. “Give me a round of drinks for table seven—sex on the beach.”

Staring transfixed at something across the room, the bartender’s eyes suddenly widened and then he cracked up in laughter. I glanced over my shoulder to find the grandmother from table seven shimming her hips to the music along with one of the stage dancers before placing a dollar in his G-string. Bryan was eating it up as usual. Young. Old. Skinny. Plump. Blond. Brunette. It didn’t matter. As long as the lady was ogling him, he was a happy man.

“Crazy table tonight, eh?” Nathan asked as he lined up the glasses along the bar and began adding peach schnapps.

“They’re just having fun; a bachelorette party. Those girls are way more into each other than the scene on the stage or around them. Looks like a close knit group.”

Nathan snorted and reached for the vodka. “That’s a refreshing change.”

“True dat.” I nodded as Nathan added cranberry, orange and pineapple juice to the glasses, along with alcohol. He plopped a maraschino cherry in each drink and slid an orange slice over the edges for a garnish. Within a minute the tray was loaded with seven drinks.

My arms and stomach muscles flexed under the weight of the tray, but I carried it with ease. Years of playing football paid off in more ways than one. Most times I didn’t put much thought into how my body looked—unless I was trying to attract someone from the opposite sex. And I found myself undeniably attracted to the cute little blond in the group at table seven.

She couldn’t be more than 5’ 3”. Maybe her size gave her the appearance of innocence despite the sexy red halter top she wore. And though she flirted back, it was only in response to what I initiated. Besides, she was nowhere near old enough to be a cougar. If I had to guess, she couldn’t be more than twenty years old, which would make her right about my age.

Setting the tray down on the red marble table, I leaned in and spoke just loud enough for her to hear. “Ready for some mind-blowing sex?”

She laughed and slapped me on the arm. “You’re so naughty.”

“That’s really too bad…” She snaked her hand around my butt and placed a tip into my back pocket. Her whiskey colored eyes sparkled with mirth. “But understandable. Hook-ups must be an occupational hazard.”

Okay. She wasn’t quite as innocent as I thought, because her hand on my ass sent blood racing through my veins. I normally wouldn’t tolerate such a bold gesture from one of my customers, however this time I had opened the door to our flirting. Thank God.

A soft chuckle passed my lips, and I smiled down at her. “Something like that.”

“Here, Grannie.” Taking a glass from the tray, she handed it to the older woman seated at her left.

“You ladies enjoying your evening?” I asked, passing out another two drinks.

Grannie sipped the fruity drink and nodded. “We’re having a fabulous time! Ooohhh. This is lovely. What’s in it?”

I listed off the ingredients as she drew another long sip and sighed in pleasure.

Tyler choked on her drink. A patch of red trailed up my neck and into my face, but I met Grannie’s direct stare and politely answered her question.

“Would you believe it’s called sex on the beach?” I asked with a huge grin spreading over my face.

She squealed with laughter and gave me the thumbs up. “That’s perfect.”

“Enjoy ladies,” I said, carrying the tray to the other side of the table to hand out the remainder of the drinks.

As I was about to leave, the tall red-head pulled me aside. Try as I might, I couldn’t recall her name. It didn’t stick in my brain—not like Tyler’s had. My memory sucked donkey balls…which was bad for business. Her teeth gnashed against her bottom lip for a few moments before she took a deep breath.

“Could I ask for an odd favor, Chase?”

My brows rose in unison as I contemplated her restless stance. “Guess it depends on what you want.”

“Well”—she glanced back at the table of ladies—“you know this is a bachelorette party, right?”

“Yep.” I hugged the empty tray to my chest. “The cock balloons are a dead giveaway.”

“Right.” She laughed and rested her hands on her hips. “So Jordan, as the bachelorette, is allowed to dare each of us to do one thing. If we successfully complete the dare then she has to drink a shot of whiskey.”

“Sounds interesting.” What in God’s name did this have to do with me?

“Jordan bet that I couldn’t find a guy here who’d be willing to give me the lint from his belly.”

A deep laugh burst out of my chest. These ladies were a riot. Where did they come up with this shit? At least it was better than the last group. They had finagled a pair of underwear from one of the waiters.

I peered at my belly button and a small smile lifted the corner of my mouth. “Sorry—lint free belly.”

She giggled and covered her mouth for a moment. “But could you ask around for me? Maybe the bartender? He’s fully clothed.”

“Sure.” I tucked my free hand into the pocket of my jeans. “Nathan will help you out if he can. Let me see what I can do.”

“Thanks!” The relief in her eyes spoke volumes. “Can you bring a few more shots of whiskey too? Jordan’s going to need them.”

Nathan roared with laughter at my request and rubbed his hand along his chin. “I don’t usually like to encourage ladies at these bachelorette parties, but this group is special. I’ve been watching them all night and you’re right. None of them seem interested in what’s going on around them. Other than the grandmother, they’ve pretty much kept to themselves.”

“That was probably a bet too.”

Nathan snorted and then grabbed a few shot glasses, filling all but one with whiskey. He worked the buttons on his shirt. A glow of triumph lighted in his eyes when he fished out a wad of lint and tossed it into the empty shot glass.

After loading my tray again, I chucked him on the shoulder. “You’re a good man, Nathan.”

A mischievous grin played on my lips as I sauntered over to table seven and held the tray before the red-head. “Compliments of the bartender.”

She peered at the shot glasses and busted out laughing. “Thanks, Chase. Hey, Tyler has a request for you too.”

I pursed my lips and walked over to the perky blond, stretching my hand out for the folded napkin she held poised in front of her. Curiosity raged through me. She shook her head and motioned with her finger for me to turn around. When I complied, she deposited the napkin into my back pocket. Then the little minx smacked me on the ass—as if to send me off on my way.

The women cheered at her antics. My shoulders shook with laughter as I strode towards another table to take their drink order. Flirting was, without question, an occupational hazard. But in the case of my little Blondie—I simply couldn’t resist.