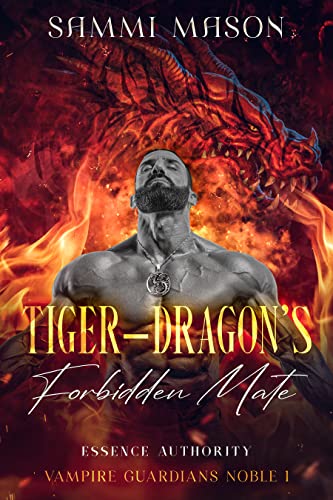 Lacey:
I'm a throwaway—unwanted and unloved. I believed Tank was different; he wasn't. I’ve ignored his command to stay away, and I’m back, for good.

Tank:
Tank's life has been shot to hell twice. The first was over a decade ago when his baby brother brought his best friend home. A vulnerable girl nearly twenty years younger than him, with a potently captivating charm. The second time, only a few weeks before, he was turned into an alpha vampire, with a mysterious inner voice demanding he shift.
When Tank finds Lacey waiting for him, he can no longer ignore the emotions he still considers shameful. Can Tank open his heart before Lacey’s clandestine past catches up to her and her young son?

The first book in the new Essence Authority Series: Vampire Guardians Noble and set in the same world as my Rock Falls series. With characters making appearances in both series.

Love slow burn, age gap with a secret baby that's full of intrigue, mystery and magic, then this is the book for you.

Please note due to the use of profanity, sexual content and scenes/situations some people may find offensive or distressing, this book is intended for mature, over 18 readers only.
Read more

I sit on the bench, waiting for Tank to run past; I’m the last person he’ll want to see, so he may not even stop. The clawing behind my ribs, which has been with me my entire life, is outdoing itself, reaching the very pit of my stomach. Even the short, sharp breaths that normally help have little effect. I wonder what Tank will be like now; a lot has changed.

Noble Security has grown, rescuing people all over the world and putting criminals behind bars. Locally they’re superstars, not that any of them take any notice or advantage. Tank instilled his sense of honor into them all.

I picture him running towards me to alleviate the clawing, which might work if I knew what to expect. The last time I saw him, no one even knew about people with supernatural abilities called essences or the Essence Authority. Now it’s common knowledge. Essences range from shifters to those with magical abilities, all made possible by kismet, which we’re told is magic from the Ancient Founders, I’ve never been clear on what they are though. The Essence Authority is a global organization in charge of everything essence, which now includes Tank.

A few weeks ago, he and everyone who works for him, including Blaze and I-Do, were turned into vampires and given the ability to shift into animals. From what I’ve pieced together, a joint mission with the EA went very wrong, and the only way to defeat an unnatural evil was for them all to be turned into vampires. They were given blood from members of one of the EA’s elite military units so they wouldn’t suffer blood lust or weakness that new vampires are rumored to experience. Usually, vampires don’t get essence blood and are believed to suffer horribly for a long time. Science fiction has nothing on real life anymore. The old stories about vampires are all wrong. The biggest gossip is how similar everyone from Noble is now to what they were before being turned. They go out in the sun and aren’t scared of garlic or a cross. They’re even said to be warm like a living person. It’s the last thing anyone in our sleepy part of North Carolina believed would happen.

Even though some people avoid them, scared that newly turned vampires are a threat, their lives have barely changed. They all live in the same houses and use the same stores. The only visible difference is their eyes are now a bright blood red, apart from Tank’s, which are a deeper red. However, apparently, they’ll be able to mask this and make them look normal in time. They also need to consume human blood, and supplying it has become a lucrative industry in this small town. The process is the same as donating blood for medical purposes, and it’s then frozen and defrosted as needed. Although rumors that they’re meant to drink it fresh are increasing.

There are stories about strange things they can do, new skills they’ve developed, including increased physical strength. Some people even claim they can feel the kismet when Tank is nearby.

Which makes my head spin.

I hoped my crush on Tank, the one I spent years denying, and the one that made him order me to stay away, will be gone; it blighted my time at their house. Each time I saw him, it grew. I tried to keep it secret, but I doubt I fooled anyone. In return, his suspicion of me only increased until he didn’t even look at me and then… Well, I’m not proud of what happened. I clasp my hands together and blame the cold early morning air for their shaking.

I haven’t seen Tank or anyone with the surname of Noble in nearly seven years, not since my eighteenth birthday. One day I was almost like a member of the family; the next, I’d stopped going around or returning their calls, and they let me, even Tyler. Not gonna lie—that hurt. I honestly thought they cared about me.

That was possibly the dumbest thing I’ve ever believed. I’m a throwaway, unwanted and unloved. Why would anyone care about me?

I sense Tank getting closer. He could deviate from his normal route and avoid me; somehow, I know he won’t. He’s too forthright and honest. He isn’t capable of anything underhanded, plus he’d see avoiding me as a weakness, something he would never allow himself. That’s probably why he’s now an EA alpha, a position of intense honor and unquestioned respect. Even by those of us who don’t have an essence.

Footsteps sound in the distance. Tank mastered the art of silent movement even before he was in the Marines, so this is my warning; he knows I’m here and is giving me the chance to go away. He doesn’t want to see me. My heart constricts further, leaving everything in me cold and uncomfortable, waves of nausea rise from my stomach. At this point, I just hope I have a voice when he gets here.

A traitorous part of me is looking forward to seeing him, eager to glimpse his handsome face, sinewy muscles and sculpted chest. I squelch it quickly; I can’t afford that vulnerability.

As nerves close around my throat and I feel my lungs burn, I wonder for the millionth time if coming here alone was the sensible thing to do, but I know I’m doing the right thing. Not that it matters. I’m not here for me, I made a promise to the person who is my everything. Then I remind myself this is Tank; he may be profoundly different, but he’ll still have the same innate integrity he always did and wouldn’t be capable of hurting me. Not physically anyway, newly turned vampire with an essence or not.

Although I’m not being fair to most people who have an essence, because they’ve always lived among us as our neighbors and friends, we just didn’t know they were something more than us. Wondering if the grumpy man behind you at the ATM—who’s moaning because your PIN won’t work—could shift into a wolf or tiger and literally eat you is scary. Of course, the news stories and hype have helped no one feel safe.

Recently a major publicity campaign has sought to show essence people in a better light, highlighting the injustices they’ve experienced and how horrendously some have suffered.

As Tank gets closer, everything else fades away, my pulse picks up and my body hums. I sense him at every level, right down to my soul. It’s almost as if we have a weird link.

Then he’s here, bigger, more intimidating and sexier than ever.