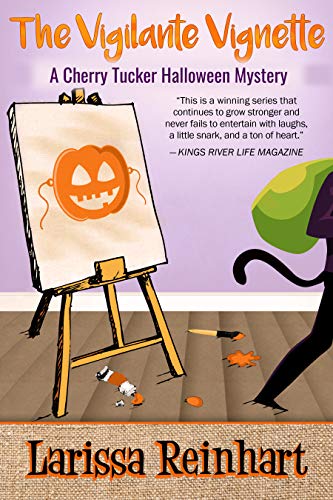 THIS HALLOWEEN CHERRY TUCKER'S GETTING MORE TRICKS THAN TREATS…
Who's robbing the rich men of Halo, Georgia? Catwoman's on the prowl and amateur sleuth Cherry Tucker's on the case. From Wall Street Journal bestselling mystery author, Larissa Reinhart, another country-fried novella in the sassy and Southern award-winning Cherry Tucker Cozy Mystery series.
"Readers who like a little small-town charm with their mysteries will enjoy Reinhart's series.” — Denise Swanson, New York Timesbestselling author of the Scumble River and Devereaux's Dime Store mysteries.

For portrait artist and amateur sleuth Cherry Tucker, celebrating Halloween usually means earning extra cash with her unique costumes. But when she makes a mercy call on a neighbor, she's roped into a quid pro quo deal: if Cherry recovers a family heirloom stolen at a party, the neighbor will use his clout to help her with some zoning issues. If she fails, the expression "someone's got her goat" will take on a whole new meaning.

While Cherry's on the case of the cat burglar, a mystery man is stalking her. It's hard to know who's the hero and who's the villain when everyone is wearing capes. And if Cherry doesn't figure it out soon, it won't just be Tater the goat who's homeless. If she's not careful, Cherry could lose her heart and her life in a madcap race for a priceless treasure.

“Cherry Tucker can get herself into the worst predicaments without even trying. Larissa Reinhart story is my favourite, full of mystery and superheroes! What more do we need at Halloween's night?” — Varietats

“This author knows how to make me laugh! Larissa Reinhart also knows how to flesh out her characters to a degree that I could swear I know them personally, from the two hunky men in Cherry's life to the mysterious, probably dangerous, but altogether lovable Eastern European ex-gangster (we presume). It was so much fun to read, I was really wishing it was longer.” — Riverlizzie Reviews

Other mystery series by Larissa Reinhart: