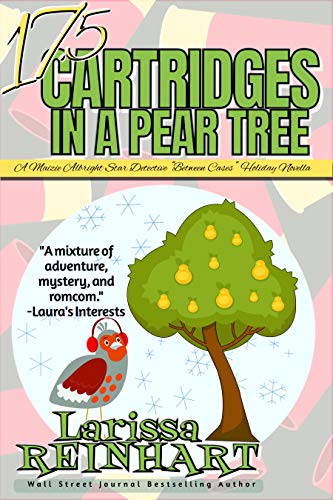 RING IN ANOTHER YEAR WITH THE “FRESH, FUNNY, AND FIESTY STAR DETECTIVE”

“The mystery and detective cases drive the story, but Larissa Reinhart’s characters steal the show every time.” — The Girl with Book Lungs

This New Year’s Eve, Maizie Albright’s happy to leave aside her Hollywood alde lang syne for the sake of a new life with family and friends in Black Pine, Georgia. There are so many reasons to celebrate. A new home with her father’s family Her new career as an assistant private investigator to hunky Wyatt Nash. A new love life with hunky Wyatt Nash…

However, a new career and home mean responsibilities. Like getting called in on a case on New Year’s Eve day. And babysitting Remi, her half-sister (and possibly half-Tasmanian devil) while her dad's out of town. What’s a private investigator in training to do? Make New Year’s Eve day “take your sister to work day.”

But when a woman arrives at Nash Security Solutions, asking about an old movie prop Maizie had given to her father, her New Year’s Eve gets crazier than Times Square at midnight. Before champagne toasts and the Big Peach drops, Maizie has twelve hours to reprise her most detested role to protect her family from old acquaintances best forgot and never brought to mind. Will these ruthless villains pop Maizie’s cork before the clock strikes twelve? Or worse yet, drop the ball on her sister?

For a fun and wacky holiday adventure, catch up with Maizie and Nash and download 17.5 Cartridges today!
Maizie Albright Star Detective Series

"Chapter headings with hilarious hashtags are just one of the indicators of the snarky humor in store for readers, especially when combined with movie fandom that is the embodiment of 'fanatic.' This novella bridging events of the novels heralds in the New Year by taking Maizie and Nash Security Solutions in a new direction, promising even more adventures in cinematic and real-world detecting." ~Cynthia Chow, Kings River Life Magazine

"As always, the characters are great and the plot includes a bit of humor as well as tension. What a way to start the New Year." ~author Christa Nardi, Christa Reads and Writes

"This might be my absolute favorite cozy series and this book has everything I love about Maizie and her world -- the chemistry between her and Nash, her dangerous little half-sister and the pack of small dogs that constantly follow her into trouble, and lots of fast-paced adventure." ~Michelle Marr, Michelle's Romantic Tangle