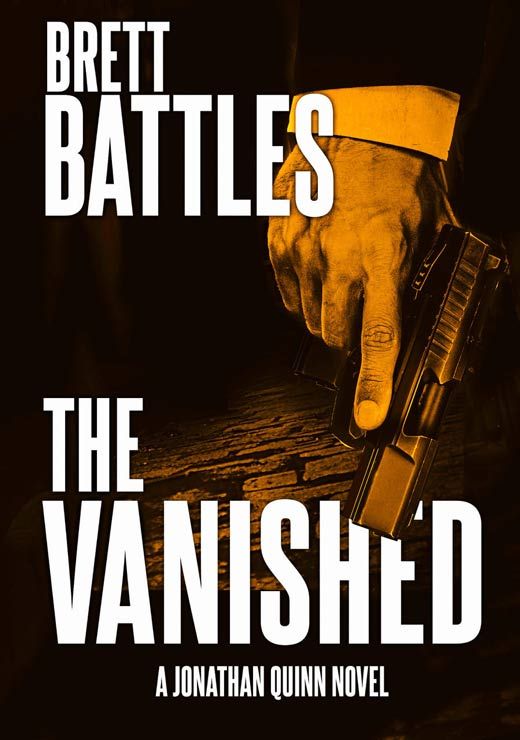 “The best word I can use to describe Battles's writing is addictive.”

A missing physicist. Two botched jobs. And a world gone mad. Will this be Jonathan Quinn’s last job ever?

It’s been nine years since Quinn last worked with Mariko Hirahara. That fateful job left him with a permanent sense of guilt, and her with a life forever changed.

Now, their paths have crossed again. Not in a way Quinn would have hoped for, but at least in one that might allow him to make partial amends. To accomplish this, he will have to risk his career by ignoring the strict orders he’s been given.

“Mariko Hirahara,” she said, holding out her hand.

As they shook, she eyed him critically. “You’re shorter than I expected.”

“Sorry to disappoint.” Unless he’d shrunken since the last time he checked, he topped out just under six feet.

“You haven’t today, either.”

“That’s what the best legends would say.”

“Can we change the subject?”

Her gaze still assessing, she said, “We could discuss the weather.”

“How about the job?”

“If we must.” She backed out of the way and let him into the hotel suite, then looked past him. “Where’s the rest of your team?”

“Settling in. I thought you and I would have a chat first.”

Orlando and Nate were two floors above, monitoring Quinn and Mariko’s conversation via the microphone hidden under the lapel of his jacket.

Mariko’s suite was identical to the one Quinn and Orlando had checked into—a large, comfortable living room designed to take advantage of the floor-to-ceiling windows; and presumably a well-apportioned bedroom behind the closed double doors to the right.

Mariko motioned him to the sofa and walked over to the bar. “Something to drink?” She opened the mini fridge. “For beers, I’ve got Asahi and Tiger. Wine—chardonnay and pinot noir. There’s also Coca-Cola and, um—”

She carried a water and an orange juice for herself to where he stood waiting by the couch, handed him the Evian, and they both sat.

“Cheers,” she said, tilting the juice bottle toward him.

“How was your trip?” she asked.

“You arrived this morning?”

He set the Evian on the coffee table. “We did.”

“Were you able to get something to eat?”

Peter, head of the Office and the one who had assigned the job to Quinn, had been stingy on the job’s details. Quinn was told the agent on site—Mariko Hirahara—would fill him in after he, Orlando, and Nate arrived in Tokyo.

But Mariko seemed hesitant to do so.

“There’s a ramen place a couple of blocks away,” she said. “It’s one of the best in town. I can give you directions if you’re interested. It gets crowded but it’s worth the wait.”

He smiled and nodded but said nothing.

“Or if you prefer something else, I can give you the names of several good restaurants within a couple of subway stops.”

“Have you been here before? Tokyo, I mean,” she said.

“Oh. Then you probably already have your favorites.”

“A few, but it never hurts to try someplace new.”

He gave her a brief, perfunctory smile.

Her gaze drifted off, focusing on nothing for several seconds before her eyes lit up. “If you’re still here next weekend, there’s a festival at the—”

“Right.” She nodded. “Right, right.” Twice she tried to say something more, and twice she stopped herself. On her third go, she said, “What has Peter told you?”

“That we’d have at least one but possibly two removal situations. And that you would brief us on the rest.”

“One,” she said quickly. “There will only be one body.”

“Did he mention anything else?”

“Only that it’s to be a permanent disappearance.”

Quinn was a professional cleaner, an operative whose specialty was the disposal of unwanted bodies. In general terms, depending on a client’s needs, he provided three levels of service: 1) leave the body somewhere it could be found, but in a state that disguised the actual cause of death; 2) stick the body in a location where someone might stumble upon it but not too soon; and 3) make the body disappear forever. Of these three, the latter made up the bulk of Quinn and his team’s work.

“When and where will we be needed?”

“Thursday night,” she said. It was currently Tuesday. “The where is still TBD.”

“How long until you know?”

Not the ideal situation. It was always easier if Quinn and his associates had time to scope out the mission site ahead of an operation. But this would be far from the first job where a pre-op scout was not an option.

“Do you at least have some possibilities?”

She tilted her head, wincing slightly. “I can give you a list, but I can’t guarantee any of them will be it.”

“You can’t coordinate things with him?”

Quinn looked out the window at the sprawling mass of Tokyo. The sky above the city was clear, but in the distance he could see a wall of clouds, dark and menacing. There would be rain tonight, the advance forces of a larger storm due in another day or two.

He returned his gaze to Mariko. “I’m not sure we can do this job for you.”

“To do our job properly, we need those we’re working with to be forthcoming.”

“Are you saying that I’m not?”

“I don’t…but…I am being forthcoming. I’ve been telling you about the job, haven’t I?”

He stood up. “I’m sorry. You’ll have to find someone else.”

“But Peter sent you! You can’t just say no.”

“I can, and I am. You’re holding something back, and whatever that is could put my life and the lives of my team members in unnecessary danger. I won’t allow that. Thank you for the water. I can show myself out.”

He didn’t even make it halfway across the room before she said, “Hold on.”

He paused and glanced back.

“You’re right,” she said, her controlled expression replaced by…fear? Desperation? “I’m…I’m sorry. I haven’t told you everything. Please.” She gestured for him to retake his seat. “Give me another chance.”

He remained where he was, waiting.

She grimaced, as if she were fighting a battle with herself. “She has no idea that anything is going on.”

“That was interesting,” Orlando said after Quinn returned to their suite.

“Have you ever run into a situation like this before?”

“What are we going to do?” Orlando asked.

Quinn had left his meeting with Mariko without saying whether or not he and his team would stay on the job, only that he needed a little time and would get back to her.

“I wanted to hear your thoughts first,” he said.

While Nate was technically still Quinn’s apprentice, for all practical purposes he’d become more of a partner than a student. But when he said useless things like this, Quinn wondered if the kid would ever be able to work on his own.

“The job has risks,” Orlando said.

“Every job has risks,” Quinn countered.

“I mean different than the normal ones.”

He tilted his head in concession. “Does that mean you think we shouldn’t do it?”

“No. It means that if we do stay, we need to go in with our eyes wide open.”

Quinn looked at Nate. “Anything to add? I mean anything helpful?”

Nate, who’d been about to speak, closed his mouth again and shook his head.