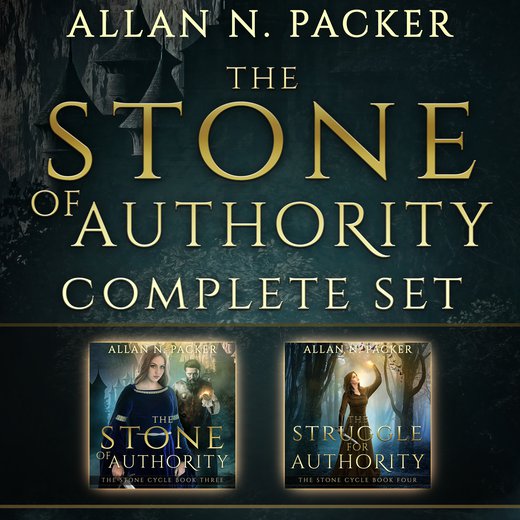 The Stone of Authority Complete Set

The epic fantasy saga of The Stone Cycle continues...

The Stone of Authority

The invasion is over, and the survivors of the shattered Rogandan army have straggled home. The people of Arvenon and the surrounding kingdoms are at peace. Or so they believe.

Little do they know that a new stone of power has emerged, controlled by a cruel tyrant bent on destruction. But King Agon of Rogand lusts after much more than conquest. He will settle for nothing less than unending power.

No armies are massing at the border. The kingdoms face a threat from within.

As chaos spreads, Will, Steffan, Essanda, and Arvenon’s other key defenders are each confronted with crisis. If any one of them stumbles, the kingdom will fall.

The Struggle for Authority

Arvenon is controlled by a traitor. The kingdom of Castel teeters on the brink. With the unseen hand of King Agon of Rogand pulling the strings, a mantle of oppression is slowly settling over the four kingdoms.

Now recovered from the assassination attempt, King Steffan of Arvenon sets out to wrest back control of his kingdom, vigorously supported by Will, Rufe, Thomas, and their allies. Unlikely influences might ultimately tip the balance.

In a desperate attempt to block Agon, Will and Thomas set out for Rogand. What each of them encounters there will shake them to the core. The fate of four kingdoms will hinge upon the Stone of Authority.

If you enjoy epic fantasy with gripping action, relatable characters, and clean romance in a sweeping coming of age saga, then try The Stone of Authority Complete Set now!