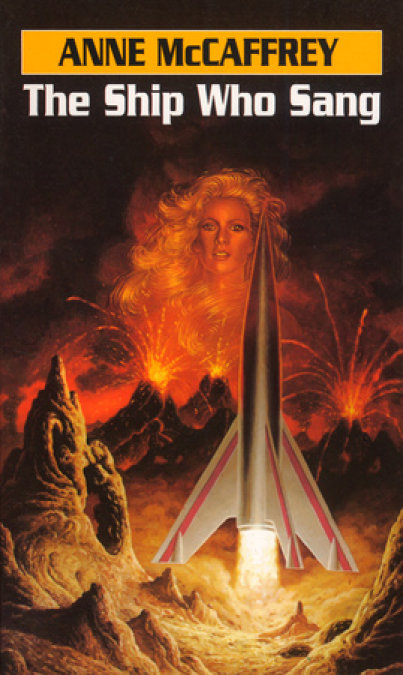 Helva had been born human, but only her brain had been saved—saved to be schooled, programmed, and implanted into the sleek titanium body of an intergalactic scout ship. But first she had to choose a human partner—male or female—to share her exhilirating excapades in space!

Her life was to be rich and rewarding . . . resplendent with daring adventures and endless excitement, beyond the wildest dreams of mere mortals.

Gifted with the voice of an angel and being virtually indestructable, Helva XH-834 antipitated a sublime immortality.

Then one day she fell in love!

SHE WAS BORN a thing and as such would be condemned if she failed to pass the encephalograph test required of all newborn babies. There was always the possibility that though the limbs were twisted, the mind was not, that though the ears would hear only dimly, the eyes see vaguely, the mind behind them was receptive and alert.

The electro-encephalogram was entirely favorable, unexpectedly so, and the news was brought to the waiting, grieving parents. There was the final, harsh decision: to give their child euthanasia or permit it to become an encapsulated “brain,” a guiding mechanism in any one of a number of curious professions. As such, their offspring would suffer no pain, live a comfortable existence in a metal shell for several centuries, performing unusual service to Central Worlds.

She lived and was given a name, Helva. For her first 3 vegetable months she waved her crabbed claws, kicked weakly with her clubbed feet and enjoyed the usual routine of the infant. She was not alone, for there were three other such children in the big city’s special nursery. Soon they all were removed to Central Laboratory School, where their delicate transformation began.

One of the babies died in the initial transferral, but of Helva’s ‘class,’ 17 thrived in the metal shells. Instead of kicking feet, Helva’s neural responses started her wheels; instead of grabbing with hands, she manipulated mechanical extensions. As she matured, more and more neural synapses would be adjusted to operate other mechanisms that went into the maintenance and running of a space ship. For Helva was destined to be the “brain” half of a scout ship, partnered with a man or a woman, whichever she chose, as the mobile half. She would be among the elite of her kind. Her initial intelligence tests registered above normal and her adaptation index was unusually high. As long as her development within her shell lived up to expectations, and there were no side-effects from the pituitary tinkering, Helva would live a rewarding, rich and unusual life, a far cry from what she would have faced as an ordinary, “normal” being.

However, no diagram of her brain patterns, no early I.Q. tests recorded certain essential facts about Helva that Central must eventually learn. They would have to bide their official time and see, trusting that the massive doses of shell-psychology would suffice her, too, as the necessary bulwark against her unusual confinement and the pressures of her profession. A ship run by a human brain could not run rogue or insane with the power and resources Central had to build into their scout ships. Brain ships were, of course, long past the experimental stages. Most babies survived the perfected techniques of pituitary manipulation that kept their bodies small, eliminating the necessity of transfers from smaller to larger shells. And very, very few were lost when the final connection was made to the control panels of ship or industrial combine. Shell-people resembled mature dwarfs in size whatever their natal deformities were, but the well-oriented brain would not have changed places with the most perfect body in the Universe.

So, for happy years, Helva scooted around in her shell with her classmates, playing such games as Stall, Power-Seek, studying her lessons in trajectory, propulsion techniques, computation, logistics, mental hygiene, basic alien psychology, philology, space history, law, traffic, codes: all the et ceteras that eventually became compounded into a reasoning, logical, informed citizen. Not so obvious to her, but of more importance to her teachers, Helva ingested the precepts of her conditioning as easily as she absorbed her nutrient fluid. She would one day be grateful to the patient drone of the subconscious-level instruction.

Helva’s civilization was not without busy, do-good associations, exploring possible inhumanities to terrestrial as well as extraterrestrial citizens. One such group—Society for the Preservation of the Rights of Intelligent Minorities——got all incensed over shelled “children” when Helva was just turning 14. When they were forced to, Central Worlds shrugged its shoulders, arranged a tour of the Laboratory Schools and set the tour off to a big start by showing the members case histories, complete with photographs. Very few committees ever looked past the first few photos. Most of their original objections about “shells” were overridden by the relief that these hideous (to them) bodies were mercifully concealed.

Helva’s class was doing fine arts, a selective subject in her crowded program. She had activated one of her microscopic tools which she would later use for minute repairs to various parts of her control panel. Her subject was large—a copy of the Last Supper —and her canvas, small—the head of a tiny screw. She had tuned her sight to the proper degree. As she worked she absentmindedly crooned, producing a curious sound. Shell-people used their own vocal chords and diaphragms, but sound issued through microphones rather than mouths. Helva’s hum, then, had a curious vibrancy, a warm, dulcet quality even in its aimless chromatic wanderings.

“Why, what a lovely voice you have,” said one of the female visitors.

Helva “looked” up and caught a fascinating panorama of regular, dirty craters on a flaky pink surface. Her hum became a gurgle of surprise. She instinctively regulated her “sight” until the skin lost its cratered look and the pores assumed normal proportions.

“Yes, we have quite a few years of voice training, madam,” remarked Helva calmly. “Vocal peculiarities often become excessively irritating during prolonged intrastellar distances and must be eliminated. I enjoyed my lessons.”

Although this was the first time that Helva had seen unshelled people, she took this experience calmly. Any other reaction would have been reported instantly.

“I meant that you have a nice singing voice…dear,” the lady said.

“Thank you. Would you like to see my work?” Helva asked, politely. She instinctively sheered away from personal discussions, but she filed the comment away for further meditation.

“I am currently reproducing the Last Supper on the head of a screw.”

Helva turned her vision back to magnification and surveyed her copy critically.

“Of course, some of my color values do not match the old Master’s and the perspective is faulty, but I believe it to be a fair copy.”

“The lady’s eyes, unmagnified, bugged out.

“Oh, I forget,” and Helva’s voice was really contrite. If she could have blushed, she would have. “You people don’t have adjustable vision.”

The monitor of this discourse grinned with pride and amusement as Helva’s tone indicated pity for the unfortunate.

“Here, this will help,” said Helva, substituting a magnifying device in one extension and holding it over the picture.

In a kind of shock, the ladies and gentlemen of the committee bent to observe the incredibly copied and brilliantly executed Last Supper on the head of a screw.

“Well,” remarked one gentleman who had been forced to accompany his wife, “the good Lord can eat where angels fear to tread.”

“Are you referring, sir,” asked Helva politely, “to the Dark Age discussions of the number of angels who could stand on the head of a pin?”

“If you substitute ‘atom’ for ‘angel,’ the problem is not insoluble, given the metallic content of the pin in question.”

“Which you are programmed to compute?”

“Did they remember to program a sense of humor, as well, young lady?”

“We are directed to develop a sense of proportion, sir, which contributes the same effect.”

The good man chortled appreciatively and decided the trip was worth his time.

If the investigation committee spent months digesting the thoughtful food served them at the Laboratory School, they left Helva with a morsel as well.

“Singing” as applicable to herself required research. She had, of course, been exposed to and enjoyed a music appreciation course that had included the better known classical works such as “Tristan und Isolde,” “Candide,” “Oklahoma,” and “Le Nozze di Figaro,” along with the atomic age singers, Birgit Nilsson, Bob Dylan, and Geraldine Todd, as well as the curious rhythmic progressions of the Venusians, Capellan visual chromatics, the sonic concerti of the Altairians and Reticulan croons. But “singing” for any shell-person posed considerable technical difficulties. Shell-people were schooled to examine every aspect of a problem or situation before making a prognosis. Balanced properly between optimism and practicality, the nondefeatist attitude of the shell-people led them to extricate themselves, their ships, and personnel from bizarre situations. Therefore, to Helva, the problem that she couldn’t open her mouth to sing, among other restrictions, did not bother her. She would work out a method, bypassing her limitations, whereby she could sing.

She approached the problem by investigating the methods of sound reproduction through the centuries, human and instrumental. Her own sound production equipment was essentially more instrumental than vocal. Breath control and the proper enunciation of vowel sounds within the oral cavity appeared to require the most development and practice. Shell-people did not, strictly speaking, breathe. For their purposes, oxygen and other gases were not drawn from the surrounding atmosphere through the medium of lungs but sustained artificially by solution in their shells. After experimentation, Helva discovered that she could manipulate her diaphragmic unit to sustain tone. By relaxing the throat muscles and expanding the oral cavity well into the frontal sinuses, she could direct the vowel sounds into the most felicitous position for proper reproduction through her throat microphone. She compared the results with tape recordings of modern singers and was not unpleased, although her own tapes had a peculiar quality about them, not at all unharmonious, merely unique. Acquiring a repertoire from the Laboratory library was no problem to one trained to perfect recall. She found herself able to sing any role and any song which struck her fancy. It would not have occurred to her that it was curious for a female to sing bass, baritone, tenor, mezzo, soprano, and coloratura as she pleased. It was, to Helva, only a matter of the correct reproduction and diaphragmic control required by the music attempted.