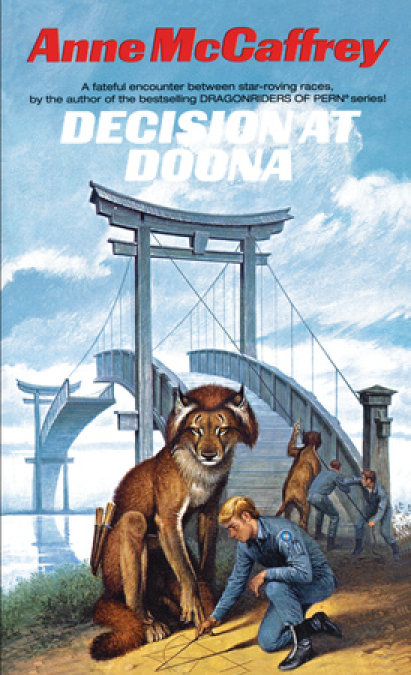 A fateful encounter between star-roving races by the author of the bestselling Dragonriders of Pern series!

After the first human contact with the Siwannese, that entire race committed mass suicide. So the Terran government made a law—no further contact would be allowed with sentient creatures anywhere in the galaxy. Therefore Doona could be colonized only if an official survey established that the planet was both habitable and uninhabited.

But Spaceship had made a mistake—Doona was inhabited. Now the colonists' choice was limited. Leave Doona and return to the teeming hell of an overpopulated Terra. Or kill the catlike Hrrubans. Or learn, for the first time in history, how to coexist with an alien race.

THE PLANET RECEDED to a small, blue-green sphere, the lesser of its two satellites beginning to pass across the retreating face of its primary, a pearly tear in the northeast hemisphere. The film ended with such abruptness that there was a pause before the viewers reacted with the customary throat-clearing and chair-shuffling.

The First Speaker motioned for silence and bowed courteously toward the Senior Scout whose inner apprehension defied his attempts to suppress it.

“Thank you, Senior Scout, for such an effective visual presentation,” the First Speaker began blandly. “The planet is, as you have reported, a pastoral jewel.”

“Exactly!” And the Third Speaker rose to his feet, turning slightly to First but not waiting for permission to address the group. “Exactly. A pastoral jewel and utterly useless since its mineral and metal deposits are too negligible to warrant the high cost of extraction. We’d do much better working on that turbulent volcanic planet in Sector—” he glanced at his notes, “9A-23. It’s far more important for us to increase our stores of the rare elements so abundant there than to mess around with pastoral jewels.”

The Senior Scout and the Chief of Extraterritorial Explorations exchanged quick, concerned glances, but when the Chief leaned forward to their sponsor, the Second Speaker, he received a barely perceptible nod of reassurance.

“I believe Fourth has information relevant to 9A-23 and its exploitation,” First suggested.

The Fourth Speaker rose, shrugging his robe into place over his shoulder.

“There is, unfortunately, no possibility of opening 9A-23 to an exploitation venture.” He gave a wry grimace. “There have been no applicants for the courses required to train personnel for the complicated mining procedures necessary to such a closed unit project.”

“I find that hard to believe,” Third muttered indignantly.

Fourth swiveled slightly toward Third, his attitude mildly rebuking him for his aside.

“In fact, there have been very few applications for any training courses in recent years except…”

“We’ll go into your report in detail in a few minutes, Fourth,” the First Speaker broke in smoothly. “However, Fourth merely underscores one of the many reasons why we are here to consider the opening of that lovely pastoral planet to colonization.”

“I fail to see how opening that useless planet to colonization can help us get trained personnel to man a mining operation on 9A-23.”

“With your kind permission?” said First, his irony so uncharacteristic that Third subsided instantly, looking chagrined. “This lovely place, graciously endowed with clean, fresh air, land, water, lakes, streams, fields, mountains, deserts, abounding with all manner of wild life, yet none sentient enough to violate our Prime Rule, vast stretches of uninhabited space—” and he caught the involuntary shudder that seized the Third Speaker. “A planet so close to what our home world once was as to be its twin is perfect as a retraining ground.”

Undaunted, the Third Speaker rose to his feet, his eyes round, his visage reflecting distaste and concern.

“Good sir, a hundred years ago the Ruar System proposal was overwhelmingly rejected by 87% of the voting adults. You cannot be proposing to revive that old wheeze about a return to the simple, pure, primitive life. Why, who’d put up with such deprivations?”

The Senior Scout wondered if he could control himself.

“A hundred years ago,” the First Speaker answered gently, “our suicide rate among young adults was not what it is today, nor had the last major continental mass of our fourth planet been dormitized, destroying the remaining natural land; the sea harvests were still adequate for our population’s basic subsistence diet. Today we are faced with so grave a crisis that I fear for the future of the race itself. In our search for freedom from want and to remedy the inequalities of opportunity by the suppression of physical competition on all levels, we have literally destroyed initiative, ambition and vitality. The once vigorous hunter has become the enervated observer.

“Fourth Speaker will shortly give us his report but let me repeat the most distressing statistic: in the generation now approaching maturity, only one half of one per cent have indicated interest—oh, nothing as decisive or binding as actually applying; just an interest—in training for technical or administrative careers. I need not tell you that this falls disastrously below even the minimum requirements for the replacement of essential personnel.

“We have become a people so passive, so pacifist, so detached and unemotionally involved that even the effort to propagate our species has become too great.”

The Fifth Speaker for Public Health and Medicine nodded gravely, his fingernails unconsciously tapping on his own distressing report.

“The Computers predict that, unless we immediately—” and First paused to impress on each of the Seven Speakers the gravity of his pronouncement, “immediately begin to reverse this effect, our civilization will collapse of its own dead weight within three generations. Therefore,” and the First Speaker rose to his feet, “I, as First Speaker, have already chosen family units to settle on this lovely new world, to begin an intensive re-education, stressing those racial characteristics which allowed our ancestors to conquer space and…”

“To hunt and kill?” breathed the Third Speaker in a horrified whisper.

“To hunt, yes. And to kill, yes, for food,” the First Speaker agreed in a gentle, reasonable tone, “with as primitive a weapon as is effective. There are no sentients on this planet, Third Speaker, no creatures of any great intelligence or sensitivity. It is, as you saw from the films, ecologically balanced on the kill-or-be-killed natural order. Yet, even if we were forced now—on some other planet—to consider the destiny of another rising species, I trust that we have come far enough along evolution’s scale by now to remember the terrible lessons of past errors and to profit by them. Indeed,” and his smile was grim, “we have almost come too far along that scale for the perpetuation of our own race. Therefore, as the truly rational intelligent beings we profess to be, let us discuss this necessity from all angles. I cannot, of course, presume to override anyone’s honest beliefs and principles. Fifth Speaker, you have comments relevant to this crisis, do you not?”

With a haste inconsonant with the dignity of his office and his years, the Fifth Speaker rose and, in a voice hoarse with distress, gave his devastating report. He did not try to gloss over the frightening rise of suicide deaths, including the irrational waves of mass, masochistic self-destruction; a crushing apathy in some strata balanced by insensate violence in others; the decreasing birth rate in the higher intelligence percentiles; a disproportionate increase of mental retardation in the lower brackets; an overall picture of racial decay and indifference.

The Fourth Speaker was asked to report more fully on Education. The good gentleman glanced down at his thick report for a moment, then let it fall from his hands to the table.

“The statistics are here. First Speaker has already acquainted you with the essential one: one half of one per cent of the maturing generation indicates—not applied for, has indicated only—interest in further training. When there is no incentive to learn anything, why bother? With the performance records presently in hand in elementary levels, there is really no point in my speaking at all. Soon there will be no teachers left to teach those who do not wish to learn anyhow.”

He shrugged and sat down, his chin sinking to his chest in an attitude of disconsolate defeat.

The Sixth Speaker stood, clearing his throat, trying to dispel the gloom cast by the Fourth.

Halfway through his own report on production and manufacturing he, too, stopped and his report slapped quietly back to the table.

“There’s no point in my going on either. Perhaps I’m fortunate in that most of my department’s operations are automatic, so personnel training is not presently a problem. It will be. And soon.”

The Third Speaker glared around at his peers, unable to catch anyone’s eye, until he reached the Second Speaker.

“And I suppose that you, too, are going to hang your head with still more disgraceful mouthings of inefficiency and indifference.”

“On the contrary,” Second replied, looking first to his left for the Prime Speaker’s permission. “My Department attracts trainees constantly. Of course, we have to reject many of them due to physical unfitness. Others are disappointed because, unfortunately, the appropriation for Exploration and Defense falls woefully behind its needs. Consequently, we get the best of our vital young men and women. If Sixth is agreeable, I believe I can put it to the Corps to volunteer to man the mining colony proposed for 9A-23, until such time as other personnel can be found and trained.”

There was something about the way Second made his helpful proposal that irritated Third far more than First’s rejection of the 9A-23 priority over the pastoral planet The reports, so devastatingly pessimistic, must be exaggerations of actual fact. Moreover, the whole thing smacked of collusion. He intended to check the printouts in the Computer. However, before he had a chance to gather his arguments, the First Speaker was taking a vote on colonizing his pet project. The Third Speaker naturally felt obliged to abstain from voting and was then forced to suppress his horrified indignation when the other six Speakers voted in its favor.