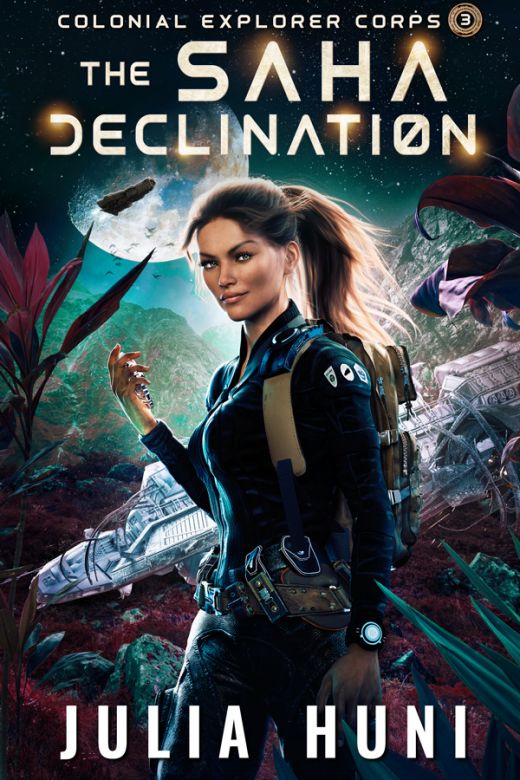 Siti Kassis excelled at the Academy, earning honors and respect. She has one last cadet mission before she graduates, but it should be easy. She'll be the most junior member of an established Explorer Corps team landing on a partially explored planet. With decades of experience and the full support of the corps, what could go wrong?

Dangerous aliens, sabotage from within, and a deadly enemy at the gates.

Siti must rely on her friends--and some of her enemies--to survive the final challenge.

The senior lounge at the Colonial Explorer Academy was a fixture on the potential cadet tour. The plush room—with comfortable seating, bar, vendo machines, Crud table, and virtual gaming corner—offered a glamorous counterpoint to the austere dorms and classrooms.

The tour guides liked to bring kids through when we were there and encouraged us to talk about our experiences at the Academy. We didn’t mind strutting our stuff and spinning war stories—as seniors we ran the whole place. Or so we pretended.

This day was different. The entire senior class had crammed into the lounge at the behest of our commandant, Admiral Nathanier Kassis.

We knew what was coming—we’d seen it twice before but always from the other side of the door. The seniors would enter in nervous silence and exit either elated or disappointed, depending on what had been announced. Today was Placement Day for the Senior Tour.

Aneh Jones, my roommate and best friend, perched on the extreme edge of our couch, her leg bouncing in quick time.

On her far side, Chymm Leonardi di Zorytevsky shut down whatever program he was tweaking on his holo-ring and put a hand on her knee. “Stop. You’re bouncing the whole sofa. Shaking the room apart isn’t going to make this happen any faster.”

Joss Torres leaned over the back of the couch and put his big hands on Aneh’s shoulders, pulling her against the thick padding. “Chymm is right. Settle.”

“Easy for you to say.” Aneh craned her head around to look up at our big friend. “You’re the pride of Earth. You’re sure to get a good slot. I’m a nobody from Grissom.”

“You’ve got the top grades from our class,” I said. “They’re going to send you to an amazing research opportunity. It would be a huge waste to do anything else.”

Across the room, Felicity Myers and Derek Lee huddled in a corner, talking and glaring daggers at the rest of us. Since our plebe summer, they’d been virtual outcasts. Their own flight, Delta Black, liked them but mainly because they both had credits to spend. The rest of us ignored them whenever we could and tolerated them when required. None of us thought they’d last this long, but apparently their legacy stubbornness ran strong.

“I wonder where Peter is,” Aneh said for what had to be the tenth time.

“He’s with the commandant,” Joss, Chymm, and I said together.

The door swung open. “Attention!” We all leaped to our feet.

Commandant Kassis strode to the front of the room, followed by the three squadron advisors and the cadet unit commander—Peter Russell.

“At ease,” Dad said, and we relaxed a fraction. “Take your seats.” Chair legs scraped the floor as we settled quietly—all of us sitting on the edge of our seats now.

“As you know, my team and I have been reviewing your records and assigning you for the Senior Tour. You will be assigned to an active stage 2 mission. Each mission will have multiple cadets and will last three weeks. Mission commanders have reviewed your records and agreed to accept you. Your performance and behavior will be constantly evaluated and reported back to us. Do not sully the Academy’s reputation. When you return, if—and only if—your SenTo commander signs off, you’ll be commissioned.”

He turned to scan the room, seeming to take stock of each cadet. “Assignments have been posted to the senior board and will be released when I leave the room. Do you have any questions?”

For a brief second, Dad’s eyes met mine. I straightened my spine and nodded. I wouldn’t let him down. The corner of his mouth twitched in the barest of smiles, and he looked away.

Dad and I hadn’t always had a good relationship. Before I started at the Academy, I’d been…I believe my “uncle,” Tam Origani, referred to me as “high maintenance.” Coming from a CEC officer, that was the worst of insults. I hadn’t realized that until I’d started here. My maintenance levels had decreased dramatically.

Felicity stood in her corner, back ramrod straight. “What if our mission commander doesn’t like us?”

Snorts of laughter went around the room. No one liked Felicity, so that was a good question.

His lips thinned. “Active duty officers know better than to let their personal feelings endanger the mission. If your commander doesn’t like you, that will have no bearing on their evaluation. These missions have been selected because we trust the judgment of the officers in charge.”

Captain Fortescue took a step forward. “But it’s a good idea to make yourself likeable.”

Felicity lifted her chin. “I am likeable.”

Sounds of disbelief rippled through the crowd.

Dad held up a hand. “Then there won’t be a problem. Any other questions?”

“You have the room.” Dad turned smartly on his heel and marched to the door, the three captains following.

We all popped to our feet, frozen for the interminable seconds required for four officers to walk through the door.

Every holo-ring in the room flicked to life as we searched for our names on the SenTo assignment list.

We’d read the stage 1 reports from all five planets currently under exploration. Brahe, a young planet with heavy volcanic action but mineral riches that demanded exploration. Goryu, a pastoral planet that would be an excellent agricultural colony if proven safe. Auzout and Harawi, both older, more stable worlds, were excellent locations to support high tech manufacturing, if they were colonized. And Qureshi, the least likely to be approved for colonization. Although the initial tests showed a stable environment that would respond well to terrraforming, it was low on valuable minerals and slightly below the optimum temperature range. Its proximity to Gagarin made it a likely military base.

Voices whooped around me as the lucky cadets found the most coveted assignments next to their names.

I scrolled down the board, past Abdul, Argawal, Franklin, Jones, not stopping to check my flight mates’ assignments. There it was: Kassis, Serenity. Assigned to Qureshi.

Anna yelped softly. “I’m going to Harawi! Part of the geographical assessment team.” Anna had developed an interest in geology and geography after our exercise on Sarvo Six. “The possibilities on Harawi are amazing. Did you know they’ve detected traces of both senidium and platinum? And the rock formations in the northern hemisphere—”

I tuned her out. She’s my best friend, but when she starts yammering about rocks, I find it difficult to keep my eyes open.

Joss, still standing behind Anna, caught my eye and snorted a laugh. “Siti, where are you going?”

I put on a bright smile. “Qureshi.” I scrolled through my orders. “My team will be doing a broad analysis of the southeastern quadrant of the planet. They think it might be a good location for a military base. What about you?”

He grinned, stretched the file in his palm, and highlighted his name. “I’m going to Qureshi, too.”

A wave of relief washed over me. The chances that at least one of my flight mates would be on the same mission was high—there were forty-eight seniors and only five planets. But since they assigned us based on our field of study, it wasn’t random. “It says there’ll be ten of us, but that doesn’t mean we’ll be working together. I think they spread the cadets out to—” I pushed my hands out.

I pointed at him. “That. Where are you going?”

We all nodded. Sending Chymm to a world destined for manufacturing made the most sense. Once we graduated, he expected to spend most of his career in a lab, but we all had to do the SenTo on a stage 2 team. It was supposed to foster leadership skills, or make us well-rounded, or something like that. It was also the only time some officers would spend in the field.

“Attention!” Peter’s voice echoed through our implants. We snapped to. “Command is releasing us for the rest of the day to prepare for our SenTo assignments. You can stay here longer or go about your business. Dismissed!”

As cadets filtered out the door, comparing assignments with their friends, Peter waded through the crush to our little island. “Where’s everyone going?”

As the others shouted out their assignments, I watched Felicity and Lee cross the room. A little eddy of empty space surrounded them. Felicity noticed me watching and gave me her patented legacy glare. Lee murmured something, then arrowed away, making straight for me.

“I see we’re going to Qureshi together, Kassis.”

Perfect. My spirits dropped even further. Crappy planet and crappy company. It would be just my luck if Lee and I were assigned to the same location.

“Joss and I are going there, too.” Peter winked at me. “Just like old times.”

“Without the Hellions, I hope,” Joss put in.

Lee ignored them. “I guess your dad thinks we’ll be a good team.”

“Or he trusts me to keep an eye on you.”

“That works both ways.”

“Yeah, watching Siti’s back is our job.” Joss punched Lee lightly on the arm. Lee staggered. The rest of my flight closed in around me, facing off against the Delta Black cadet. Lee muttered under his breath as stalked away.

I smirked at Joss. “Cuts both ways, Earth boy. I’ve pulled you out of trouble more times than I can remember. Come on, Blue.”