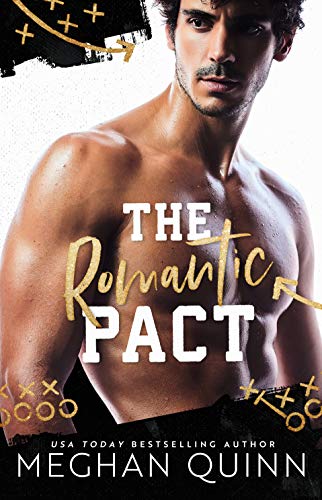 Meghan Quinn Founding author
Follow
1
We made a pact growing up, never to get romantic with each other, never fall in love. I'm about to break it.
Genres: SportsNew Adult RomanceFriends to loversRomanceContemporary Romance
Buy now
Available in:

I haven't seen her in three years.I haven't talked to her since the kiss.So why am I on a plane, flying across the world to spend a week with her in Germany?One word: Pops.My life’s a mess.My possible football career is hanging on by a thread.I'm driving the roads of Germany in honor of Pops with the one girl I can never have.And I’m sharing a bed with her, the girl I've measured everyone else up to, while desperately trying to not to touch her.We made a pact growing up, never to get romantic with each other - never fall in love.And I'm about to break that pact. For good.

Reader says this book is...: entertaining story (1) happily ever after (1)

See those three boys over there?

Yeah, the kings of football?

The ones with their heads in their hands, nursing their second beers of the night and trying to figure out what the hell happened to their season?

That’s right. These All-Americans became the biggest upset in college football and a complete embarrassment to their town.

Can it really be that bad?

No, not just annihilated, but completely and utterly destroyed.

They won three games all season.

Interceptions. Dropped balls. Missed blocks. Fumbles. You name it, they did it.

First, there’s Crew Smith, the protective one. Once an NFL hopeful, he now holds the record for the most interceptions thrown in a season by a quarterback.

Next, is Hollis Hudson, the mysterious tight end who keeps everything locked down. He couldn’t run a route this year to save his life.

And to round out the trifecta of crap, there’s River Tate, the popular frat boy. He’s supposed to be a superstar wide receiver but dropped more passes than he caught this season.

Guys wanted to be them.

But at this point, no one would want to touch them with a ten-foot pole.

The truth is, they’ve screwed up their NFL aspirations.

There are three stories to be told . . .