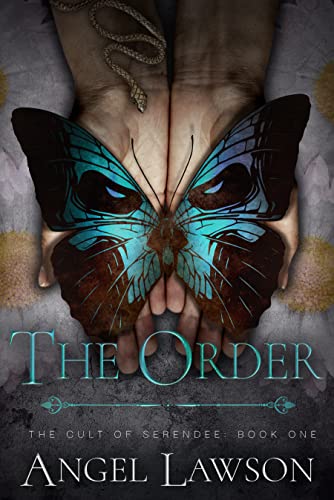 Book 1: The Cult of Serendee
Angel Lawson Founding author
Follow
When your cult controls what you eat, when you sleep, and who you marry... What happens if you disobey?
Genres: GothicRomance
Buy now
Available in:
Keywords: gothic romance

Sacrifices—that’s what females make to live in Serendee—an urban utopia. We give up our family, our choices, our bodies.

Some people call it a cult, but they don’t understand. We give it our all, and in return, Serendee gives back by providing a safe, idyllic home.

Starting with The Order.

I don’t expect the perfect mate, but when I’m matched with Rex—the rebellious, handsome, and destructive heir of Serendee, I’m stunned.

Until I find out why I’ve been chosen.

Rex doesn’t want me, but his father will do anything to keep his son in line, including having his three best friend’s train me to be the perfect mate, in and out of bed.

Elon, Silas, and Levi will test my beliefs, my faith, and every ounce of loyalty I have to Serendee.

What I don’t understand is that Rex’s goal is to break free.

But first, he’ll have to break me to make it happen.

The Order, book 1 of the Cult of Serendee is a contemporary, dark reverse harem romance, by USA Today and Amazon best selling author, Angel Lawson.

I’ve just stepped out of the building, canvas bag gripped in my hand. I cut my eyes to the guy speaking to me, while definitely not making eye contact. He leans against the wall—a friend next to him, scrolling on a device in his hand. They’re both in jeans and a T-shirt.

“Hiding under that frumpy skirt and sweater,” he continues from behind me. “It just makes us want to know what’s under there even more.”

My skin prickles at his insinuation. I also feel shame for being out on the street so late. I’d stayed late to help clean up after the meeting, volunteering to stay long after everyone else had left. That was foolish of me. Walking back and forth from my neighborhood to the strip of shops a few blocks away is normally not an issue, but with the University students back at school, the odds of running into someone that doesn’t understand our lifestyle is amplified.

“She’s one of those freaks, isn’t she?” a second voice says. I guess his friend decided to join in. “Do they make you wear those skirts?”

I push past a line of people waiting to get into a popular restaurant. There are outdoor tables and people milling around. Rock music blares from speakers and the chaos makes it a good place to slip away. A small part of me wants to call out to the patrons for help and ask them to make these guys go away, but I don’t.

First, we’re not supposed to talk to anyone outside of Serendee if we can help it. Second, I can see the judgment in their eyes. They think the same thing as the men following me; that I’m a freak. I cut through the crowd, ignoring the looks and stares about my long, braided hair and plain clothes. I’m used to it. I grew up this way—with the locals thinking that those of us that live in Serendee are different. We are different, that’s the whole point, but that doesn’t mean we’re freaks.

At the end of the building, I cut down the alley toward Serendee. The building is on one side of me and a short, picket fence on the other. My skirt swishes at my ankles and I use one hand to lift it high enough that I don’t trip. The iron gate of the community comes into sight and I exhale, the feeling of safety coming back over me.

A shadow steps out from behind the building. No, two. “Thought you could get away?” It’s the man that spoke to me first. I catch the scent of stale cigarettes on his clothes. “We just want to know more about you.”

He jerks his head in the direction of the community. “Know more about what you people do in there.”

“We don’t do anything,” I say defensively. Then press my teeth down on my tongue. A punishment. “Leave me alone.”

“She speaks!” The second guy says, eyes bright with amusement. “I heard you aren’t allowed to talk to men—or anyone really—outside your little cult. If you do, they’ll kick you out.”

“I heard they’re not allowed to watch TV or have the internet.”

Despite my will, my cheeks burn at his statement—at the scrutiny of my lifestyle. I take a deep breath and conjure up an image of Anex and his intelligent, kind, face. He warned us over and over about people like this. It’s why he stared Serendee in the first place.

“Nah, they only have sex with their hippie guru in charge.” His brown eyes sweep over me. “That’s what I heard.”

I grip the handle on my bag, and I blink back hot tears at the corners of my eyes. The books inside are at least eight pounds. I could crack a head if I swung it hard enough. A head. Not two. But I don’t want to do that. I just want to go home.

“Do you all have sex with him? I mean, isn’t that what cults are really always about? Sex?”

Again, I don’t answer, but that just encourages him more.

“You think you’re better than us, don’t you? With your weird outfits and innocent vibe.” He continues. I follow his hand as it drops to his belt. “What would happen to you if you weren’t so innocent? Would they kick you out?”

His hand lowers to his crotch, cupping his manhood. “Maybe a little taste of what it’s like out in the real world is exactly what you need.”

A true flicker of fear rolls in my belly. I’ve been harassed before. So many times. But never have I been trapped alone like this. “Please,” I finally say. “Please stop.”

The first guy grins. “Oh, I like the way that word sounds coming out of your mouth. Say it again.” His tongue darts out. “Beg me.”

A heartbeat. That’s how quickly things escalate. With a twisted smirk on his mouth, he closes the gap between us, and I act on instinct, rearing back, swinging the bag filled with books with all my strength. He blocks it easily, but I don’t wait around, darting toward the gate. If I can just get behind it, I know they won’t follow. I’m almost there when strong hands grab me by the shoulders. Fear drops into the pit of my stomach.

“I’m not going to hurt you,” the voice says harshly.

I’m spun around. I look up and it’s not one of the men in front of me. It’s someone else. A member of my community. I know him. His name is Elon.

Behind him there are others—three more men, dressed more casually than is typically allowed Serendee, but these men aren’t typical. Not at all. Two of them stand with clenched fists, easily separating my harassers. They’re broad shouldered and intimidating. It’s not a show, it’s a fact. Silas and Levi. My eyes flick to the last one, and the instant I see his pale hair and blue eyes, I suck in a breath.

“You dare speak to one of our women against her will?” Rex says, pushing up his sleeves. I can’t see his face in the dark shadows of the alley, but I do see the familiar mark inked on the inside of his forearm. “Threaten her?”

The man with the scuff snorts. “At least I think she has free will. What about you? You think she’s a possession, don’t you? A belonging.”

“Elon, get her out of here,” Rex snaps, not looking our way. “Take her home.”

Elon reaches around me and unlatches the gate. He doesn’t touch me, as that is forbidden, but he doesn’t need to. Everything about him is imposing, and I fear him almost as much as the men on the street. As I step through, the sound of flesh against flesh echoes in my ear. I glance back, looking around the man, and watch Rex punch the first guy and the other two quickly jump in.

“That is not for you to see,” Elon says, ushering me forward. Soon whatever is happening is behind us and we’re back in Serendee. Home.

Dark anger clouds his expression. “If you hadn’t been so foolish, you wouldn’t need to thank me. If it had been up to me, I would have left you out there with the vultures.”

“You should be home. Preparing for the ceremony tomorrow, not flaunting yourself to the men in town.”

“I wasn—” The dark flicker in his eyes cuts me short. I know that look—the accusation behind it.

“Are you like her?” he asks suddenly. “Is that why you were out there alone? Trying to run away, too?”

That I understand. ‘Her.’ I’m well aware of who he’s speaking about. It also means he knows exactly who I am.

“I was working late at The Center so that the others could leave early to prepare. For the ceremony tomorrow.” I lift my chin. “And I am nothing like her. Nothing.”

He studies me like he’s trying to assess if I’m telling the truth. I don’t know what he determines, but he heads down the road toward my domum. We walk in uncomfortable silence. Men, they are allowed in and out of the community with no consequence. And men like Elon have even more freedom. The women, because of our nature—our value—we follow more complicated rules. I didn’t exactly break them tonight, but it puts my motivations into question. My family’s history doesn’t afford much leeway.

I’m thankful when I see the building ahead. At the driveway, Elon pauses in the street, hands in his pockets, obviously waiting for me to make it safely inside. I’m still shaking as I take the path to the front door. A nagging question makes me stop.

“Why did he step in?” I ask. The ‘he’ is understood. A man like Rex shouldn’t even spare a glance in my direction.

I shake my head. Rex and his friends are an enigma to me. They’re different from the rest of the community. Chosen.