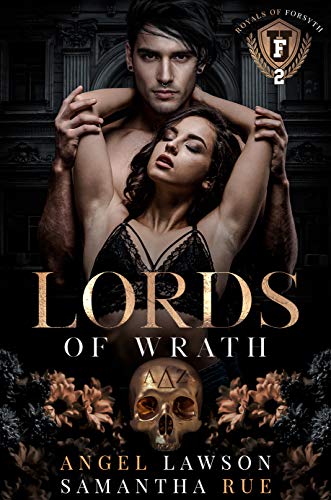 They hurt me, abuse me, use me…

I signed up for it. Literally. I agreed to the contract that made me the Lords’ Lady, a position that requires me to do whatever they want, but only as protection from someone worse. I agreed to be in their beds, on my knees, and punished should I disobey.

Killian is two-hundred-and-twenty pounds of muscle, brutal physicality, and pure spite. He thinks I don’t know that he watches me when I sleep.

Tristan is fair-haired and charming to anyone who doesn’t know better. To me, he’s the man who seeks to control me, with his cold eyes and possessiveness.

Rath is the dark-eyed tempest who took me into his bed. Even having been subjected to his barbed tongue, he’s the first man to ever make me feel safe.

I hadn’t realized how much they’ve worn me down and made me feel complacent, but it turns out they’ve messed with my head just as much as they abused my body. Despite the awful things they've done to me, they actually made me feel special. Cared for. Protected.

And then I found out it was all a lie.

The way Tristian cares, Killian’s vigilant eyes, and worst of all, my contented moments in Rath’s bed, were all part of a game.

A game to see who can use me best.

A game they’ve been playing since day one.

WARNING: This book is a DARK/BULLY romance. It contains graphic content of abuse and assault that some readers may be particularly sensitive to. If you have triggers or are even remotely unsure, please heed the note at the beginning of this book.

Lords of Pain
Lords of Wrath
Lords of Mercy

Content advisory: This book is a DARK/BULLY romance. It contains graphic content of abuse and assault that some readers may be particularly sensitive to. If you have triggers or are even remotely unsure, please heed the note at the beginning of this book.

The house is quiet when I get home from practice, walking in the door to complete silence. There’s no music coming from Rath’s hovel upstairs, probably because he’s still sulking. Not a sound from Tristian, either, who’s likely shut in his room plotting some kind of twisted, fucked up revenge on our enemies.

No skin off my back.

I don’t need to look to know Ms. Crane has already settled in for the night, but I’m starving badly enough to fend for myself. Practice kicked my ass from one end of the field to the other. With Homecoming two weeks away, Coach is worried we’ll get distracted from his goal of a perfect season, and with the way I was playing today, he’s right to be. I need to un-fuck myself, and fast.

I drop my stuff in the hallway just outside the kitchen. Dinner, I discover, is in the refrigerator, covered in plastic. She’s a pain in the ass, but that cranky old bitch isn’t a fool. She knows exactly how to work us and exactly what we need. I know when I go upstairs, I’m going to find my mattress stripped of the blood-stained sheets, like nothing ever happened. I doubt she even flinched at the sight, loyally cleaning up the crime. Knowing her, she probably whistled as she was doing it.

I place the plate on the counter and hear a small shift behind me. Glancing back, I see her. Story. My stepsister. The reason I was so drag-ass on the field today, getting drilled repeatedly. She’s standing in the doorway, arms loose at her sides, eyes shuttered. I know it’s probably all in my head, but as I look her over, I get this thought. She looks different now that she’s not a virgin. I still remember the sight of her beneath me, those plush lips falling open in equal parts shock and pain as I forced myself into her tight, virgin cunt.

No wonder I couldn’t focus today.

If I wasn’t thinking about how it felt to fuck her last night, then I was thinking about waking up to an empty bed, her dried blood still on my dick. She was gone, but the evidence all remained. A dirty reminder of what I took. What she owed me. How poetic.

“I can make that for you,” she says, stepping into the kitchen. I move aside, but monitor her, not so hungover on her pussy to think it changed anything between us. If anything, she probably hates me more. I wouldn’t put it past her to poison me. She opens the refrigerator and pulls out a beer, flipping off the top and sending the bottle cap through the air. I catch it deftly in my hand, watching as she places the bottle on the table. “Sit. I know you’re tired.”

There’s not an ounce of kindness in her tone. Just obligation. Fine by me. She knows full well that I fucked her because it had to happen. She wasn’t safe. The Counts and the Barons drew that line when they kidnapped her and tried to steal what belonged to us. But that wasn’t the only reason.

I won her. Won. Fair and fucking square. Even if she hadn’t chosen me personally—the true mark of victory—The Game’s score still would have still added up in my favor. I didn’t play it safe like Tristian and Rath, with their petty mind manipulations. I’ve owned her ass since the day she moved in here—longer than that, even. Since the day we met, years ago.

I watch as she presses the timer on the microwave, getting an eyeful of the cuff on her wrist that marks her as LDZ property. She pushes up on her toes to peer inside the door, giving me a pleasant view of the cotton shorts that barely cover her ass. She’s come a long way in the last few weeks. Less combative. More compliant. Look at that move, calmly choosing me as the winner last night. She didn’t even fight me when I laid her out on my crisp white sheets and finally claimed what’s always been mine.

“How was practice?” she asks, turning around.

I stare at her, wondering if she actually cares. “Hard.”

Of course she doesn’t.

“Ms. Crane wanted me to tell you your suit’s in your closet for the press conference this week.”

I nod and down the rest of my beer in one long, tense swallow. She passes me to go to the refrigerator, sending a wave of her scent across my face. All I can think about is being between her legs, the way she looked when she came, quivering around my cock, that little divot in her forehead as she cried out, like she felt so goddamn good but was really pissed off about it.

I reach down to adjust myself.

“Do you want another—”

“No.” I shoot her a glare just as the microwave beeps. Seeming unbothered by the curtness of my tone, she removes the plate and sets it in front of me. Like a servant. Like a Lady. Pulling in a hard lungful of her scent, I say, “The food is fine. You can go.”

I wonder if she still has my come inside of her.

She folds her hands, voice flat. “Are you sure? I don’t mind—”

I snap, “Go upstairs and get ready for bed.”

She pauses, eyes flicking to the clock on the stove. It’s only nine. “You…want me to go to bed?” That tone—uncertainty laced with disbelief—is the first actual glimpse of her I’ve seen since last night.

I stab my fork into the casserole and blow on it, calmly announcing, “You’ll be sleeping in my bed from now on.”

“But…” Her expression freezes, that mask she’s been trying to wear crumbling beneath the spark of alarm in her eyes. I watch as she tries to put it back together, smoothing out her features. “Can I ask why?”

“Because I told you so.” I shove the food in my mouth and chew slowly, already anticipating finding her there, curled up in my sheets, sound asleep. My dick’s been throbbing all day at the thought of it. “Be there in two hours. No later. And don’t go crying to the others about it. They already know.”

She wants to argue. I can hear it in the way she shifts her weight, like she’s bracing to push back. Instead, she turns on her heel and silently, obediently, leaves the room.

All of that was true.

Now she needs to understand what that means. Her virginity might be off the table, but she’s still under our rule—under my rule—and now that I’ve gotten a taste for her, I’m not letting go.