Salman Rushdie's most ambitious and accomplished novel, sure to be hailed as his masterpiece.

At the beginning of this stunning novel, Vina Apsara, a famous and much-loved singer, is caught up in a devastating earthquake and never seen again by human eyes. This is her story, and that of Ormus Cama, the lover who finds, loses, seeks, and again finds her, over and over, throughout his own extraordinary life in music. Their epic romance is narrated by Ormus's childhood friend and Vina's sometime lover, her "back-door man," the photographer Rai, whose astonishing voice, filled with stories, images, myths, anger, wisdom, humor, and love, is perhaps the book's true hero. Telling the story of Ormus and Vina, he finds that he is also revealing his own truths: his human failings, his immortal longings. He is a man caught up in the loves and quarrels of the age's goddesses and gods, but dares to have ambitions of his own. And lives to tell the tale.

Around these three, the uncertain world itself is beginning to tremble and break. Cracks and tears have begun to appear in the fabric of the real. There are glimpses of abysses below the surfaces of things. The Ground Beneath Her Feet is Salman Rushdie's most gripping novel and his boldest imaginative act, a vision of our shaken, mutating times, an engagement with the whole of what is and what might be, an account of the intimate, flawed encounter between the East and the West, a brilliant remaking of the myth of Orpheus, a novel of high (and low) comedy, high (and low) passions, high (and low) culture. It is a tale of love, death, and rock 'n' roll. 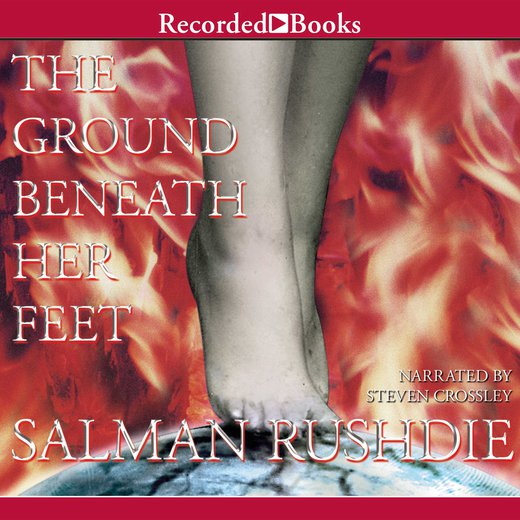 THE GROUND BENEATH HER FEET

1
THE KEEPER OF BEES
On St.Valentine's Day, 1989, the last day of her life, the legendary popular singer Vina Apsara woke sobbing from a dream of human sacrifice in which she had been the intended victim. Bare-torsoed men resembling the actor Christopher Plummer had been gripping her by the wrists and ankles. Her body was splayed out, naked and writhing, over a polished stone bearing the graven image of the snakebird Quetzalcoatl. The open mouth of the plumed serpent surrounded a dark hollow scooped out of the stone, and although her own mouth was stretched wide by her screams the only noise she could hear was the popping of flashbulbs; but before they could slit her throat, before her lifeblood could bubble into that terrible cup, she awoke at noon in the city of Guadalajara, Mexico, in an unfamiliar bed with a half-dead stranger by her side, a naked mestizo male in his early twenties, identified in the interminable press coverage that followed the catastrophe as Raúl Páramo, the playboy heir of a well-known local construction baron, one of whose corporations owned the hotel.
She had been perspiring heavily and the sodden bedsheets stank of the meaningless misery of the nocturnal encounter. Raúl Páramo wasunconscious, white-lipped, and his body was galvanized, every few moments, by spasms which Vina recognized as being identical to her own dream writhings. After a few moments he began to make frightful noises deep in his windpipe, as if someone were slitting his throat, as if his blood were flowing out through the scarlet smile of an invisible wound into a phantom goblet. Vina, panicking, leapt from the bed, snatched up her clothes, the leather pants and gold-sequinned bustier in which she had made her final exit, the night before, from the stage of the city's convention centre. Contemptuously, despairingly, she had surrendered herself to this nobody, this boy less than half her age, she had selected him more or less at random from the backstage throng, the lounge lizards, the slick, flower-bearing suitors, the industrial magnates, the aristotrash, the drug underlords, the tequila princes, all with limousines and champagne and cocaine and maybe even diamonds to bestow upon the evening's star.
The man had begun to introduce himself, to preen and fawn, but she didn't want to know his name or the size of his bank balance. She had picked him like a flower and now she wanted him between her teeth, she had ordered him like a take-home meal and now she alarmed him by the ferocity of her appetites, because she began to feast upon him the moment the door of the limo was closed, before the chauffeur had time to raise the partition that gave the passengers their privacy. Afterwards he, the chauffeur, spoke with reverence of her naked body, while the newspapermen plied him with tequila he whispered about her swarming and predatory nudity as if it were a miracle, who'd have thought she was way the wrong side of forty, I guess somebody upstairs wanted to keep her just the way she was. I would have done anything for such a woman, the chauffeur moaned, I would have driven at two hundred kilometres per hour for her if it were speed she wanted, I would have crashed into a concrete wall for her if it had been her desire to die.
Only when she lurched into the eleventh-floor corridor of the hotel, half dressed and confused, stumbling over the unclaimed newspapers, whose headlines about French nuclear tests in the Pacific and political unrest in the southern province of Chiapas smudged the bare soles of her feet with their shrieking ink, only then did she understand that the suite of rooms she had abandoned was her own, she hadslammed the door and didn't have the key, and it was lucky for her in that moment of vulnerability that the person she bumped into was me, Mr. Umeed Merchant, photographer, a.k.a. "Rai," her so to speak chum ever since the old days in Bombay and the only shutterbug within one thousand and one miles who would not dream of photographing her in such delicious and scandalous disarray, her whole self momentarily out of focus and worst of all looking her age, the only image-stealer who would never have stolen from her that frayed and hunted look, that bleary and unarguably bag-eyed helplessness, her tangled fountain of wiry dyed red hair quivering above her head in a woodpeckerish topknot, her lovely mouth trembling and uncertain, with the tiny fjords of the pitiless years deepening at the edges of her lips, the very archetype of the wild rock goddess halfway down the road to desolation and ruin. She had decided to become a redhead for this tour because at the age of forty-four she was making a new start, a solo career without Him, for the first time in years she was on the road without Ormus, so it wasn't really surprising that she was disoriented and off balance most of the time. And lonely. It has to be admitted. Public life or private life, makes no difference, that's the truth: when she wasn't with him, it didn't matter who she was with, she was always alone.
Disorientation: loss of the East. And of Ormus Cama, her sun.
And it wasn't just dumb luck, her bumping into me. I was always there for her. Always looking out for her, always waiting for her call. If she'd wanted it, there could have been dozens of us, hundreds, thousands. But I believe there was only me. And the last time she called for help, I couldn't give it, and she died. She ended in the middle of the story of her life, she was an unfinished song abandoned at the bridge, deprived of the right to follow her life's verses to their final, fulfilling rhyme.


I've never been invisible to the earth's little creatures, however. Those six-legged dwarf terrorists have got my number, no question about it. Show me (or, preferably, don't show me) an ant, lead me (don't lead me) to a wasp, a bee, a mosquito, a flea. It'll have me for breakfast; also for other, more substantial repasts. What's small and bites, bites me. So at a certain moment in the heart of the earthquake, as I photographed a lost child crying for her parents, I was stung, once, hard, as if by conscience, on the cheek, and as I jerked my face away from my camera I was just in time (thank you, I guess, to whatever horrible aguijón-wielding thing it was; not conscience, probably, but a snapper's sixth sense) to see the beginning of the tequila flood. The town's many giant storage vats had burst.
The streets were like whips, snaking and cracking. The Angel distillery was one of the first to succumb to this lashing. Old wood burst open, new metal buckled and split. The urinous river of tequila made its frothing way into the lanes of the town, the leading wave of the torrent overtook the fleeing populace and turned it head over heels, and such was the potency of the brew that those who swallowed mouthfuls of that angelic surf came up not only wet and gasping but drunk. The last time I saw Don Angel Cruz, he was scurrying in the tequila-drowning squares with a saucepan in his hand and two kettles on strings slung around his neck, trying pa