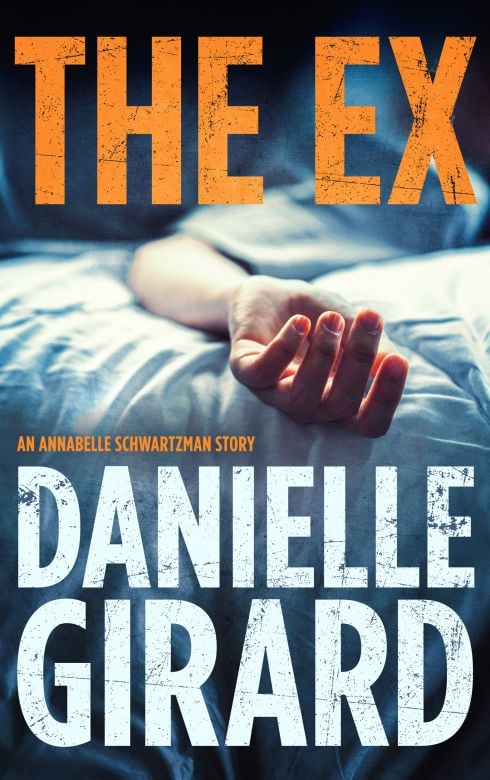 Seven years after making her escape from an abusive marriage, Dr. Annabelle Schwartzman is settling into her position as medical examiner in the city of San Francisco. Doing what she loves, she can almost put the trauma of her past behind her. Until she confronts the case of a young woman, sixteen weeks pregnant.

Everything about the case says the woman took her own life. As hard as Schwartzman tries to make peace with the evidence in her head, something about the case won’t leave her alone. She’s all too aware of how similar the circumstances are to her own past. After all, she, too, was once sixteen weeks pregnant…

Going beyond her role in the morgue, Schwartzman digs into the boyfriend’s past, determined to find the truth behind the woman’s death, a fate she knows could easily have been her own.

Wearing a sterile Tyvek suit over her slacks and short-sleeved blouse, Annabelle Schwartzman set her M.E. case beside the bed. Through the bedroom window, the setting sun cast an orange glow on two neighboring apartment buildings. A thick beam of sunlight highlighted the bedroom wall, exposing years of fingerprints and a constellation of tiny nail holes where pictures and art had once hung.

The apartment where Diane Reilly lived with her boyfriend was in a swanky area of San Francisco called Cow Hollow. Although small, the apartment was comfortable and appointed in the way of young couples in the city, some combination of Pottery Barn and Ikea. From the dust along the baseboards behind the bureau and the bedside table, Annabelle suspected the couple had lived here for some time. That was typical of people in San Francisco where rent was astronomical and staying in one place meant reaping the benefits of rent control. The bedroom was messy, typical of busy people, but nothing she saw suggested a struggle.

Annabelle shifted her attention to the victim. Though the position in San Francisco was her first official M.E. job, she’d worked as an examiner for almost four years in residency and she felt comfortable in the presence of the dead. While some medical examiners barely looked at a body prior to opening their kit and setting to work, Annabelle wasn’t one of them. For her, first impressions were crucial. It was one of the reasons the job was harder when the body had been moved.

Diane Reilly, however, lay where she had died in her bed. A heavy blanket was pushed to one side, the comforter and sheets bunched at her feet when the paramedics had examined her and determined she was beyond their help. Although she was slumped to her left side in death, it appeared that she had been sitting upright with pillows propped behind her. The two remote controls on the bed beside the body suggested she had been watching television. With her eyes closed, Reilly might have been asleep, except for the bluish tint of her lips. On the bedside table was an empty prescription bottle of oxycodone in the name of Peter Nelson, and a tall opaque glass with a white straw. The bottom of the glass was coated with a watered-down, milky residue and with her hands gloved, Annabelle lifted the glass to her nose. Mint. She studied the small bits of dark in the residue. A mint chocolate chip milkshake, if she had to guess.

Annabelle swiped the thermometer across the victim’s forehead. Her temperature was 95.9, suggesting she’d been dead less than two hours. The room was warm—the thermostat read 74—so the decline in temperature should have been about 1.5 degrees per hour. Annabelle’s watch read 7:19, which indicated Reilly had likely died between 5:30 and 6 p.m. Identifying such a narrow window for time of death was rare and could make it easier to determine cause of death. A lucky break.

Annabelle propped a Tyvek-covered knee on the bed and reached across to examine the victim’s head and neck for signs of contusion, but the skull was undamaged and the cervical vertebrae seemed perfectly aligned. Nothing to suggest injury. Annabelle pushed up the victim’s sweatshirt sleeves one at a time to check the skin on the hands and forearms. There was no apparent bruising, no lacerations, no needle marks; only a single, thin Band-Aid wrapped around the middle finger of the left hand. Annabelle removed it and found a shallow cut. The epidermis was closed and whatever inflammation there might have been was gone, suggesting the wound was at least a couple of days old. Kitchen accident, probably. All very mundane.

Next, Annabelle lifted the sweatshirt from the victim’s waist, exposing her belly. At the sight, she drew back momentarily, feeling a heaviness in her own belly as her gaze locked on the fundal bump. The victim was pregnant. I hate the pregnant ones. From the main room, the sobs from Reilly’s boyfriend grew louder.

Statistically speaking, a pregnant woman was less likely to commit suicide than a non-pregnant one. Annabelle couldn’t recall where she’d read that statistic, and it might not matter here. Recognizing her own bias, she worked to put it in check, to push her own memories aside; pregnant victims were hard for everyone.

Annabelle jumped at the voice and stood from the bed. Across the room, Hal Harris’s bulk filled the doorway. At 6’4” and somewhere north of 220 pounds, Harris was an imposing figure. His flawless dark skin made his hazel eyes green, especially in bright light, and his stern expression suggested that he was not someone to mess with. Behind the façade, however, Hal was both easy-going and extremely kind; although Annabelle tried to avoid favoritism, Hal was her favorite homicide inspector.

“I’m still doing the initial exam,” Annabelle said. “Won’t know until I have her at the morgue.”

“Looks like an overdose, right?” Hal asked. “Boyfriend’s real broken up.” He rubbed his bald head the way he did when he was thinking. “Girlfriend kills herself… and she was pregnant.”

Momentarily breathless, Annabelle stooped down to her M.E. case and removed the top shelf, setting it on the floor to retrieve her notebook. She moved slowly, conscious of her own flat belly, giving herself time to gain control of the memories that threatened to drown her.

Hal lifted the glass from the bedside table. “What’s this?”

“Mint chocolate chip milkshake, I think,” Annabelle said, her heart rate slowly returning to normal. “Or it was, anyway.”

Hal sniffed the glass before setting it on the table. “A milkshake, huh? One last treat on her way out?”

Something about the notion of making a milkshake in order to commit suicide struck Annabelle as odd, and she felt her bias stretch out a suspicious tentacle. “Prescription’s in the name of Peter Nelson.”

She rose slowly and opened her notebook, her pen poised as she nodded toward the doorway, and the man who could still be heard crying from the other room. “He tell you what happened?”

“They were supposed to go to the neighborhood’s annual block party today,” Hal said. “At the last minute, she says she’s not up for it, so he goes alone. He’s only gone about an hour and when he comes in, he finds her.”

Hal handed over the victim’s driver’s license. Annabelle scanned it for the woman’s date of birth, still getting used to the appearance of the California licenses. June 24th. The victim would have been twenty-nine in a few weeks.

“Boyfriend says there’s a history of depression in her family,” Hal said, cutting into her thoughts. “She was on an antidepressant for years. Got off when she found out she was pregnant.”

Annabelle made a note to check the victim’s medical records.

“I’ve got patrol talking to some of the neighbors to confirm his alibi, but seems pretty cut and dried,” Hal continued. “History of depression, off her meds…” He looked around the room. “Unless you find something else, we can close this one pretty fast. Which is good news, because I need you to go over the Fischer autopsy again.”

Fischer was a local politician, poisoned three nights ago while eating dinner at his favorite restaurant. There’d been sixty other diners, along with a staff of twenty-four, in the building at the time.

“We need to see if we missed anything,” Hal continued, stifling a yawn. “You think you’ll have time for that tomorrow?”

“I’ll try to get to it,” she told him. She nodded toward the living room where the boyfriend was still crying. “He mention how far along she was?” she asked, lowering her voice.

Annabelle wrote “16 weeks” in her notebook, then “28 years old.” She studied the victim’s face. No bags beneath her eyes, no gaunt cheeks—none of the physical signs that should go along with suicide. This victim seemed at peace, as if she were resting, but Annabelle knew there was no single look for a suicide. Perhaps this woman had decided life was too much, or maybe there was something amiss. Annabelle tried to stop her mind from running in circles. Making something out of nothing because of her own past was the last thing she could afford to do.

Annabelle returned to the victim and lifted her hands, studying them a second time. Still, she found no defensive wounds. Was there something she was missing?

Why did she have the sense that this wasn't what it seemed?