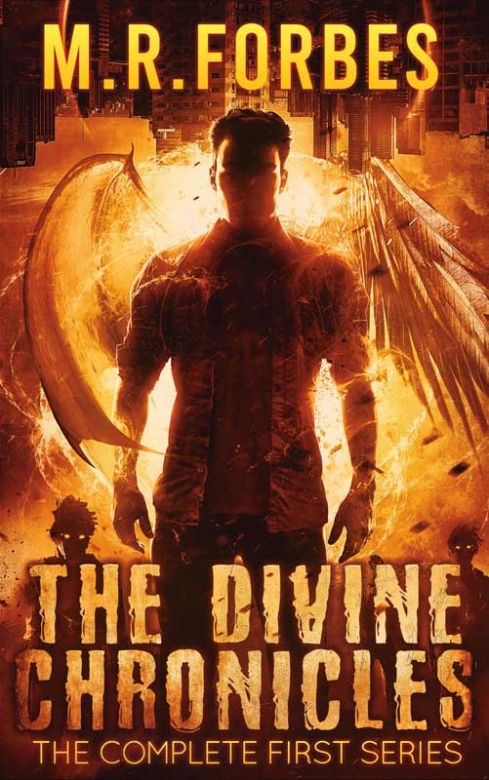 M.R. Forbes Founding author
Follow
Heaven and Hell are fighting for the fate of humankind, and humankind has nobody to fight for them. Until now.
Genres: Fantasy Action & AdventureNew Adult & College
Buy now
Available in:

Heaven and Hell are fighting for the fate of humankind, and humankind has nobody to fight for them.

Okay, I’ve made a few mistakes, but I’m just a regular guy trying to get by in this messed up world.

There’s only one complication:

I said this world was messed up, didn’t I? You see, I got caught in the middle of the war between good and evil (yeah, it’s a real thing), killed and sent to Purgatory (also a real thing) where I was intercepted by Dante (yup, he’s real too).

He had some business he wanted to discuss.

It turns out, my soul is a perfect balance of good and evil, and my ancestry happens to be an unholy triumvirate of angel, demon, and human, which apparently is incredibly rare.

It turns out, Dante has the power to send me back to the land of the living, along with some cool new tricks and instructions on how to use them. Too bad this sexy vampire girl crushed them while I was crushing on her.

Oh yeah, it also turns out the Queen of All Demons managed to get her hands on the Holy Grail, and now the only thing standing between her and Armageddon is, well…

It’s not like it’s the end of the world if I fail.

If you love rooting for the underdog, vampires, werewolves, angels, demons, action, adventure, humor, and a hint of romance, you’ll love the Divine Chronicles. Pick it up today!