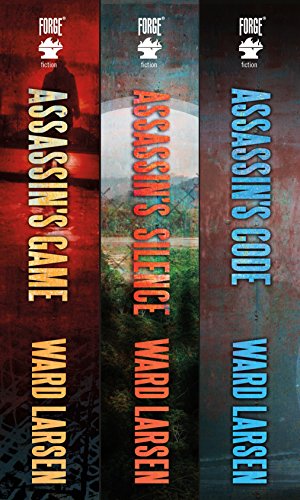 Assassin's Game
David Slaton has a good life. He has a new wife and a house in the Virginia suburbs. But he also has a dark past. Slaton is a former kidon, the most lethal Israeli assassin ever created. After decades of work, a brilliant scientist has taken Iran to the threshold of its dream—a nuclear-tipped ballistic missile. With a spy lurking high in its ranks there is only one option: bring back Slaton. The kidon has vowed to never kill again, but when his wife is attacked and forced to flee across Europe, events force his hand.

Assassin's Silence
When it comes to disappearing, David Slaton has few equals. Police in three countries have written off trying to find him. His old employer, Mossad, keeps no forwarding address. Even his wife and son are convinced he is dead. So when an assault team strikes, Slaton is taken by surprise. He kills one man and manages to escape.

Assassin's Code
Former assassin David Slaton discovers a cryptic message: on a memory stick, a photograph of the man who will soon assume command of DGSI, France’s elite counterterrorism force. With that country reeling under a wave of ISIS attacks, Zavier Baland will be trusted to make the Republic safe again. The problem—Slaton has seen Baland’s face before. He is Ali Samir, a terrorist Slaton is certain he killed fifteen years earlier. Slaton keeps a breakneck pace, traveling to Tel Aviv, Paris, and the deserts of Syria. In the end he uncovers a labyrinthine plot—and one that only he can stop.