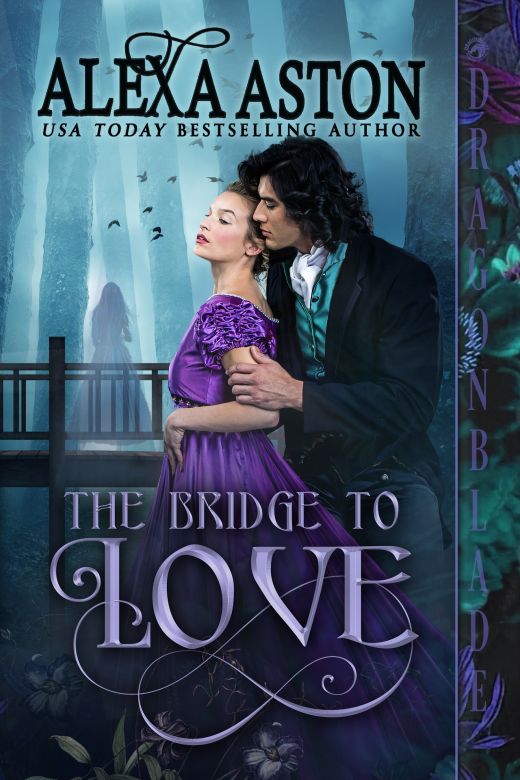 An unnamed ghost haunts a bridge crossing the Medway River, seeking help from newlyweds
who promise to right a 500-year-old wrong . . .

Elric de Bergville of Windsong goes against his father’s wishes and weds his childhood
sweetheart, Lady Anne Glanville, at the center of the bridge which connects their families’
properties. But the lovers are betrayed, cruelly separated by death and time, forced to walk the
earth separately, within sight of one another.

Lady Iris Langley returns to Glanbury, her father’s country estate, after a decade of living in
London and encounters the Medieval ghost she befriended as a child. Iris learns the ghost is
named Anne but can find no record of what happened to her. In despair, she turns to Crispin
Bergville, her childhood friend and now Earl of Windthorst, whose estate, Windsong, lies across
from Glanbury, separated by the Medway River.

Sparks ignite between the pair and soon Iris and Crispin are betrothed. When the couple
discovers initials inside a heart carved into the center of the bridge connecting their families’
estates, they believe it is the key to unlocking Anne’s story. The pair vows to learn the truth and
find a way to set Anne’s spirit free.

Will Iris and Crispin be able to solve the mystery—or will Anne and Elric be doomed for all
time?

I write in the Regency & Medieval eras--and The Bridge to Love was a chance to combine those two times in history!

Lady Anne of Glanville stood at the edge of the forest beside the old oak tree. She looked across the way, her gaze on the wooden bridge spanning the Medway River, the link between her father’s property and that of Lord Windthorst of Windsong. Elric had told her to meet him here early, before morning mass began, because he had something very important to discuss with her. She spied movement on the other side and her heart sped up when Elric appeared.

Anne loved Elric with all her heart.

She couldn’t remember a time when she hadn’t known the handsome man who now began to cross the bridge to her side of the river. Two years older than she was, Elric had recently turned eighteen. He had fostered at Lord Morran’s over the years, coming home only infrequently, but always making certain that he saw her when he returned to Windsong. She had watched him grow from a young, sturdy boy into the man that now ventured across the bridge, tall and broad-shouldered, with sparking blue eyes and thick, golden hair.

He spied her in the darkness and hurried toward her.

Reaching her, he took her hand and said, “It seems years since I last saw you, Anne.” His eyes roamed her face as if he had asked her a question and awaited some kind of answer.

“I was glad to receive your message,” she told him. “It is good to see you, Elric. It always is.”

Suddenly, he seized her shoulders, his eyes dark.

“I have something I must ask you,” he said solemnly.

When he didn’t speak, Anne asked nervously, “What do you wish of me?”

He bent, pressing his lips to hers for the very first time. They were warm and soft as they brushed against her own.

Her heart sang as she wrapped her arms about his waist.

The sweet kiss went on, warming her blood, stirring something unknown within her. Her childhood dreams were now coming true.

Elric broke the kiss, gazing down upon her now with a confident smile. “I want us to wed at once,” he shared.

His determined words gave her pause, as if something stood in their way. “Why? What is wrong? What are you not telling me?”

Anger flushed his face as he said, “Father wishes for me to wed Lord Bronwyn’s daughter. He wants a union between our two families,” Elric explained. “The king favors Lord Bronwyn. Father hopes if I wed the earl’s eldest daughter that our family will bask in that favor, as well.”

“We cannot go against your father’s wishes,” Anne said dully, hurt filling her as the brief happiness had been snatched away. “I am a dutiful daughter and you have always been a dutiful son.”

“He doesn’t understand what I hold dear,” Elric said. “I have loved you from the time we were children, Anne. I want to go on loving you throughout time.”

“But how can you go against your father?” she asked. “If we wed, he would hate you—and he would certainly hate me.”

“He will accept what is,” Elric predicted. “I promise you that, Anne. I have already spoken to our priest, Father Michael. He knows my heart and how I feel about you. He is willing to help us. The question is, can you wed me under such circumstances?”

Anne swallowed, her thoughts swirling. She turned away from Elric, needing time to think, but knowing she didn’t have that luxury. Her eyes turned to the tree trunk in front of her. The massive oak had stood here for many years. A set of initials were carved into it.

They had been a love match and her mother had brought Anne to this tree from the time she could walk, pointing out what her father had scratched into the wood. Though her mother had died three years ago, she still lived in Anne’s heart—and that of her father’s. Lord Glanville had sworn never to remarry, wanting to remain faithful to the only woman he ever loved.

Anne possessed that kind of love for Elric. She would have her father’s support in this endeavor. It would be difficult since Lord Windthorst had already chosen a bride for his son but Anne promised herself to be the best wife she could be to Elric and hoped that would win over his father.

She turned and faced her true love and saw the worry that filled his face.

Taking his hands in hers, she said, “I will wed you anywhere. In any place. At any time. I love you, Elric. I always have. I always will.”

He beamed at her, the doubt falling from his face. “We will meet at midnight,” he informed her. “Father Michael says we must have a witness to the marriage.”

Anne frowned. “Who could we tell about this?”

“I have decided to ask Bickford to observe our union.”

Anne did not like Elric’s cousin. He was three years older than Elric and had come to live with the de Bergville family after his father’s death over ten years ago. Bickford was far too arrogant for her taste. Knowing, though, that they required a witness for the ceremony, she could understand why Elric wanted to ask his cousin. Elric was an only son and family meant a great deal to him. It made sense to invite Bickford to act as their witness.

“When will you tell him of our plans?” she asked.

“After we sup this evening in the great hall. Bickford is in charge of the night patrols around Windsong. If need be as we leave the castle’s gates, we can use the excuse that he wants to make a personal sweep about the estate. No one will question him.”

Elric framed Anne’s face in his large hands and said, “I will count the minutes until we can be together.”

He lowered his mouth to hers again and the kiss brought her reassurance.

Breaking the kiss, he smiled down upon her. He took her hand in his, entwining their fingers, and pointed to the oak tree.

“I have always enjoyed the story of your father carving these initials into this tree. I want to do something similar.”

As the sun began to break along the horizon, Elric led Anne to the center of the bridge, where he stopped.

“Just as many people will see your parents’ initials on that tree over the decades to come, I also want others to see tangible evidence of our love.”

He released her hand and pulled a blade from his boot.

Anne watched as Elric carved a heart into the handrail, a warm glow filling her. Then he carved his own initials into the wood.

“We will wed at this spot at midnight,” he proclaimed. “And once we have been joined as man and wife, I will add your initials here. It will be a spot we bring our children to over the years and tell them our love story.”

This time, it was Anne who wanted a kiss. She gripped Elric’s tunic and pulled his mouth down to hers. Their lips joined together, just as their bodies would after they were pronounced as one in the eyes of God.

She pulled away, gazing steadily at Elric and said, “I love you.”

Her beloved smoothed her hair. “I love you, too, my sweetling. Until tonight.”

They parted, each walking in the opposite direction of the other across the wooden bridge. When Anne reached her side, she turned, seeing that Elric had also paused. She blew him a kiss and he pretended to catch it and tuck it inside his tunic.

Anne made her way back through the woods to her home. She hurried toward the chapel for morning mass, which was about to begin. Peace blanketed her.

When dawn broke tomorrow morning, she would be a married woman.