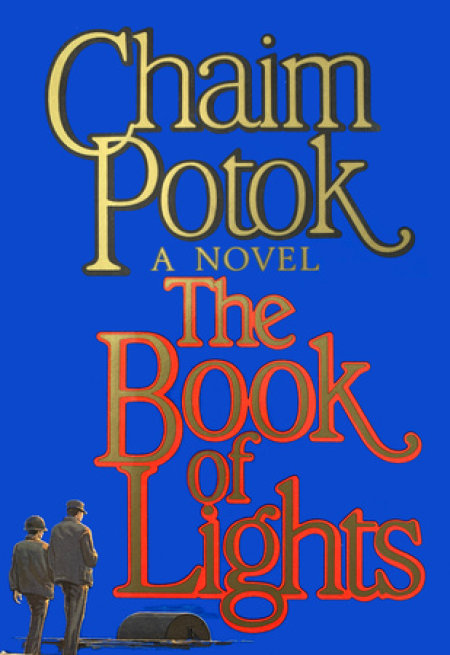 Gershon Loran, a quiet rabinical student, is troubled by the dark reality around him. He sees hope in the study of Kabbalah, the Jewish book of mysticism and visions, truth and light. But to Gershon's friend, Arthur, light means something else, the Atom bomb, his father helped create. Both men seek different a refuge in a foreign place, hoping for the same thing....

He arrived in Korea in a snowstorm on a huge big-bellied aircraft named the Thin Man. A little over a week earlier he had written his farewell to the man whose reluctant disciple he had been for a long and strange year, and, in parting, embraced his aunt and uncle and the girl he thought he might marry.

He was raised by this aunt and uncle, who was his father’s brother. He had been staying with them when his parents died, and he simply stayed on. He slept in a narrow bed in a small and dingy room. They lived in a sunless ground-floor apartment in an old five-story red-brick building where his uncle collected the rents for the owner no one ever saw. The house was the talk of their Brooklyn neighborhood. There was something wrong with it, something had gone awry from the very beginning. The furnace was whimsical and tended to die when it was most needed; valves stuck, pipes leaked, faucets gushed unevenly when turned on, or gave off explosions of air; electrical wiring shorted mysteriously; pieces of brick worked loose and tumbled to the sidewalk; the tar paper covering of the roof, no matter how recently replaced, became warped, then buckled and cracked. But the rents were low, the apartments were always filled, and his uncle, who earned an erratic livelihood from the badly organized and decrepit Hebrew bookstore he operated in the neighborhood, was kept very busy. Often his uncle himself fired up the furnace, on those early winter mornings when the janitor was in a drunken stupor from which he could not be roused. Janitors came and went. His uncle’s job was not an easy one.

He was eight years old when his parents died. His sharpest memory of his father was of the day they climbed together to the head of the Statue of Liberty. “You want to go up in the elevator or climb the stairs? Choose,” his father said happily. He chose the stairs. He was seven years old, and his father carried him the last dozen flights up. He clung to his father and smelled the odor of his strength. It was a brilliant blue day, and they looked out across the water at the distant curve of Brooklyn shoreline. “That’s where we live, Gershon,” his father said. “Yes, it’s a beautiful world. But you must learn to make smart choices or it will hurt you.” Later that evening they did a picture puzzle together. It was a gift his mother had just given him for his seventh birthday, a puzzle map of the world. He and his father spread the pieces on the living-room carpet and worked on it together until it was done. His mother laughed and held him, and he remembered her kiss and the warmth of her face and the sweet smell of her perfume.

That was almost all he really remembered of his parents. There were pictures of them in the apartment on the mahogany end table near the sofa, but he felt no connection to them. They had gone off to what was then Palestine to look at some seaside property near Tel Aviv that his father had purchased. This was in 1937. They went out one night to a café after having been warned that the streets were dangerous, and were caught in a crossfire between Arabs and Jews. That was a bad time in Palestine—riots, demonstrations, ambushes. They made a poor choice and were killed.

His aunt and uncle decided to have them buried on the Mount of Olives outside the Old City of Jerusalem, the most sacred of Jewish cemeteries. Another poor choice. The cemetery was captured by Jordan in the Israeli War of Independence.

He grew up with a cousin six years older than he. Tall, blond-haired, his cousin seemed to move through life with a special grace. He loved his cousin, followed him, emulated him, hung on his every word. His cousin was killed during the Second World War.

That was a bad time. He was about fifteen when his cousin died, and he dreamed about him a lot, heard his voice, had sudden sharp visions of him in odd places—trolley cars, crowded streets, classrooms, ballfields. In those visions his cousin would be somewhere outside him, clearly visible but not always easily located—he seemed to move about—and they would talk. Slowly, very slowly, the dreams and visions became sporadic, faded, ceased. There were pictures of his cousin in the apartment. He could never look at them for any length of time without feeling pain and bewilderment. His cousin had gone off to war with a jaunty smile and a promise to return. He was a fighter pilot, and they never even found his body.

His aunt never recovered from the death of her only child. She would often talk to herself as she went about the apartment in her apron—she was rarely without an apron. She asked herself questions, answered them, questioned the answers. “Are you listening? Listen to an old woman. Why against the Japanese? Ah? Why? Tell me. They are an enemy? There aren’t enough goyim in America to fight the yellow people? If he had to die, it should have been against the Germans. Where is the sense? A wagon-driver runs his business better than you run the world. How could you waste such a life?” She was in a dark dialogue with the demons—or the God—of catastrophe.

His uncle, on the other hand, developed a hoarse dry nervous cough and lapsed into almost total wordlessness. His eyes turned to pools behind the rimless glasses; the white and dark of the sockets blurred, became indistinguishable. Their sole light seemed to come from the occasional sudden flarings in the sun or in the fires of the furnace. He continued to run the apartment house, but talking seemed to weary him. He would address tenants with an opaque brevity that bordered on conventional notation. “Can’t.” “Don’t “know.” “Maybe tomorrow.” “Too cold?” “Fix soon.” “Even God doesn’t.” “Janitor drunk.” “Plumber Thursday.” “Insane world.”

From the age of fifteen until the age of twenty-one he lived in the apartment world of his aunt’s whispery talking and his uncle’s coughs and brooding silence, and he did not know which was more frightening. For a while after his cousin’s death he thought his family had somehow been singled out for a special curse. But he talked to friends and found that throughout the neighborhood ran a twisting river of random events: parents died in slow or sudden ways, children were killed, relatives slipped young from life. The world seemed a strangely terrifying place when you really thought about it. He tried not to think about it too often.

Sometimes to get away from thinking about it he fled to the roof of the apartment house. There, on the cracked and reeking tar paper, he would sit with his back to the brick wall of the stairwell and gaze up across the adjoining rooftops to the sky. Usually it was a smoky stench-filled sky, but on occasion it was clear. One night he saw the vast heaven of stars clear as he had never seen it before, stretching from one end of the city to the other. It was a cool summer night, and as he sat there he heard a soft whining sound and a stirring in the darkness. He was about sixteen at the time, a boy of the streets, and not given easily to fear. In a corner of the roof, near a cluster of pipes, vents, and bubblelike protrusions, he found a bitch whelping her pups. She was a black mongrel with a white spot over one eye, and she growled softly as he approached. He watched the pups come, listened to her soft whimpers, saw her tear and lick off the sacks, clean the pups, push them aside, lie back, and wait for the next. He had never seen life born before. He knew the street talk about pricks and cunts, had read the porno books passed around in school yards, seen the photographs of the various positions. But the birth of these pups stirred him in a strange way. He saw them emerge from the organ that he and his friends would talk about with leers on the street. But here on this roof the bitch and her body seemed filled with a singular radiance. Life was being created before his eyes. He trembled, soared, wanted to shout and weep, and remained very still. He reached out to touch one of the newborn pups, and the bitch raised her head and bared her teeth. Overhead the star-filled sky seemed to drop down upon him. He felt all caught up in the life of heaven and earth, in the mystery of creation, in the pain and inexhaustible glory of this single moment. He wanted to hold the bitch to himself, caress her, caress something. Instead he reached up and brushed his hand across the sky and felt, actually felt, the achingly exquisitely cool dry velvet touch of starry heaven upon his fingers. He cried a little and shivered in the chill night air. Finally he thought it time to go back down, his aunt would become concerned about his absence.

He returned there the next morning. No bitch, no pups, no sign that life had been created on that sodden smelly roof. He wondered if he had dreamed it. He asked around the house. No one knew anything about a dog on the roof. He wandered through the neighborhood, casually questioning friends. No one was peddling puppies. A mystery.

But that rooftop feeling of awe and that caress of sky and stars were unforgettable. What an encounter that had been! He never forgot that moment. He hoped it would return one day. He felt he would be changed in some extraordinary way if it ever returned. He began to wait for it.