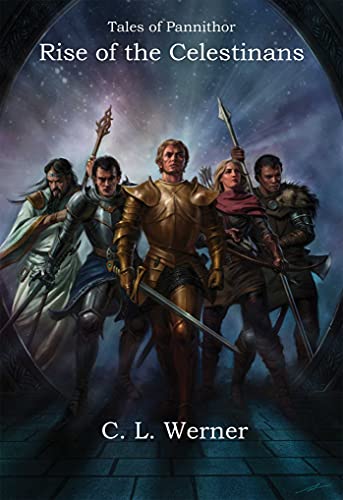 A new age descends on Pannithor when elven mages invoke powerful rituals that cast open the barriers between worlds.

A new age descends on Pannithor when elven mages invoke powerful rituals that cast open the barriers between worlds. Through arcane gateways arrive beings of incredible might and wisdom, the star-flung Celestians! Entities whose names will echo down through the ages. Mescator. Valandor. Liliana. Kyron. Karinna. Fulgria. Belkon. Oskan.

The Celestians have journeyed to Pannithor to bestow on its inhabitants their great knowledge and by their guidance bring to the mortal races an era of peace and prosperity. But the powers that hold sway in the ancient kingdoms will not meekly fade into nothingness. The cruel priesthood of Bhanek dominates Elvenholme. In the human realms of Primovantor and Ahmun, the sinister disciples of Shobik hold sway. If they would free the people they've come to help, the Celestians must set themselves up as new gods and sweep away the vestiges of the Primogenitors. But there is one ancient god that is far more than a mere echo of former power. Before they can truly free the mortals of Pannithor, the Celestians must defeat not merely the followers of their greatest foe, but the god himself, the savage Korgaan!