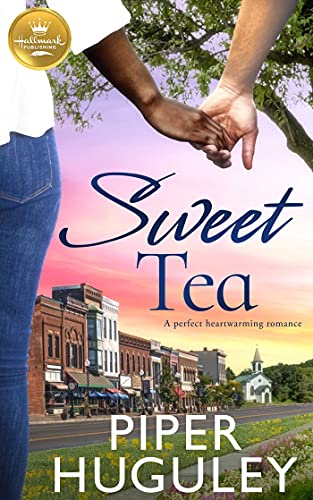 Southern traditions, history, and hope come together in author Piper Huguley’s heartfelt romance from Hallmark Publishing. Althea Dailey has succeeded beyond her wildest dreams: she’s about to make partner at her prestigious law firm in New York. So why doesn’t she feel more excited about it? When she has to travel South for a case, she pays a long-overdue visit back home to Milford, Georgia. To her surprise, a white man she’s never met has befriended her grandmother. Jack Darwent wasn’t interested in the definition of success dictated by Southern high society. His passion for cooking led him to his current project: a documentary and cookbook about authentic Southern food. Althea’s grandmother is famous for her cooking at Milford College, a historically Black institution. But Althea suspects Jack of trying to steal her grandmother’s recipes. Despite Althea and Jack’s first impressions of one another, they discover they have more in common than they’d guessed…and even as they learn about one another’s pasts, they both see glimmers of a better future. This Southern small-town romance includes a free Hallmark original recipe for Grandma’s Biscuits and Gravy.

Then, walking along, laughing and talking, came her dear sweet grandmother on the arm of this drifter person. He resembled Apollo more than the devil, now that she could get a close-up look at him. His hair was not as short as it was in the picture on the website, and it curled around his head. His hair, like some kind of god from Greek mythology, made him appear to be otherworldly. She had never seen a man like Jack Darwent, and the fact that her grandmother was giggling and laughing like a teenager didn’t give her any comfort.

Slipping a Tums between her lips, Allie chewed on the chalky fruitiness to help calm her, to keep the acids in her stomach from eating her up from the inside. She stood and faced the two of them, her grandmother in her little chef’s coat, bent over but walking on the protective arm of this man, who wore a tightly fitting polo shirt with the expensive logo on it and more snug jeans with navy blue deck shoes.

Oh yes. A devil for sure.

Standing there, Allie pushed back her chicly cut bob over her ear. “Granda,” she called.

Her grandmother froze in her steps. “Oh my Lord. It’s Tea. She come home to me, like I’ve been praying.”

The tremor in her grandmother’s voice stirred Allie in an unexpected way so that she didn’t realize Granda had called her by her old childhood name. A lump rose up in her throat as her grandmother uncertainly tried to cross to her on the uneven pavement. Allie went to her instead, taking big quick strides down the sidewalk in her Jimmy Choos, but when she reached her, Granda stumbled a bit. In order for them both not to fall crashing to the pavement, Jack Darwent reached his big arms out, steadying both of them.

“Whoa there, ladies,” his voice boomed.

“Jack, you are making a specialty out of saving the Smithson women,” Allie’s grandmother purred.

Allie shook his hold from her, because all of a sudden, she felt dizzy, and she didn’t like any fizzy feeling fuzzing up her head.

“Tea, meet Jack Darwent. Jack, this is my grandbaby that I raised up, Althea, but when she is in Milford, I call her Tea.”

“What are you doing here with my grandmother?” Allie spoke entirely too sternly, because if she didn’t, her legs would turn to egg noodles at the way his voice sounded when he spoke her old childhood nickname.

“Excuse me?” His eyebrows raised up.

She gulped at the surprise on his face.

“Tea, that is no way to be. Excuse her, Jack. She been living up in the North with rude Yankee people and forgot her upbringing I gave her.”

“Granda, I didn’t mean to be disrespectful. I just want to know who this…this…man is. He’s been here for a long time.”

“It’s so he can make the best movie of me that he can.” Her little grandmother straightened up and Allie’s heart danced. She didn’t want Granda to be mad at her, so she softened her tone.

“He’s making a movie of several subjects, Granda, not just you.”

“I film at my leisure, Miss Tea. Your grandmother is particularly fascinating.” An amused smile formed on one side of Jack’s lips.

Tea, Allie, whoever she was, had had enough.